David Erik Nelson joins us this week to talk about his new cookbook, Punk’d Squid, in which there are many recipes for sauce, secret and otherwise. Fear not, Dear Reader: you can make them all with two hands and/or ten fingers…

I want to talk about voice–about your capital-V Voice as a writer, and the little voice of each specific piece you write–but first I want to tell you about how this guy I know makes steaks.

He goes to the butcher and buys a few good cuts of beef.  Back home, while these steaks drain on the cutting board, he makes his “sauce.”  This sauce consists of Worcestershire sauce, malt vinegar, salt, pepper, brown sugar, ketchup, maybe barbecue sauce, whiskey (or whatever he finds in the cupboard), beer (maybe), wine (why not?), soy sauce, and season salt.  He marinates the steaks in this sauce for an indeterminate period, then sears them briefly on a high-BTU gas grill. 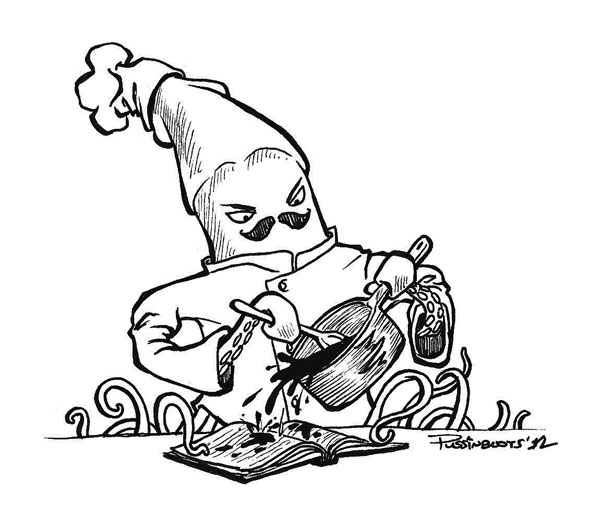 If you’ve spent any quality time in the kitchen, then you see how absurd this “sauce” is:  It’s five-plus kinds of salt, four kinds of sugar, four kinds of vinegar, the beer is mostly water . . . it’s a crazy hash.  The result is okay, I guess–it’s hard to go wrong with salt, sugar, and vinegar (which is why it’s in basically every bottle in your refrigerator door)–but it doesn’t particularly taste like a cut of fresh venison, or like grass-fed Delmonico, or like freezer-burned chuck roast.  It doesn’t particularly taste like anything.  That meat might as well be pressed tofu or a slice of Quorn (both of which, incidentally, I like just as much as I like a quality steak; I’m an equal-opportunity consumer).

I bring this up because I used to make steak the same way–because everyone is inclined to throw “just one” dash, sprinkle, and dollop into every recipe to give what we imagine is a distinctive little flourish that screams “This is ME!”  And we don’t confine this impulse to the kitchen.

It’s not something you pour over a story once the meat and veggies–the plot, the characters, the setting–are cooked and ready to plate.  Steampunk isn’t alt-history slopped with a ladle of cogs and dirigibles; literary fiction isn’t YA with the last half of the final chapter cut off and a schmeer of 50-cent words.

The voice of a piece–and your Voice as a writer–arises from stripping everything else out, not piling more crap on.

Right on the face of it, I’m sure this sounds absolutely absurd. On the one hand, all I’m basically giving you is Strunk and White’s nearly century-old chestnut to “omit needless words” (Rule #13).  On the other, the guy saying this–to whatever degree he might be at all notable–isn’t noted for sparing the verbiage.

Take, for example, Poor Mojo’s venerable Giant Squid.  For about a decade I co-wrote Giant Squid advice columns on a weekly basis, usually a few thousand words, occasionally a dozen-thousand words or more.  Over the course of those ten odd years we wrote upwards of a million words of Squid.  (To this day it shocks me to say that; there are several complete and unpublished novels tucked in there.  There are so many pieces of Squid that I come across columns I totally forgot we wrote, and get LOLed by them all over again.  I’m like an Alzheimer’s patient, hiding my own Easter Eggs.)

In part, this project began as an exercise in puking all over the Strunkian edicts we’d been schooled in.  It was the ’90s, and we’d been trained to be “lean” literary writers, bare-knuckles chaps like Carver and Hemingway.  “Feeding the Squid” was our attempt to exorcise ourselves of the lush, verbose, oratorial 19th Century voices that still rung in our heads from our public-library boyhoods.  We were trying to write the Twain and Lovecraft out of our bones.

This exercise immediately sets you on the horns of the Voice Dilemma: In order to work, a piece needs to be long enough to carry the data readers want (i.e., the story, the info, the facts, the Truth, the fire).  But each word is cumbersome to read; it adds drag and saps the reader’s momentum.  So, every word has to add value slightly in excesses of the energy it demands. (If you had a single-sex education and are male, your English teacher might have introduced this to you as the “Skirt Rule”; with apologies: “All writing should be long enough to cover what matters and short enough to be interesting.”)

There is no room for superfluous words.  Nonetheless, even journeymen writers have a tendency to cook up a perfectly edible lil tale, and then finish it by slathering on the voice gravy–or, at the very least, to think of their “Voice” as being encoded in some little non-essential flourish they “permit” themselves, rather than in the undecorated main course they’re being paid to proffer.

The result is a goopy, unpalatable mess.  It can be “interesting,” but take a second to think about all of the things folk say were “interesting” rather than “good.”

FYI, this tendency–to make the meal then slop it in voice gravy–doesn’t just go for squidified Deadwoodian said-bookism.  We tend to treat any voice this way, even the leanest gumshoe banter: we write our story, and then cram in “dolls” and “molls” and “heaters” and “mickeys.”

Your Voice, even an overblown Giant Squid of a voice, is the result of reduction: You write from the start with too many words; too many tangents; too many footnotes; and three modifiers for every miserable, skinflint, parsimonious noun.

Then, once your fat, rosy-cheeked baby is finally born, cooing in her hospital blanket, you put her on the table, flay her, and into the stockpot she goes.

I cut my teeth on Stephen King and David Foster Wallace.  As I’ve gotten older, what’s really struck me about the two–who aren’t generally grouped together–is how much they fundamentally have in common as writers:  1. They both bring remarkable clarity to remarkably complex situations (in the case of King it’s his ornately multi-threaded novels, and for DFW it’s in his treatment of the intricacies of popular culture and mathematics; I don’t feel like DFW’s fiction is a paragon of clarity by anyone’s measure).  2. They do this in a voice that is at once casual and precise.  I know that sounds nuts: Both are guys that regularly top the 1000-page mark without batting an eye or apologizing.  But look at those pages, those sentences, and you see that their voices arises not from decorating workmanlike prose, but in shaving down a mound of logorrhea to the vital words that make the sentences go.  They don’t write long because they are slathering on a bunch of frosting and garnishing their books with radish rosettes and spiral-cut beets; they write long because they’ve got lots to say, and a lot worth saying.

Listen: I take it back–Voice is gravy:

Voice is the economical result of not throwing anything away, but instead boiling and scrapping until what you have left is as concentrated as possible, a half-once of liquid with more flavor than the chops you started with.  Every good story will make its own gravy.

And your Voice emerges from the process of cooking up story after story after story in the same iron skillet, until that skillet is so seasoned that you don’t need oil to fry an egg, and any steak seared on it comes off tasting like it put you back $50 at a necktie establishment, even though you didn’t even bother to sprinkle salt on the pan prior to sizzling.

David Erik Nelson’s fiction has appeared in Asimov‘s and Shimmer, and in anthologies like The Best of Lady Churchill’s Rosebud Wristlet and Steampunk II: Steampunk Reloaded. His celebrated steampunk novella Tucker Teaches the Clockies to Copulate is now available for Kindle through Amazon (and other formats at davideriknelson.com).  He co-created Poor Mojo’s Giant Squid with Morgan Johnson and Fritz Swanson, and regrets nothing.  Look for the Giant Squid in the upcoming anthology Steampunk III: Steampunk Revolution.