Ferrett appeared in Shimmer #13 with a story involving, of all things, a unicorn. And a magical mirror. He’s always been turning tropes on their head, and does so again in his debut novel from Angry Robot, Flex. 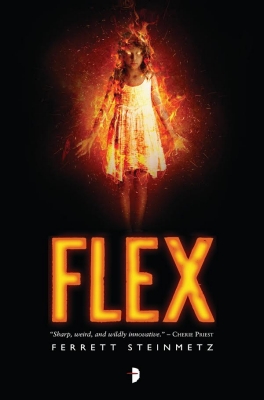 Tell us how and where Flex began for you.

True fact: When I sent this to Seanan McGuire to see if she’d blurb it, she called me up and asked, “So how much Mage: the Ascension did you play before you came up with this?”  And I said, “Ya got me.”

But yes, my group was roleplaying, and someone joked about the idea of brewing magical drugs.  I was hugely into Breaking Bad at the time, and I thought, “Wow, how much weirder would that be if it wasn’t just drug dealers, but magical drug dealers?” So the wheels started turning.

But the problem was that I generally don’t like magic.  It’s got what I call “Doctor Strange syndrome” – what can’t Doctor Strange do?  What are his limitations?  All the guy has to do is wave his hands and chant about Agamotto and he can turn back time, he can erase the world’s memories, he teleport to other dimensions.  And that’s fun for a while, but eventually you start struggling to find challenges that the audience can understand – it’s more fun if the audience knows when the hero’s about to crack.

So I thought a lot about what I thought magical drugs could do that no other drug could, and decided to explore the ramifications of Harry Potter’s luck potion.  Seriously, why is anyone learning any other kind of magic?  I know it’s difficult, but if you devote your life to brewing up batches of Felix Felicis, what else do you need to do?  So I thought, “Well, if you get good luck for a while… you must get bad luck.”  And then I started tying that into Unknown Armies’ obsession-based magic system, and the next thing you know I had a guy who was so devoted to getting his insurance paperwork right that he’s become this magical champion of the insurance company.

“That guy seems the least qualified person to make drugs,” said I, and a story was born.

Does Flex have a soundtrack? (If not, why not! Get cracking!)

It does!  Sorta.  I listen to one song over and over again when I write – it’s how I keep centered on the heart of the novel.  When I’m stuck for what to do next, I just listen to The Song and everything unravels.

In this case? The Talking Heads’ “Burning Down The House.”  (The live version off of Stop Making Sense.)

Interestingly, Stephen King lied to me.  If you read Christine or any of his other early novels, you’d think it’d be super-easy to quote lyrics in your book.  But these days you have to fill out forms and go through ASCAP, and it costs a fortune.  I’m told by the publishers that Fleetwood Mac once wanted $4,000 to quote lyrics.  That’s more than many advances, man.  So you won’t find the lyrics quoted in the book, though I may scribble them in there at a signing if you ask me nicely.

Flex plays with a lot of tropes, but is notable for its use of video games, and their environments–literally plunging characters into the midst of games most SFF readers should be familiar with. If you could be thrust into any game, which would you choose?

I’d actually go with Mass Effect.  I love Bioware games, but Dragon Age is such a crapsack world. Between mages and demon infestations, I would not want to go there.  Mass Effect has the Reapers, natch, but large segments of it look pretty nice.  And given that I’d rather chat than fight, there’s a lot of talking to be done.

(Fun fact: In any RPG, I’m the guy maxing out his speaking skills.  If I can talk my way out of the final battle – *cough cough* Fallout *cough* – then I automatically love the game.

Paul’s magic stems from paperwork; where does your magic come from?

I think the reason I had a magic system based on obsession is because really, obsession is my writing superpower.  I wasn’t the most talented writer in my Clarion class; I wasn’t the most charming.  But I think I was the most dedicated, and so when Neil Gaiman told me that I wasn’t good enough yet and “You just have to write,” well, dammit, I wrote.  Every day.  Sick or well.  Psychologically healthy, or in the throes of seasonal depression.  I honed my knife as best I could, and now if Flex isn’t good enough, I’ll keep writing more.

The theme keeps turning up in my stories, though.  “The Sturdy Bookshelves of Pawel Oliszewski” is about obsession-based magic.  And my story for Shimmer, “A Window, Clear As A Mirror” is entirely about a man who can’t let go.  So I kind of deal with that a lot. 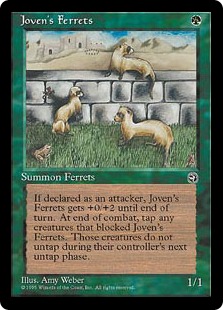 Speaking of Magic, you work for Star City Games — what is your favorite Magic the Gathering card (or set) and why?

Magic has repeatedly disappointed me by failing to produce a viable ferret. Joven’s Ferrets and Repopulate?  NOT GOOD ENOUGH, WIZARDS OF THE COAST.

That said, my favorite card is still probably Pernicious Deed.  It’s in my favorite colors (black and green), it is a distinct Rattlesnake card in multiplayer to warn people off elsewhere, and it’s super-fun.  For me.  Not you.  But hey, who wanted you to have a good time?

You attended both Viable Paradise and Clarion; did one workshop teach you something the other didn’t? How do you think both have changed your writing?

I had to knock the reader so far on her ass that she’d have to crawl back to the page.

So Clarion was where I really went, “Wow, you’ve got a lot of lazy habits that you thought you could get away with,” but man, I could not.  If there’s anything you’re aware of in your story that’s not polished to a diamond-like shine, fix that.  Because your story’s going to fall short in a hundred other areas that you’re not good enough to even see yet, so the smartest thing you can do is to amplify the stuff you know is good.

And if Clarion got me thinking about the guts of a story, Viable Paradise got me working on my prose.

Here’s a hint if you ever go to Viable Paradise: Ask Teresa Nielsen-Hayden to do her trick.  She’ll say she doesn’t know what that trick is.  “Edit me,” you tell her.

And she will sit down with your story, and begin to edit it.  She will cross out whole sentences.  She will eviscerate your words.  She will show you just how flabby and redundant and awful your prose is, and eventually what’s left will be the barest minimum of words – so few you won’t be able to believe what’s left standing.  And you’ll see how much quicker and bolder your story reads, and you’ll be enlightened.

Tell us about a fabulous book you recently finished reading.

I am currently reading Jo Walton’s The Just City, which is a fantastic hook: the Greek Gods, who are still alive today, have recreated Plato’s Republic, using everyone who ever prayed to Athene that it existed.  It’s an amazing thought experiment, and considering that I’ve loved everything Jo’s written, I’m positive I’ll love it in all of its weirdness.  She’s amazing.  I’m so stoked every day to sit in my bathtub and read it.

What’s next for you? When can we expect FLUX?

I’m finishing up a new draft of Flux as we speak (literally, I’m switching back to answer a question between each chapter), and while I have no absolute date, I expect it’ll be out sometime in 2016.  I’m also working on an as-yet-untitled science-fiction manuscript about a boy coming of age in the greatest restaurant in the universe – yes, yes, make your Douglas Adams joke now – and I have my sci-fi dystopia The Upterlife out on submission from my agent.  So I’ve got lots coming up.

But seriously.  Buy my book now, or I might not get to publish all these others!

Want to have Ferrett sign YOUR copy of Flex? Get thee to a bookstore: