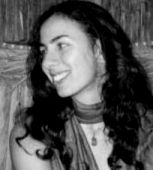 Amal El-Mohtar has appeared in Shimmer multiple times.  Her first story, The Crow’s Caw, appeared in the Summer 2006 issue.  In our Winter 2007 issue, she had Sparrow and Egg (where she was interviewed again), and most recently her tale The Fishbowl was published in our Clockwork Jungle Book (Issue #11).  Send her e-mail, or check out her poetry magazine, Goblin Fruit.

Questions About the Story

Where did the idea for “The Crow’s Caw” come from?
I used to live out in the countryside of Pontiac, Quebec, in this gorgeous place right by the Outaouais river. There was a lot of wildlife all around, especially in the spring and fall when the geese were migrating, but I’d never really paid attention to the crows – until this one morning when I woke up to the sound of them cawing. And it wasn’t that there were many, or more than usual – but it was just that, that morning, the quality of the sound shocked me. It was unlike anything I’d ever heard before, deep and raw and ragged, and so awing that I immediately wanted to write something for it. I wrote a poem, “Corbae,” which didn’t at all satisfy the urge – and then I wrote this story, which did.

How did the story change as you developed it?
I think it partly grew out of the poem, which consisted of the speaker asking the crow about its caw; I guess it went from there to being about three men who couldn’t be bothered to ask. Besides that, though, I was surprised by the way the three characters developed their own voices almost independently of me.

You know the advice “Sometimes you have to kill your darlings.” Was there a scene or line that it really hurt to cut, but cutting it made the story stronger?
With this story, nothing much changed! Once it got going, it seemed to be just what it ought to be, and the desire to tell the story right superseded any clever turn of phrase. I’m sure the crows think otherwise, but there it is.

How is this story like your other work?
I find I write a lot from a folkloric base, one that straddles many different traditions; I love myth and storytelling, and I find a lot of that gets worked into what I write. “The Crow’s Caw” is in keeping with that, I think. On the other hand, every story is its own thing, and this one has a darker edge to it than most of mine do.

How long had you been submitting before you made your first sale?
I actually dug this up… Almost two years, I think. A year and eight months, roughly, between my first submission and my first acceptance.

Do you work with a critique or writers group?
I do. Her name is Jessica Wick, and in addition to being an author in her own right and co-editor of Goblin Fruit, she’s my own personal writing valkyrie (some people have muses, but them’s the breaks). This story was actually written as part of an ongoing writing exercise we devised for each other, which consisted of writing a story for a random day of the week (determined by the cast of a 10-sided die… We made it work). We re-named each day of the week to give it a loose theme, and often wrote our stories with that theme in mind. “The Crow’s Caw” was written for Fatesday, and for her.

For this story, certainly, two standing influences are Charles de Lint and Neil Gaiman – two authors who, more than any others, made me begin to pay attention to crows and ravens, and helped me to realize that my obsession with myth and folklore didn’t have to be independent of my writing.

Favorite short story you’ve read recently?
“The Baby in the Night Deposit Box,” by Megan Whalen Turner, in the first Firebirds anthology. One of the best short stories ever, in fact!

Do you believe in ghosts or the supernatural? Why?
Yes – from experience. And because it’s so much more interesting this way. Also, for a good six months after I wrote this story, the crows deigned to tell me when I had received rejections. I’m not kidding.

I came across this quote, once, in one of those “Mysteries of the Unknown” books – you know the ones, big, black, find them at your local library and pretty much nowhere else – which said that what we call the supernatural is “not what is strange, only what is not yet commonplace,” or something to that effect. I think that’s true. But I would never want the strange to become wholly commonplace, of course.

Crows would give you rejections? What?
Here’s the thing. After I wrote this story, I became alot more aware of crows, in general. Now, they were all around me, understand. I lived out in the country. Not a day went by that I didn’t hear them cawing. But this one day, I was reading, oblivious to my surroundings, when I heard a caw that jolted me. I heard it again, and again — and I wondered, in fun, if it was heralding a rejection, since it had been a few weeks since I’d submitted “The Crow’s Caw” to a magazine. Still in fun, I got up to check my e-mail. Which I’d checked already earlier that morning. And there it was; a very kind and thoughtful rejection.

After that, I began to pay peculiar attention to the cawings. I wouldn’t listen for them, exactly, but whenever there was one that seemed like it was particularly addressed to me, I’d wonder, and I’d check my e-mail, and lo, there’d be a rejection. And not just for this particular story; after a while, they began heralding pretty much any rejection. I can honestly say that at least nine times out of ten, when I suspected them preparing me for rejection, I was right. This lasted for about six months or so; after that I got discouraged, and started wondering if I needed to petition some other bird to herald acceptances, and stopped submitting for a while. When I finally did get my first acceptance (a poetry sale to Star*Line), it was a complete and utter surprise, unprophesied, to the best of my knowledge, by any bird or beast.

Fast food: Yea or Nay?
NAY. Unless you’re on a road trip. Then, Yea by all means – as long as it’s anything but McDonald’s. Oh, and poutine doesn’t count as fast food, but as a cultural experience, so, always Yea to poutine.

Is there anything that you would “sell your soul” for?
Nah – I read way too much speculative fiction to be able to answer this question seriously and without fearing that the universe will somehow take me up on it.

Do you have a secret skill that you never get to show off?
I can recite “Betty Botter” at the closest human approximation to light speed – but no one ever asks me to, alas.

Quiz: How many writers does it take to change a lightbulb?
One writer and that writer’s sister — the latter being kind enough to allow her own lightbulb to be “borrowed” by the former indefinitely…