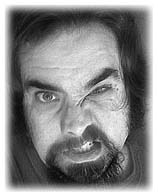 James “Liver Eatin’” Maxey hails from the wilderness of Appalachia and is greatly feared throughout the Union as notorious horse thief, cannibal, and literary critic. Sometimes in the delirium that follows gorging on human blood, Maxey is filled with prophetic visions of horrors even greater than himself. He babbles these dreams as he tosses and turns in feverish sleep in the dark of his cavernous lair. His trained bear, Ernesto, faithfully scribes his words and trades the resulting manuscripts in the town of Big Lick for jugs of rotgut whiskey. Several short stories and novels have seen the light of day as a result, including the recently released Dragonseed.

You can read James Maxey’s self-described “uninformed rants about politics, religion, and circus freaks” at Jamesmaxey.blogspot.com – but if you want news and information about his writing, you’ll have to go to Dragonprophet.blogspot.com. Or you could simply email him at Nobodynovelwriter@yahoo.com.