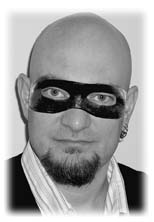 Lou’s story “And How His Audit Stands” appears in The Clockwork Jungle Book (Issue #11).  His website is  http://louanders.blogspot.com.

Did you ever want to write “just like” someone else? Who? Or was there any book that made you say “I can do better than this!”?

I’d love to be able to combine Robert Silverberg’s prose, Michael Moorcock’s range, China Mieville’s imagination, William Gibson’s impact, and Neil Gaiman’s success. That’s what I’d wish for if I ever opened a bottle with a genie in it.

As to an “I can do better than this.” Yes, it’s on my shelf, and I am allowed to take it down and throw it away when I finish my novel. No, I won’t tell you who it’s by.

Do you have favorite characters? Any characters, yours or others, are applicable.

John Carter of Mars. James Bond. Elric of Melnibone. The Gray Mouser. Morlock Ambrosius. Love to write something one day that I felt could stand among them and not be found wanting.

Well, I began Robert Anton Wilson’s The Illuminatus! as a religious person and ended it as an agnostic. I don’t think that’s what you meant by “disillusioned” but it certainly disabused me of some illusions.

How do you explain what writing is like? Is it something that you think about? Do you ever find yourself debating it with strangers?

If you could choose any five literary people — real or imagined, living or not, friends or otherwise — for a tea party… who would they be? A night on the town, karaoke, whatever suits.

Well, I’m the editorial director of Pyr books – so I better stick to my authors. First five to write me gets the invite.

How did writing a theme story work out? Is it more complicated than not having to adhere to a theme — or less?

I can only write to a deadline. I do think I stretched the theme a little, though, I must admit.

I had the usual college teachers try and dissuade me from writing genre.

The prop guys at Babylon 5 taught me how to pour and mold resin casts. I enjoy eating snake when it’s prepared right. I would have a movie deal if not for American Pie. When I ate beef I preferred it raw. I worked in the ebook space 10 years ago, before there was an ebook space.