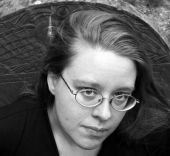 Monica M. Eiland’ss short story, Voices of the Gods, appears in the Autumn 2006 issue of Shimmer. Send her e-mail !

Questions About the Story

Where did the idea come from?
I found that just about every man I ever dated, no matter how much he might admire my talents, still wanted to clip my wings. But, then, giving up men seemed pretty harsh, too. Perhaps that’s a flip answer. Obviously, the situation is a bit more complicated, which I get at in my story.

How did the story change as you developed it?
I originally wrote the story at one sitting, in a narrative style, in which the main character was talking to her sister and asking for her help in doing the unsavory deed. Some friends loved this conceit, some hated it; some thought it had an unfinished feel. On the advice of Shimmer’s editor, Beth, I rewrote it as scenes rather than narrative, filling in the gaps with bits of Finnish culture, such as the names and some of the social customs. (My husband is a Finnish import.)

You know the advice “Sometimes you have to kill your darlings.” Was there a scene or line that it really hurt to cut, but cutting it made the story stronger?
This was an atypical story for me in that it was short and I added to it, more than doubling its size.

How is this story like your other work?
Most of my pieces are very different from each other on the surface. Nonetheless, not knowing me or my work, the editor of this magazine was able to figure out that two very different pieces were both mine. Who knows what she picked up? [Ed. Note: Maybe I should just let the world believe I am psychic – but the truth is, both stories used section headers in the same way – that’s all. They’re completely different stories! -bw]

Since I haven’t published much, this is almost a moot point, but I will say that much of my other work alternates between the present, the past, and the future. Though most of what I write is fantasy, I think of it as science fiction — technology so advanced, or biology so strange that it passes for the supernatural.

How long had you been submitting before you made your first sale?
I seriously thought I’d be able to publish my first novel by the time I was 13 — seemed like plenty of time! It’s been 20 years, and I believe this is the first piece of fiction I’ll have been paid for, although I’ve been runner-up on what seems like a lot of occasions, and I make my living as a writer, though not as a writer of fiction.

Do you work with a critique or writers group?
Not at present. The level of talent, seriousness, and dedication of the group makes a huge difference in the helpfulness of the experience.

What authors, if any, have had the most influence on your work?

Favorite short story you’ve read recently?
I used to adore Orson Scott Card — mostly due to Ender’s Game, which I read at the right age (13) — but I feel that he has lost the genuine empathy that he used to have for each and every character, even the bad ones. Considering that I do believe that evil exists in the world, I’m not sure why this bothers me so much — perhaps it’s the loss of moral ambiguity and the troubling “the hero is always right” viewpoint. Although in some of his writings, Card has a lot of valuable things to say about what makes for sympathetic characters and unabashedly entertaining fiction, I think the most useful lessons I’ve learned from him have been from characters and stories of his that I didn’t feel “worked.”

Madeline L’Engle, Ray Bradbury, Jane Yolen, Ursula Le Guin, and Octavia Butler have all stuck with me, though. I feel very sad that the world lost Butler so prematurely. These are the kind of writers I want to be. And yet… I notice that most of them are of a very different generation, and I wonder if they could have gotten their starts in the markets of today. (Maybe their successors are writing magazine ads or dry technical reports somewhere, who knows?)

Favorite short story you’ve read recently?
Truthfully, I read more novels than short fiction, though often I read children’s or young adult novels that are, effectively, the length of a short story or novellette. Lately I’ve been reading Tove Jansson, a Finnish writer of a much-loved (in the EU and Japan, anyway) set of children’s books about the Moomin family. She seems to be mostly unknown in North America but definitely worth a look. Tales from Moominvalley is a good start; Moominvalley in November is very trippy and best read later. All of her books are available online from booksellers such as Amazon (though you may have to use Amazon UK).

Do you believe in ghosts or the supernatural? Why?
I believe that all seemingly supernatural phenomena are real in the sense that they are manifestations of lingering psychological or physical remainders — dreams, memories, photos, recordings, and DNA are all ghosts of a sort. The human brain is designed to examine memories of the past in order to predict the future, and to study other human beings in order to read their thoughts and intentions. All are well within the limits of the natural laws we know but are no less incredible for all that.