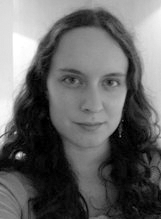 Alex Dally MacFarlane (www.alexdallymacfarlane.com) lives in London, where she is pursuing an academic life. When not researching, she writes stories, found in Clarkesworld Magazine, Strange Horizons, Beneath Ceaseless Skies, The Mammoth Book of Steampunk, and The Other Half of the Sky. She is the editor of Aliens: Recent Encounters (Prime Books).

Where did the idea come from? I wrote “Juniper Grave” in the autumn of 2006, at a time when I’d been reading stories based on fairy tales. So fairy tales were lurking around in the back of my head. Then I read a volume of Godchild (manga by Kaori Yuki) in which she used the Juniper Tree tale as the base for a short arc, and the tale clung limpet-like to my brain until, after a quick re-read of the tale, I started writing.

How did the story change as you developed it? The ending came as a surprise. I started the story as a retelling, but as I started writing scraps of scenes (I often don’t write short stories linearly; as scenes and sentences come to me, I put them on the screen/paper, and then go back to write the bits in-between), I realised that I wasn’t telling a story about the boy in the tale any more.

You know the advice “Sometimes you have to kill your darlings.” Was there a scene or line that it really hurt to cut, but cutting it made the story stronger? With flash fiction, I edit a lot as I write; by the time I’ve finished, it normally just needs a tidy-up. I don’t recall any severe clippings with this one.

How is this story like your other work? How is it different? It’s fantastical and it’s a bit strange. In those respects, it’s very similar to most of my work. But the fun thing about writing strange fiction is that each piece has its own flavour.

When did you know you wanted to be a writer? I made up stories with my dolls for years as a child. At about age 9 I got the idea that I’d like to try writing a story, but nothing came of it. When I got my hands on a Nintendo 64 at age 11, however, one of the games did something to my brain and I started writing. I realised very quickly that I wanted to do it for the rest of my life.

Who do you write for? I write for my own enjoyment, primarily, but I also hope that other people will enjoy my stories.

Favourite book read when you were a child? If any book stuck as a favourite through childhood and beyond, it has to be Fantastic Mr. Fox by Roald Dahl. I still adore it.

Favourite book you’ve read recently? Allow me to give two (though I feel I’m doing a disservice to many other great reads recently). The Dictionary of the Khazars by Milorad Pavic — a fiction constructed of fake encyclopedia entries about the Khazar people. I’m a big supporter of fiction told in non-conventional ways and this book is an excellent example of one possible form. The Course of the Heart by M. John Harrison — a novel about the slight encroachment/encouragement of the not-quite-real into our world, and the long-term effects this has on a group of friends. (I’ve also greatly enjoyed The Year of Our War by Steph Swainston, The Mount by Carol Emshwiller and Invisible Cities by Italo Calvino.)

If you have a day job, what is it? What do you like about it? I proof-read military specifications for Jane’s Information Group. Some of the random facts I learn are pretty cool. Like the fact that radars can identify types of helicopter by the radar-signature of their rotor blades. (Not everyone will find this cool, I guess.)