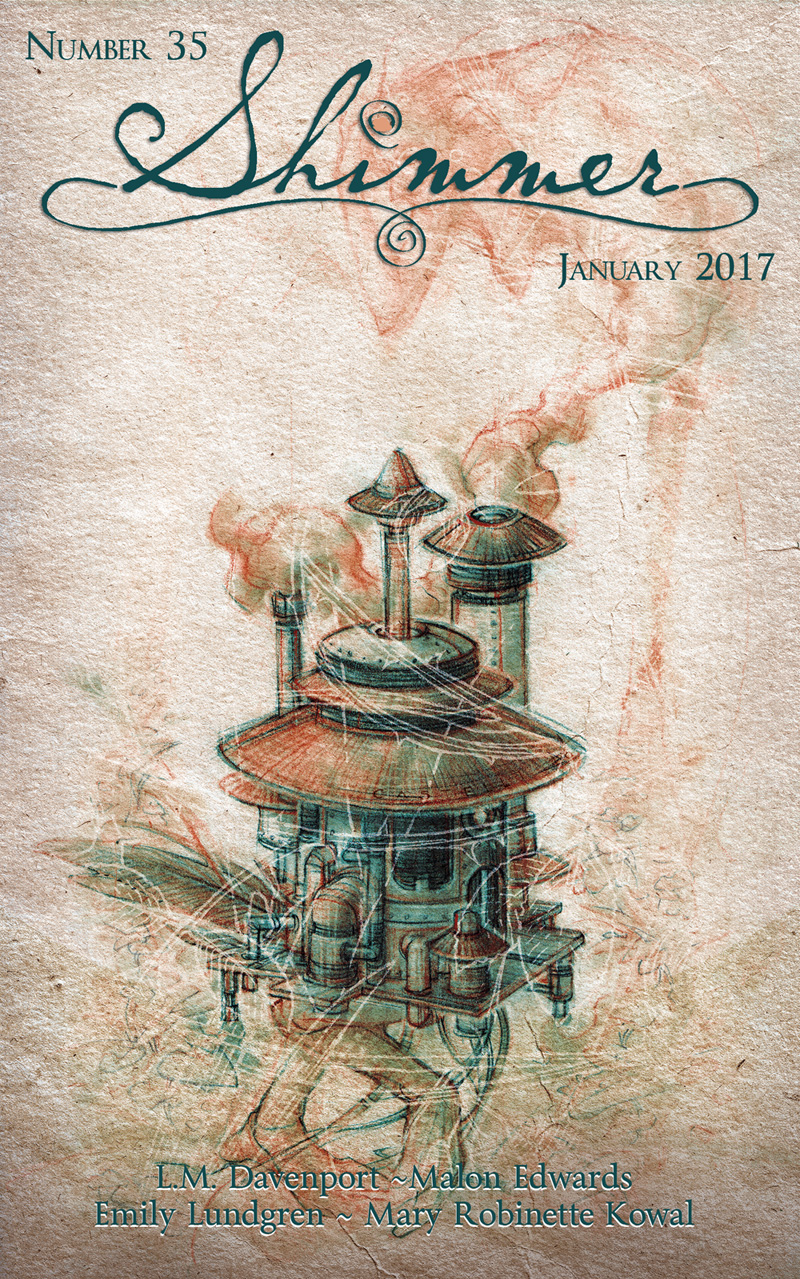 This issue of Shimmer contains stories that tell us evil may be overcome even if we’re small and unsure. Love can be a weapon and a shield. Keep fighting in whatever way you can.

We’re excited to share with you Malon Edwards’ sequel to “The Half Dark Promise.” We also welcome Mary Robinette Kowal to the pages of Shimmer for the first time since she was Shimmer‘s art director. Two new-to-Shimmer authors also join the party, with stories of exploration, revelation, and ultimately, love.

Hic Sunt Leones, by L.M. Davenport
It’s true that the house walks.  It’s also true that you can only find it if you don’t know about it.  Once, a boy in my high-school art class drew a picture of it, but didn’t know what he’d drawn; the thing in the center of his sketchpad had ungainly, menacing chicken legs caught mid-stride and a crazed thatch roof that hung askew over brooding windows.  I knew it was the house right away because his eyes had that sleepy, traumatized look that people get once they’ve seen the house.  I was used to seeing this look, mostly on my mother’s face. (2000 words)

Shadow Man, Sack Man, Half Dark, Half Light, by Malon Edwards
You keep running, even though you know you can’t escape the fifty-foot-tall Pogo. But you were built for this. You are taller than all of the girls and most of the boys in your Covey Four class. Your legs are longer. Your steam-clock heart is stronger. Your determination is unmatched. Even against the rocks they throw. Even against the insults they hurl. Even when they entimide you and chase you home after school every day, all because your mother could not save their friends.  (3400 words)

Trees Struck by Lightning Burning From the Inside Out, by Emily Lundgren
It is sweet and fitting to die with one’s pack under the full moon, but the sky is clouded by the city lights: orange and yellow and red like fire. Roque is running. Like a cracked whip, without sense. Under a sliver of jagged sound, under the leering fray of glossy towers, he smells a dog without a leash, the sharp of silvered bolts. He sees a woman with a cardboard sign reading something-something about the world, who catches his eye, whose own eyes widen, whose mouth opens and makes a howling noise: something-something about wolves! wolves! The road towards dawn outstretches before him, choking on cars and steam and fur and bone. Roque is running, running. His paws thump in tandem with the code of his heart, and he transforms. (5100 words)

Your Mama’s Adventures in Parenting, by Mary Robinette Kowal
Your mama adjusted her face mask and checked the chronometer on her eyepiece. Darn it. The filter would only be good for another fifteen minutes. She was nowhere near finished with the job. And this particular theft would fetch a good price on the energy market, what with the price of methane. She slid the siphon tube across to the capture valve and turned on the suction pump. If your mama could get most of the gas into the polysteel tank on her back… (1400 words) 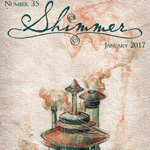