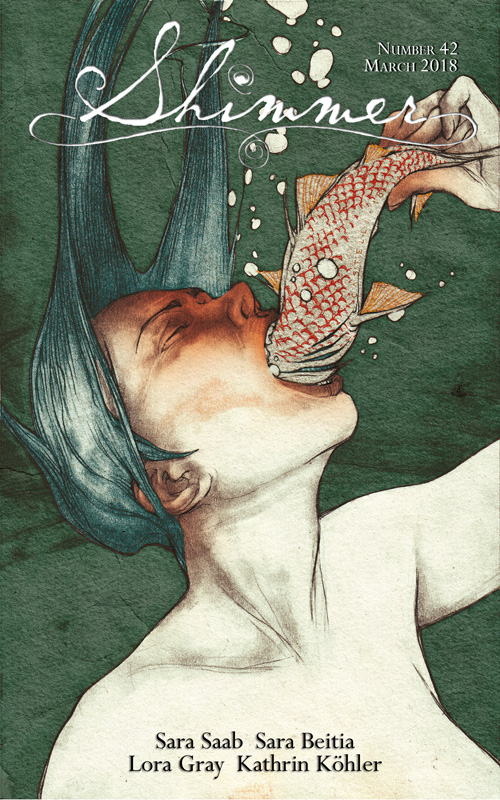 Issue #42 of Shimmer contains the answer
to life, the universe, and everything. Promise.

The Triumphant Ward of the Railroad and the Sea by Sara Saab
Almost everyone I entertain over a frosted fifth of vodka — bottle balanced precariously on a foldout tray, half my attention on keeping it upright — wants to know how I became a competitive eater. Also, how I found myself living on the Dbovotav Coastal Express. (5500 words)

They Have a Name For That by Sara Beitia
Mother insists everyone always said what an attractive quartet the family was, and there’s a stair wall lined with years of family portraits to bear this out. And now Cal and her groom will have children of their own, probably immediately, and they’ll be beautiful, of course, because Calliope won’t have it otherwise, and somehow that’ll settle it, because her life is a fairytale, so she can’t conceive otherwise. It’s not her fault. (6100 words)

The Imitation Sea by Lora Gray
You find the dead Angel at five a.m. in the slurry of broken bottles and rotting fish on the Lake Erie shore. It almost looks human in the morning light, a ten-year-old, maybe eleven, boyish, face bloated, limp and blue and doughy.  (3200 words)

If a bear… by Kathrin Köhler
You know in the same way that anyone who lives in an isolated village in a deep-shadowed wood knows anything: it’s been repeated so often you’ve choked on it since you were a child. One day a bear will show up at your doorstep. (1000 words) 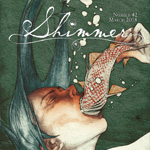