This issue contains two things I never believed Shimmer would publish: a devil story and a Hitler story.

When we read submissions, we see a lot of stories treading a lot of familiar ground. The retold fairy tale, the mermaid story, which is related to the selkie story; the story where Death is personified, the deal with the devil story, the story where someone travels back in time and kills Hitler.

It’s not that writers can’t tackle these types of stories, it’s only that they should do something new with the very old idea they are starting with. Our authors do that, and how.

Skills To Keep the Devil In His Place, by Lia Swope Mitchell – If you think about him, he’s got a way in. He’ll creep into your pupils, waft up your nose, croon through your earholes singing moody devil songs. From there, into your brain. I’ve seen it happen—it’s happened to me. And then everything you see starts to look like temptation. An object, something to use or destroy. Then you’re yelling at friends, telling lies, and stealing Mom’s credit card to buy $200 jeans off the internet and who even knows where all this ends.

Number One Personal Hitler, by Jeff Hemenway
Dr. Francis Waxmann invented time travel in the summer of 2075.  It broke the universe some sixty years earlier.

Spirit Tasting List for Ridley House, April 2016, by Alex Acks
Welcome, honored guest, to Ridley House; the acquisition of this charming 18th-century Palladian Revival villa has been something of a coup for our club and we are beyond pleased to present a wide array of tastes for your pleasure, if for a limited time. Take a moment to enjoy the grounds, particularly the stately elms with their attendant garlands of Spanish moss, and the mist rising from the ponds and nearby irrigation canals.

Now We’ve Lost, by Natalia Theodoridou
The war is over, we hear. We’ve lost. We look at each other in the dark. What does this mean? We’ve lost so much already. What is it we’ve lost now? 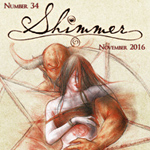