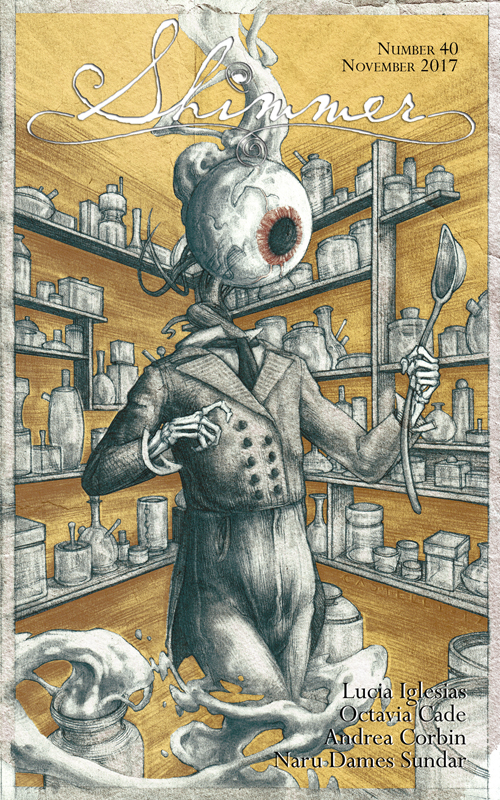 Forty issues! Forty issues of Shimmer! Forty! Shimmers! As with many of our stories, these four encompass love, loss, destruction, and the hope of renewal.  They explore new territories for their characters–the idea of new lives, of lives lost, of lives shed and begun again. Recipes for resurrection.

Boneset. by Lucia Iglesias
The blind Bonesetter’s townhouse enacts the architecture of a skull. Windows imitate eye sockets the Bonesetter has known. The front door comments on the vigor of the jaw, swinging up and down on mandibular hinges. When the hinges thirst for oil, the door munches up the lucklorn gutter-mice who skitter over the threshold, chewing them into flesh-jelly and spitting them across the foyer until the Bonesetter serves the hinges their oil from a crystal eyedropper.  (5300 words)

The Atomic Hallows and the Body of Science, by Octavia Cade
A spear breaks its blade upon ribs and punctures hearts. It shines with ice-coated needles in the salt air, over breakfast. “I’ve had a letter,” says Lise to her nephew. He’d come to visit for the holidays so she wouldn’t be alone in the cold country of her exile. “I’ve had a letter and I don’t know what to make of it.” She thinks she might be worried. (6200 words)

Raise-the-Dead Cobbler, by Andrea Corbin
The air was muggy, a heatwave burning through the spring, on the night that we met to conjure two people out of almost nothing at all. None of us could’ve done it without the others, and none of us would’ve dared, except Mason said please and I said maybe and Jun said we could, and so we did. You need a few materials first, then follow a sort of recipe. Call it Raise-the-Dead Cobbler. (6100 words)

The Weight of Sentience, by Naru Dames Sundar
The bullet fire drew a boundary between Masak and me and the rest of our brethren, laser tracers demarcating the distinction between safety and capture. While we curled up small and invisible underneath the leaking truck, those who were not so lucky were rounded up. Pushed into a small circle, their alloy limbs gleamed under the neon brightness of the cameras. The soldier wielding the wipe-wand moved from one kneeling body to the next, drowning my ears with its static hiss, the sound of memories dying. (5800 words) 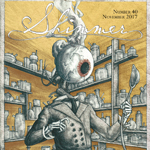