Blake’s story “The Jackdaw’s Wife” can be found in The Clockwork Jungle Book (Issue #11).  His website is at www.blakehutchins.com, and you can email him at hexabolic@gmail.com.

Did you ever want to write “just like” someone else?  Who?  Or was there any book that made you say “I can do better than this!”?

Man, there’s a lot of authors I’d love to write “just like.”  It’s virtually impossible to list everyone.  James Clavell always seemed to juggle multiple viewpoints seamlessly, and I loved his complex plots of intrigue amid colliding cultures.  I admired Roger Zelazny’s way of turning lush mythic images and themes inside out with what seemed to me a deceptively spare style.  Richard K. Morgan for grit and sentiment and razor-edged description.  Steven Saylor for his noirish portrayal of Republican Rome.  Jim Butcher for his sense of fun.  James Ellroy for relentless darkness.  Kate Elliott for her amazing sense of geography and detailed, character-based plots, Dan Abnett and Andy Lanning for awesome space opera action.  Garth Nix, Julian May, Warren Ellis, William Gibson, Madeleine L’Engle, Daniel Abraham, Octavia Butler, Katherine Kerr, Dan Simmons….  Yeah, I have a bloody long list.  And I’ve known fellow Wordo Jay Lake for a long time, and become a serious fan of his writing, so it’s a great pleasure to have a story in the same collection as one of his.

I’ve been reading Philip Reeve’s Larklight series to the kids, and I love his writing and sense of humor.  Same for Lemony Snicket’s A Series of Unfortunate Events, which has a fascinating voice deeply invested in breaking the fourth wall and talking directly to the reader.  As a great plus, I do all the voices and accents, so these two series are amazingly fun for me to read.

But I think it’s a trap if you actually try to write like someone else.  Voice is important, and you have to have room to develop my own.  I try to borrow techniques from my favorite authors and integrate them with my work.  It’s daunting, because I still feel as though I’m working to perfect the craft part of my writing, and that I have a way to go before I can start thinking of it in terms of art.

I don’t know that I’ve encountered any book that made me think “I can do better,” specially since I just finished my first novel.  Let me tell you, that was a humbling experience.  By the time I arrived at the end of the book, I figured I only had to write two or three more before I started to know what the hell I was doing.

Do you have favorite characters?  Any characters, yours or others, are applicable.

Marlowe from Chandler’s work.  In similar vein, I’ve really enjoyed the development of Jim Butcher’s Harry Dresden over the course of that series.  Julian May’s Aiken Drum has always been a favorite.  Guy Gavriel Kay has a woman minstrel in his novel A Song for Arbonne whom I liked a lot.  Turner in William Gibson’s Count Zero is a great example of a man trying to turn his back on a life of violence.  Augustus McCrae in Lonesome Dove.  Joss and Marit from Kate Elliott’s Spirit Gate series.

Of my own characters, I think my favorite is the synaesthetic orphan girl in my Writers of the Future story “The Sword from the Sea,” perhaps because writing from the point of view of someone with cross-wired senses was so much fun.

I have to admit I felt let down by the conclusion to Pullman’s brilliant Golden Compass trilogy.  I’m not certain exactly why, but I think Lyra felt tamed in the third book, and she was such a wonderful, passionate, wild spirit in the first two books that the final book felt more removed for me, more of an intellectual journey, less emotionally engaging.

James Ellroy’s White Jazz is well-written, but brutally depressing.  I mean, yeah, it’s Ellroy, but nobody in that novel comes out with any kind of redemptive quality.  Life is short, venal, blood-spattered, corrupt, and then you’re beaten to death in front of Howard Hughes. 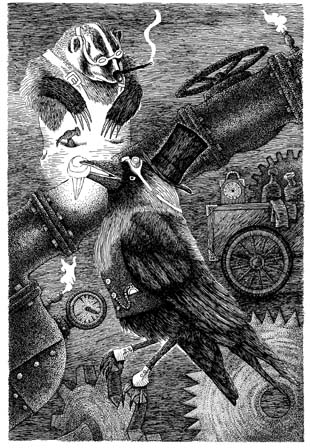 How do you explain what writing is like?  Is it something that you think about?  Do you ever find yourself debating it with strangers?

I think about writing all the time, mostly about how I’m going to make sufficient time for it amid the daily demands of being a father of two young children while retaining enough time to keep myself healthy.  Since I work as a freelance writer in the videogame industry, I think about it from a hustling up jobs standpoint as well.

For me, writing is a struggle.  Not so much the actual act, which I love, but the courtship and coming to consummation parts.  I feel easily distracted by life in general, and thus tend to come to the keyboard in manic efforts that span many hours or several days.  Writing a modest amount on a steady basis is not a habit I have been able to sustain.  Oddly, from a generating word count perspective, I’m capable of churning out a huge volume of decent to good material in a relatively short amount of time.  That’s not process, though.  That’s compensation, and it adds to my stress level in the long run.  What I’ve learned is that in this activity as in so many others, it’s more important to be the tortoise than the hare.  So of late I’ve been trying to channel my inner terrapin.  I have–seriously–about a hundred short stories on my hard drive that need rewrites or a final scene.  And then I need to send them out, which is whole other story for me.

I don’t debate writing with anyone, though I love to swap ideas and experiences and tips.  Every writer has to find his or her own way.  Perspective and advice is helpful, but the only absolute is that writing is like calculus.  You learn by doing, and by stretching yourself into material that challenges you.

If you could choose any five literary people — real or imagined, living or not, friends or otherwise — for a tea party… who would they be?  A night on the town, karaoke, whatever suits.

Hmm.  Mark Twain. the Gray Mouser, the Cat in the Hat, Pushkin, and Sherlock Holmes.  It would have to be karaoke.

How did writing a theme story work out?   Is it more complicated than not having to adhere to a theme — or less?

It worked out well for me, apparently.  I find creative constraints liberating.  I always seem to thrive on having a target to shoot for.  That said, in the case of the Clockwork Jungle issue, the story just popped into my head, practically done from conception, at least from the ten thousand foot level.  Set themes are an exercise the Wordos do with their holiday stories every Halloween and Christmas, so I find them far less complicated than an unfettered blank page.  It’s really fascinating to see what different authors produce around a particular theme.  On the one hand, you see tremendous diversity of creative vision, but then these parallel elements crop up on the damnedest places.

That I should concentrate on doing something “productive” as a career.  I spent a lot of time tail-chasing around professions I didn’t want to be in instead of writing.

Not really.  I have a feeling Badger would be quiet, and Jackdaw would be too distracted to focus on the–look!  Shiny!

I have other characters I wouldn’t let near an interview.

I was raised listening to musicals while other kids listened to rock and roll or jazz or classical.  So I sing.  I mean, I don’t sing well enough that people would want to hear me, nor yet so badly that they’d take icepicks to their eardrums.  I’ve never taken classes or participated in a choir, but I sing pretty much all the time when I’m doing chores, every day.  I don’t even know many songs; I mostly just make up stuff on the spot, ludicrous stuff about cat food or the Great Spaghetti Monster or how the sky is raining babies.  I sang to my daughters when they were babies, and I still sing to them.  And they sing too now, belting out their stuff all around the house.  Constantly.  It’s like being at ground zero in a perpetual girl circus version of Broadway.

Not that I know what I’m doing.  When I contributed a verse to a song at Jay Lake’s birthday a couple of years ago, I couldn’t figure out when to jump in on the guitar rhythm, like a kid trying in vain to suss out the playground jump rope pattern while the ropes are twirling.  Everyone was hugely amused.

Favorite books would be a huge list.  What comes up for me at this moment is Michael Chabon’s Summerland, Philip Reeve’s Larklight trilogy, Roger Zelazny’s Amber series, Tanith Lee’s Piratica, Guy Gavriel Kay’s A Song for Arbonne, and Richard K. Morgan’s Thirteen.  I love James Clavell’s Tai Pan, which has the distinction of having the final line on the final page of a thousand page gob-stopper of a book deliver the perfect conclusion, thematically and with immense power.

I’m not as much of a movie watcher, but I’d take Richard Lester’s “The Three Musketeers” and “The Four Musketeers” over pretty much anything else.

As I’m currently writing web comics for clients and working on my own, I’ve delved much more deeply into comics.  Lately my favorite print mag is Marvel’s Nova, which manages epic space opera with a very grounding human element.  Online, I’d recommend Lackadaisy at lackadaisycats.com, Lovecraft is Missing at lovecraftismissing.com, and Wonderella at nonadventures.com.  There’s some amazing work out there, as well as an incredible diversity of vision.