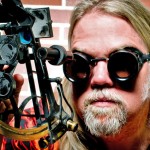 Jay’s story “Shedding Skin; Or How the World Came to Be” appears in The Clockwork Jungle Book (Issue #11), and you can hear him read it here! (12mb, mp3 format)  His tale “The Black Back-Lands” also appeared way back in Issue #2. Jay’s website is at www.jaylake.com, or you can email him at jlake@jlake.com.

If you could talk to any author from the past, who would it be?  Why?  Who would you NOT want to talk to?

I’d love to talk to either Mark Twain, or whoever wrote the Epic of Gilgamesh.  Twain because I’ve always been fascinated by his outlook on life, as well as his wit. Not to mention, he’s one of the greatest American writers ever. As for Gilgamesh, I want to know if Enkidu was a Neanderthal.  Though Jan Potocki would be an interesting choice, as well.

I’m not sure there’s anyone I’d not want to talk to, because even the irredeemably vile have things to say.

And would you use a character to speak to that author, or yourself?

Oh, hell, so long as we have magic time machines or resurrection-interrogators, I’m having the conversation.

If you got to borrow a character [or several], who would you choose?

I love Wolfe’s Severian the torturer, but damn he’s a difficult fellow.  Speaker to Animals, maybe, from Ringworld.  Or Brother Brutha from Pratchett’s Small Gods, who has one of the best realized character arcs in fiction.

Do your characters talk to you?  Do you see the stories as images?  Do you ever argue with characters you hadn’t planned?

Oh, did you want detail?  They don’t usually talk to me directly, but there have been exceptions.  Sometimes characters won’t do what I want them to, usually because I’m misinterpreting their nature in some fashion.  And I always see stories as images, without exception. Not movies in my head, not exactly, though the analogy has value.

Have you ever wished for a particular character — or idea — to walk into your story?  Has that happened?

I don’t think my writing works that way.  The ideas and characters are there when I need them.  If I wish for a particular character or idea, I write about them.

Do you ever get to a certain point, reading a story, and feel the click! as you have got to the point of no return/can’t stop now?  Does writing ever feel that way?  If you had to liken writing to anything, what would it be?

Yes, almost every single time. I write toward the click, then bring it home, whether it’s flash fiction or a 200,000 word novel.  Writing is like jumping off a high board and filling the pool on the way down.

What piece of writerly advice do you wish someone had given you?

More like, what piece of writerly advice do I wish I’d listened to earlier.  One of the best ever was Ray Vukcevich’s “Cut out all the parts that aren’t interesting.”  Took me years to begin to understand that.  But I remember going through all the larval stages of being a writer – “I’m an undiscovered genius”, “Publishing is a conspiracy of people who only publish their friends”, “Oh, crap, this is hard, I’ll never get anywhere”, etc.  If somehow, someone could have helped me step past those instead of through those, that would have been awesome.  Unfortunately, that’s a bit like wishing I could have stepped past adolescence instead of through it.

What kind of advice do you wish characters listened to?  Or offered?

If the little buggers would just do what they’re told, and let me know how the story comes out, we’d all be golden.

In this age of blogging and Twitter, I’m not sure there’s anything in my life that hasn’t been extensively discussed in public.  I don’t suppose anyone’s ever asked me my shoe size.

Howard Tayler’s Schlock Mercenary, for one.  Books of late, Robert Charles Wilson’s Julian Comstock.  In movies, reach back to Bliss, and Six String Samurai.  So much to choose from…