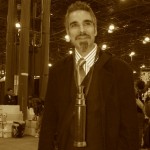 Where can you be found on the web?
Website: www.rajankhanna.com (and my wine and beer website is www.fermentedadventures.com)

If you could talk to any author from the past, who would it be?  Why?  Who would you NOT want to talk to?

Roger Zelazny is a writing hero of mine and so he’s an easy choice. His books like the Amber series and Lord of Light are still favorites. There are, of course, others – Shakespeare, Chaucer, many more – but I’ll go with Zelazny right now.
And would you use a character to speak to that author, or yourself?

Myself. I’m selfish that way.

If you got to borrow a character [or several], who would you choose?

There are so many great characters out there and it’s often fun to sometimes play with them. I’ve written stories that use characters from Dracula or from Sherlock Holmes mysteries or the Oz books and that’s been incredibly fun. I don’t know that I would feel comfortable tackling some of my favorites, though – like Moorcock’s vast stable of excellent characters or Corwin of Amber. If writing about any of them at all, I prefer to take a character that’s on the periphery, or not nearly so defined and try to do my take on that character instead.

Do your characters talk to you?  Do you see the stories as images?  Do you ever argue with characters you hadn’t planned?

The characters don’t really talk to me, though I often hear them talking and write down what I hear. I also see scenes from stories, but not all the time. It could be a character, a setting or even action – I try to capture as much of that internal moment as I can. And I don’t argue with characters too much, but sometimes they do resist what I want them to do. Sometimes they change their very natures in the middle of the writing process.

Have you ever wished for a particular character — or idea — to walk into your story?  Has that happened?

I don’t know that I’ve ever wished for a particular character or a specific idea to come into a story, but there are many times where I’m waiting for something. Where I know there’s an element missing, something that needs to take the story to another level, but I don’t know what it is and I have to wait for my subconscious to work it out. When I’m lucky, I eventually do – usually while I’m brushing my teeth or waiting for the subway to arrive.
Do you ever get to a certain point, reading a story, and feel the click! as you have got to the point of no return/can’t stop now?  Does writing ever feel that way?  If you had to liken writing to anything, what would it be?

All the time. I often read novels at night before bed and I’ve certainly had many occasions where I tell myself, “just one more chapter” again and again until suddenly it’s hours later. For short stories, I know a story has a certain something when I start it and barrel right through to the end. Writing does sometimes feel that way. There are times you hit this rhythm, when ideas are just flowering out of you and it’s like a straight, open road in front of you and it becomes easy to just floor it and take off.

As for comparing writing to other things, it can be like a lot of things. It’s work to be sure, but there are times when it’s like eating, or planting and growing a garden, or climbing a steep mountain, or herding recalcitrant goats. But it’s also like flying over the Grand Canyon, and looking up at a sky full of stars, and swimming in an ocean of strange and beautiful creatures. And more besides.

What piece of writerly advice do you wish someone had given you?

I read a lot of writerly advice when I was first starting out. And most of the important ones were there – the big rules, the fact that you can break them if you make it good, the reminder to focus on the story and not on what you do with it – but it took a long time for some of them to really sink in. So it’s not that I feel that I missed out on some advice, but I wish I had internalized the advice I received sooner.

What kind of advice do you wish characters listened to?  Or offered?

I try to listen to my characters rather than lecture to them. And I try not to argue with them, if possible. I guess I wish that they were a little more clear up front about who they are and what they want, but since that’s difficult for anyone to know, I can’t blame them.

I have a blog dedicated to wine and beer observations that is currently flying under the radar. And I also am a musician and a songwriter, though few people hear me play.

My favorites tend to be constantly changing, though there is some consistency.  For books, the aforementioned Amber Chronicles from Zelazny and Dune by Herbert. For movies, Apocalypse Now (and recent favorite, Up). In television, Deadwood, Six Feet Under and Lost. My all time favorite comic book is Grimjack.