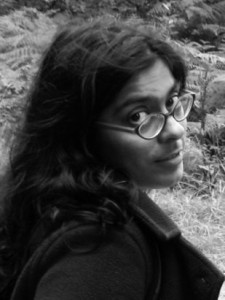 Shweta has been published in Shimmer twice: once for her story “The Mechanical Aviary of Emperor Jalal-ud-din Muhammad Akbar,” in The Clockwork Jungle Book (Issue #11) (click here to listen to her read it! 2mb MP3 file), and once for her tale “One for Sorrow” in Issue #10 (read her interview about the story!).  You can email her at shweta@shwetanarayan.org, or just visit her at her author website www.shwetanarayan.org.

Did you ever want to write “just like” someone else? Who? Or was there any book that made you say “I can do better than this!”?

I’ve wanted to write “just like” most of my favourite authors at one time or another. These days I remind myself that they can write like themselves just fine, and nobody else can write like me. (But I still want to write like Catherynne M Valente!)

Do you have favorite characters? Any characters, yours or others, are applicable.

At some point I realized that most of my favourites cheerfully sow chaos, whereas I was writing rather more introverted characters myself. The Artificer Bird in this volume is sort of my response to that, and as such she’s currently my favourite among my own characters.

Yes, sadly; often. Not so much by bad books or implausible characters; it’s books that are almost wonderful, or characters who I want to love, that get me. This seems to happen most often because of a cop-out of some sort. For example, a character I love makes a really bad decision – but then it just happens to all work out anyway, and they never have to deal with the consequences. Or a book takes on a truly messy topic with no easy answers, and then romanticizes away an aspect of the mess.

How do you explain what writing is like? Is it something that you think about? Do you ever find yourself debating it with strangers?

I don’t, really. I think it’s too subjective for debate or general comments. I sometimes talk about what it’s like for me; it’s like having a vivid daydream-like string of images and a voice that tells them, with me just trying to get the voice right.

If you could choose any five literary people — real or imagined, living or not, friends or otherwise — for a tea party… who would they be? A night on the town, karaoke, whatever suits.

A tea party, surely. And given that no group I picked would be exactly harmonious, I’d choose Mark Twain, Jane Austen, Ellen Kushner, Salman Rushdie, and Steve Brust’s narrator Paarfi. Then I’d make sure none of the knives were actually sharp enough to do damage, and videotape the result. And sell it.

How did writing a theme story work out? Is it more complicated than not having to adhere to a theme — or less?

I’m not sure how it’d be to have to stick to a theme. I followed this one because it was an inspiration, not a limitation. I happened to see the call for submissions not long after reading Catherynne Valente’s The Orphan’s Tales, the combination sparked a story-within-story in my brain, and poof.

The corollary is that if my story had wandered too badly off theme, I’d have shrugged and submitted it elsewhere. The theme was just one (yummy) ingredient in my story pot.

“A kid is a baby goat.” My English teacher wrote that in the margins of a story of mine when I was thirteen or so (this was at a British school). Mind you, I’d used the word “kid” in dialogue. In a young American character’s dialogue.

It was a pretty good lesson in using only the advice that rings true.

Is there something you do that no one ever asks you about? This can be anything — something unusual you eat, playing poker as a day job, a hobby, whatever you like.

I build mechanical children out of scraps and send them out to destroy cities.

Books: Far too many to name. Of those I’ve read this year, Nisi Shawl’s Filter House and Karen Joy Fowler’s Wit’s End are the absolute standouts.

Comics: Nearly too many to name. Ongoing webcomics, in decreasing order of steampunkishness: The Thrilling Adventures of Lovelace and Babbage by Syndey Padua, Girl Genius by Phil & Kaja Foglio, Gunnerkrigg Court by Tom Siddell, Family Man by Dylan Meconis, Skin Horse by Shaennon Garrity & Jeffrey Wells, xkcd by Randall Munroe, and Digger by Ursula Vernon. Print Comics: Persepolis by Marjane Satrapi, and (I am so addicted) Hikaru no Go by Yumi Hotta and Takeshi Obata.