Madu is a satchel who is in love with Eliza, who is a woman and who is also a princess. Sometimes Madu thinks of herself as a girl, and sometimes she thinks of himself as a boy, and at other times all she thinks is that she is just another thing that Eliza carries around with her. That’s okay because sometimes Eliza thinks of herself as a warrior princess who sometimes thinks she is a girl, and sometimes Eliza thinks she is neither of these things but a piece of flotsam on a swollen river, or a movable bank account beholden either to her parents or her job or the State.

I know it is confusing, but real life is seldom ever as simple as it is in fairy tales.

Eliza is 29, and she is standing by the banks of the old swollen river that runs through the city. She is smoking her last cigarette (although she doesn’t know this yet), with Madu at her side. It’s rainy season and the city on the other side of the river is shrouded by sweeps of grey, obscuring the house where she grew up, and the grave she came to tend. Eliza has come back to the city where she was born for the last time, and tomorrow she will return to the other, younger, noisier city at the far end of the continent.

“Do you remember when she gave you to me?” Eliza asks Madu, or perhaps the river, but neither of them answer. Madu remembers Eliza’s grandmother, though, even if she hasn’t got the voice to reply. Madu remembers hands as cracked and lined as old wood, warm and soft at the same time, testing her twine bindings and brushing her with restorative. A reassuring pat, and the croaking wood-fire voice, already laden with tobacco tar, telling Madu “Yes, you’ll do just fine” a moment before being handed over to the much softer hands of a younger Eliza.

“She’s yours now, my old satchel,” Eliza’s grandmother had said. “You can keep all of your new school books in it, and your packed lunches, and anything else. But you have to take care of it! Take care of it, and a bag like this will serve you a lifetime.”

If the girl-Eliza had mumbled a thank you, the satchel didn’t hear the words. Its gaze was still fixed on its previous owner back then.

“Hurry on now girl, I’ve put a little something at the bottom for you,” the tobacco-smoke words had said. It had taken Eliza her entire first, worrying day at Upper School to find the crinkle-wrapped candy sweets that Madu didn’t want to give up.

Back in the present, then: “Do you think it was bad, at the end?” Eliza asks the satchel or the world again, the sudden taste of nicotine grown stale and harsh in her mouth. Madu doesn’t know, but she is glad when she hears Eliza sigh, say “Bleurgh,” and spit out the stubby end of the cigarette, never to smoke again.

When Eliza stands, folding the picture of her grandmother into the old satchel, Madu handles it carefully and reverently, before storing it away with all the other treasures she carries.

“I will never serve you!” It was rainy season and Eliza stood on the grassy bank of the river, under the arches of the old cherry tree. She brandished a twig in one hand and swished at an imaginary foe.

Madu understood it was a rhetorical statement, and wisely said nothing. Eliza wasn’t the first human to talk to her; once the satchel had been quizzed by the King of Siam as to the whereabouts of his entire clowder of temple cats—to which questioning she had similarly remained silent.

“I’m going to be a princess, and I shall ride a dragon and free slaves and fight your evil kings!” the girl who was also a woman snarled.

Madu thought this was an excellent idea. She had met several such warrior princesses, and all without fail had told exceptionally good stories and thus made for very worthwhile friends. She rustled against the grass and produced from her infinite insides the brass compass that Amelia Earhart had once hidden inside, because Madu thought it was the bravest thing she had in her, and if you were going to fly dragons then you should probably know your course.

Eliza spent the rest of that afternoon dreaming of adventures and far-off lands. When the rain finally eased and Madu rustled that it was time for them to get home, Eliza threw inside her drawings of dragons and the satchel hungrily gobbled them up, storing them inside for a future rainy day.

Madu has eaten dragons and diamonds alike in her time, the golden treasure hoard of the King of Trolls, rose-water from Palmyra stoppered in crystal bottles, as well as the astronomical charts of Signor Giordano Bruno. She has eaten things that were not meant to be seen, like the pages torn out from Eliza’s diaries, one after another until all she could taste was ink and tears. Madu has also eaten things that were meant for some other time and place and someone else: the cocoons of silkworms left after they were smuggled out of China in 552, the alternative original lyrics to “Cross Road Blues” that explain exactly where in Mississippi your wishes can be granted.

The satchel never complained about the things that she ate through the centuries, each one after another until she was sure she would burst. But she never did burst a seam or lose a buckle. Her careful horsehair stitches always remained in perfect tension with the stiffened ochre leather. She lost a bit of the design and shine on the outside, of course—magic bags weren’t expected to last forever now, were they? But if you looked real close (and Eliza always did) she could still just about make out faded swirls and concentric scrawls, tiny flecks of the gold and lapis that could have been dyes or could have been the remnants of whatever astonishing hide she had once been made from.

Occasionally Madu would feel sick and nauseated in whatever physics-defying, quantumly unpredictable organ passed as her stomach these days. Especially when she had to swallow the handkerchief that Eliza had used to cry over Christian Jenkers, the blond-haired boy from Literature Class.

The tears made Madu’s stomach feel upset and irritable, and the satchel had wondered if she could swallow the odious little boy entire so he would never hurt either of them again. But then, of course, Christian Jenkers would live inside of her forever, a tick of hurt feelings and disagreeableness she couldn’t get rid of.

She settled for eating his spectacles when no one was looking in class.

Madu and Eliza went everywhere together—they were inseparable. Through her owner, the satchel got to explore the old city with its swollen river and cobblestone streets, its colorful markets hedging the slums and the iron-wrought gates around the sedate colonialist war memorial.

Madu was always an armory and an arsenal. She contained within her water, money, the gaggle of fantasy novels that Madu had with her always, makeup, string, a comb, a pack of pens and a shell from the beach they had once spent the summer hostelling by—all the useful and the semi-useful jetsam that a nearly adult girl might require. Later she carried other things like passports, mobile phones, a pack of cards with pictures of dangerous plants, sanitary products, and a personal assault alarm.

When Eliza was 24, and two years out of college, Madu ate the keys to her new apartment on the other side of the city, and wouldn’t give them back for two days.

Madu had been scared, at first, by the move. She had seen the way that everything in Eliza’s life had been carefully boxed and packed away, slowly folding into smaller and smaller spaces until the entirety of her had disappeared.

“You’re coming with me, stupid,” Eliza whispered reassurances to her satchel of holding.

During the quiet times that Eliza slept, the satchel dreamed. She thought about all the good and bad things that she had contained through the ages, and wondered what such a thing she was. How could she have admired her owner Perseus, the youth who had given her the still staring, bleeding head of Medusa, with its still squirming head of snakes?

A magic bag that could hold anything was a prize to any religion, whatever your pantheon. During her early years Madu had thought of herself as a cornucopia, overflowing with good things for all of humanity. But then she remembered Pandora, and wondered if she were not instead something much darker. Madu wondered if she was a blessing or a curse, and whether they could be the same thing at different angles.

In her own dreams, Madu rather pictured herself as a house, but with never-ending rooms. Behind some of the doors she held storms and the keepsakes thrown from lovers lost at sea; in others, she held buttons and thread. Madu didn’t know what kind of thing she was, nor where, if ever, she ended.

In her own dreams, Madu walked through the halls and rooms of herself, each balcony another treasure-trove, another stratum in the minutiae of her previous owners’ lives. There were whole geological epochs down here made of love and loss and longing and not-to-be-forgot. Madu wondered how many owners she had once had and how many she would have in the future. Would they all care for her, never losing her, just as Eliza had reverently looked after her? How many things would she keep within her?

In the very center of Madu there hung a magic-word mantra, as fresh and as radiant as the first day it was cast into her bindings:

Hold, Madu repeated, and gathered all of the things to her in a warm glow. 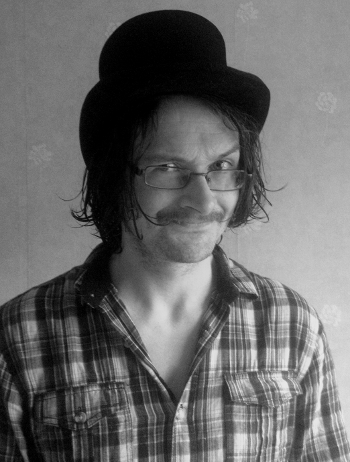 Ian O’Reilly is a freelance writer from the wildlands of the UK, endeavouring to add more robo-jetpacks, old gods, and general mischief to the world. He is the primary writer for fantasy boardgame The City of Kings, a proofreader for Ravendesk Studios, and his stories have previously appeared in Into the Ruins, Solarpunk Press, and Third Flatiron. He blogs, somewhat erratically, at troublesomewords.com.