These four stories, from Shimmer alums and novices alike, will take you on a journey that is familiar as earth, but as strange as stars. We explore the depths of the sea and the dry deserts both, where encounters don’t have to be alien to terrify.

Anna Saves Them All, by Seth Dickinson
The other team members have their own terrors, of course — rational big-idea fears: where Blackbird came from, why it’s here, what kind of Christopher Columbus apocalypse it could trigger if it goes home, or if it doesn’t. But Anna thinks about how she came so close to home, how she’ll never know if the thing she did was worth anything at all. That fills her with something jagged: anguish…or relief.

Dharmas, by Vajra Chandrasekera
Like every passenger he has ever driven, I have placed myself at serious risk of injury or death. He owes me a life, whether he takes mine or not. This is why I am compelled to undo his narrative.

Dream of the Fisherman’s Wife, by A. C. Wise
The fisherman’s wife rises. Is she sleeping still? If she glances back to the pool of moonlight holding her husband in their tangled sheets will she see herself lying beside him, chest moving steady with the in-out tide of breath? She steps outside, barefoot; from the pier to the sand, to the edge of the shore where the water traces a silver line against her toes.

We Take the Long View, by Erica Satifka
The Very-Big-Wrong, the it-thing from the landing site, has invaded the settlement, the place where the we-that-are-mobile gather to speak, to screw, and to eat of Leaves and body-food. We begged and pleaded at it and asked the Forest-That-Thinks to give us permission to use force to repel the intruder.

Editorial, by E. Catherine Tobler
Shimmer is old enough to drink…we’re concocting some delightful drinks over the course of Issue #21’s release! 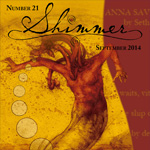