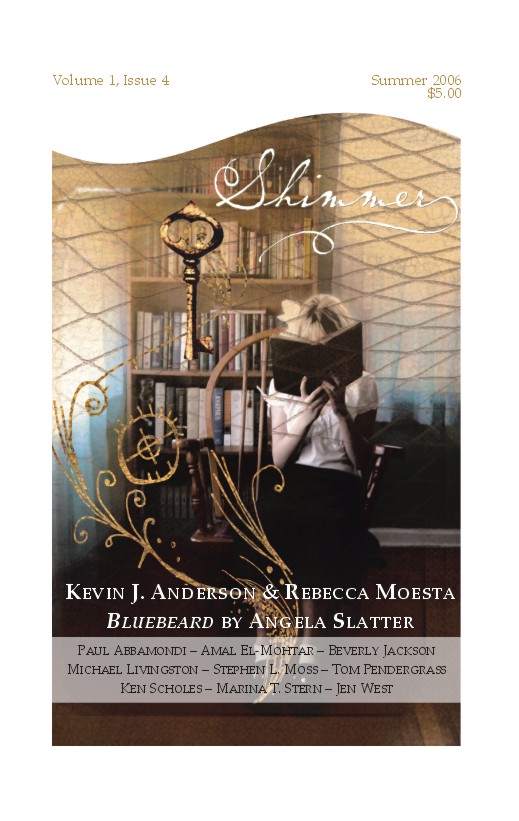 With a magical cover by Chrissy Ellsworth, Issue Four presents nine stories. We’ve got Amal El-Mohtar’s first fiction publication, Angela Slatter’s “Bluebeard,” (which received an Honorable Mention in the Year’s Best Fantasy and Horror), and seven other treats.Please click on any of the thumbnails below for a quick peek at a select choice of first pages.

Shimmer is the type of publication that you’re proud of reading in front of your peers. It is journal-sized, with an attractive, simple front and back cover layout. The interior has a clean, professional design. The font is eye-grabbing and large enough for most eyes to read without hassle…. Shimmer has some of the best dark fantasy and horror to be found in the small press. More people need to be exposed to this magazine. — Tangent Online

Ross Galeman sits on his roof and watches the rain. It crashes down on his neighbor’s lawn and sounds like a victory song from ages long past. With dazed eyes he follows each raindrop. He starts inside the shapeless grey cloud, then falls with each pebble-sized drop, plunging to the freshly-mown grass below. Though it’s well after two in the morning, he’s never been more focused.

Lucy and the Centaur, by Chrissy Ellsworth

I bagged my first gnome when I was nineteen. A late bloomer, I suppose, since my grandfather always said that he shot his first when he was just ten.

On the Edge of the World, by Marina T. Stern

From the shore, I can see the islands on the edge of the world. The distance between the shore and the islands is too great to swim, although they look near enough to touch. We have a saying in my village: Do not fly higher than you are willing to fall; do not sail farther than you are willing to swim. I know the saying, although I can neither fly nor sail. I was born without wings and without a boat.

The Urban Renewal Task Force completed on 11 June the site survey of the riverfront property in the Mayor’s “Strive to Revive” proposal. There is enormous potential of the site for the proposed luxury marina/condominium complex.

A Fish Tale by Beverly Jackson

My daily walk with my old dog and solitude is crowded by the hunkered rows of fishermen along the Mad River levee, come to chase steelheads they say are running now.