People often ask me, “what makes a story Shimmery,” and it’s not always easily answered — sometimes, you don’t know a story is Shimmery until you hit the end, and you realize there is a change inside you.

We’ll release a new story from Shimmer #23 every other Tuesday; or you can buy the full issue now!

The Half Dark Promise, by Malon Edwards
Something moves in the half dark two gas lamps ahead of me. I hold fast at the edge of a small circle of gaslight cast down from the street lamp above me.

Of Blood and Brine, by Megan E. O’Keefe
Child’s mistress was out when the scentless woman entered the shop and laid a strip of severed cloth upon the counter. For once, Child wished her mistress were at her side.

Monsters in Space, by Angela Ambroz
When I think oil rig, I think big metal Viking onslaught in the night. I think tower of the gods, fucking Valhalla, and a screeching guitar solo. My eyeballs of imagination are compelled to perceive beautifully inky black skies, inky black seas, inky black oil. It is, in short, inky black badassery.

Editorial, by E. Catherine Tobler
What makes a story Shimmery? …a confident voice that knows where it’s going from the first line, even if I, as a reader, don’t know. The immediate delivery of an image that is unusual, arresting; an image that makes you pause and want to see more. The stories in Shimmer #23 accomplish both things for me as editor and reader both. 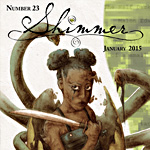