Growing up, two things weave their way in and out of our lives: loss and discovery. Sometimes, a loss can be a discovery, and sometimes a discovery is also a loss.

The stories in Shimmer #28 take you on four such journeys — journeys closer toward our more authentic selves, journeys away from what we thought we knew, and beyond what we know without a doubt.

Even In This Skin, by A.C. Wise
Mar has been binding her breasts for years by the time she starts visiting Jamie in prison. If the men stare, it’s at her ass; she can live with that. She isn’t packing today, so she doesn’t strut, just tugs her sweatshirt over her wrists before sliding into the seat opposite her brother. Today, she just wants to disappear.

In the Pines, by K.M. Carmien
“You stink like city,” the woods-thing says. The pines close around them, a green wall, filtering the light to dim and gray, cutting off the world. It looks like a girl, this one. Waxy pale skin, lank dark curls, shabby blue coat. Most of them don’t. They look like trees, or thickets, or wolves, or cats, or patterns of shadow. But this particular one, which always claims the right to deal with her, wears the skin of a girl who was murdered by a drifter four years ago.

To Sleep In the Dust of the Earth, by Kristi DeMeester
Lea and I met Beth when we were thirteen. That was the year Lea had legs that wouldn’t fill out her shorts. The year I started sneaking Marlboro Lights from my mother’s purse to share with Lea  in the back corner of Benjamin Harper’s abandoned lot.

A Drop of Ink, Preserved In Amber, by Marina J. Lostetter
Amber knew normal girls didn’t have drawers in their chests. Or in their stomachs, or backs, or thighs.  She knew her parents had had her specially designed by a geneticist in Pakistan, where the international genome-manipulation laws were more difficult to enforce than in the U.S. In the history of the world, there had never been another human like her. And she was human, even if she didn’t look it on an X-ray. 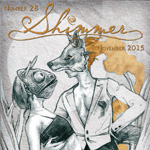