Dust rising over the next scrub-covered hill gave away the rider’s position even before the incoming trash-guzzler’s growl settled around Andy’s ears. She waited as patiently as you could on a jittery horse that didn’t know you well, in sun that’d singe any hint of bare skin.

They’d been waiting an hour. Time enough in the desert to dream up how many ways this data drop could go. Could be this rider had the data chip and she’d be drowning her sorrows at the tavern by sunset. Could be he was Directorship plant and there would be a gun for her.

Truth-running kept Andy moving, employed, and fed, but she wasn’t sure it was worth not seeing the near side of forty like Mama had. Mama had been a seamstress and died in the Crush of 2179, but Andy didn’t want to wait for death in a gloomy factory, only to meet it with a thousand others who hadn’t much wanted to go to work that day either. Twenty-two was too young to go at the barrel of the gun or in the heat of a chemical fire or in the wake of a radiation “leak” or on any other whim of the Directorship.

The four-wheeler roared down through the small gully and up her hill. The horse pranced back. Damn the Directorship goon that torched her last ride three months back outside Castillo Verde. Trash-burners were easier to kill than horses, but they didn’t spook.

The rider stopped and left the engine on idle. His broad, tan hands worked the helmet loose. His brown vest flapped open in the breeze, revealing his sidearm, black against his white shirt. Helmet off, she could see even at fifteen paces that he was one of the old ones, gray hair shining in the sun like brushed gunmetal. She hadn’t seen a rider with gray hair in years.

He started the code in a south Texas drawl. “‘Three things shine before the world and cannot be hidden.’”

“Mama liked it,” she said, tipping her Stetson. “You’re Daniel, then?”

He reached into his helmet. A few electronic bleeps sounded and a false panel opened.

“They’ve been after this one for a while,” he said, closing the distance and handing it up to her, face solemn. “Almost got nabbed for it in Goldfield.”

She nodded. That was deep Directorship territory anymore. She tucked the chip into the false flap of skin behind her ear and pressed the adhesive down. Dan rubbed the horse’s nose and whispered something calming in Spanish.

“You watched it?” she asked.

He looked into the horse’s brown eyes, not hers. “They’re right to be scared.”

“Good.” She wiped sweat from her brow then replaced her hat. “We’d both better get, before they sniff you out.”

“Fleet of foot and light of heart,” he said.

The truth-rider salutation only made her stomach turn. She touched her hat and turned the horse toward the next town.

Andy and the horse rode steady and stayed sharp. “Like rabbits on a forage,” Sonia would have said. Sonia’s voice had echoed Dan’s parting words to her, too.

Sonia, who taught her how to shoot. Who vouched for her to the other truth riders. Who spun the prettiest dreams about how many drops it’d take to retire alive and rich.

“We make it four or five years, I’d bet we can afford some place that doesn’t crack with every tremor. Six years: maybe it’s even green.”

“A green house?” Andy had asked.

“Don’t know if I need trees. I’d be happy enough without quakes.”

“Or dust that creeps into your unmentionables.”

This had made Andy laugh and squirm.

They’d talked about it over and over. In bed. On the road. In the data chips they managed to smuggle back and forth between drops.

Four years, Sonia had promised. Four years of living like quarry. Didn’t see many riders with many more years under their belt, she’d said. Four years.

Andy’d been riding for four years and six months. She figured she could get somewhere green enough by Sonia’s tastes after this drop.

What Sonia had never said was that most truth-riders didn’t retire after four or five years. Most didn’t live long enough to go gray like Dan. Sonia hadn’t even seen twenty-two. But her words had been rattling around so loud in Andy’s head for the past eighteen months that she wondered if they’d ever fade.

Ride steady and stay sharp, like a rabbit on the forage.

Stay fleet of foot and light of heart.

Pretty words, but some good they had done her.

Andy had ridden near a mile from the drop when she heard shots. The horse leapt into a gallop with no encouraging. Andy kept her eyes on the white-tailed kite soaring overhead and pretended she didn’t feel the tears.

Any other time Andy’d done a drop in a no-account town, she had ridden in slow. Strange enough to see a woman on a horse come off the desert roads, much less one moving fast.

But not now. Andy blew into town like the fire of hell was after her. A group of school kids raced at her horse’s heels until someone hollered at them. She pulled up sharp at the undertaker’s, and tossed the reins and a Lady Liberty to a boy standing agape on the porch.

“Be good to him,” she said, patting the animal’s sweaty hide. The boy nodded.

The hoary-haired undertaker looked up from a body when she walked in. His wrinkled hands shook as he crossed himself.

“They’re coming,” she said, holding the chip aloft. Sometimes it was all the code you needed.

He pried open a false panel in the floor and revealed stairs descending into darkness.

“Broadcast or wire?” she asked. You never knew what equipment these backwater settlements had managed to cobble together.

“Wire,” he said, his voice a choked whisper. “Reaches forty houses here and a relay station across the river.”

Andy smiled and clapped him on the shoulder and dashed down the stairs.

The space was made only for the equipment and its operator. The console’s buttons and dials glowed enough for her to navigate without additional light. Her hands shook sweat onto the con as she started the upload. The unit’s monitor replayed the video in a grainy black-and-white and with tinny sound from dust-filled speakers.

She watched the last senator die. Black-and-white Directorship soldiers gunned her down along with a crowd of peace marchers. They’d even killed the children she’d been standing with.

Hell. If they didn’t have their best trackers after this chip, then the Directorship didn’t know what they were doing.

Right about now a gloomy factory looked all right. But she’d never wanted that green-enough shack more. On a stream. With a barn for the horse.

At least Dan had gone down for something big. They’d gotten Sonia in her sleep between drops; she hadn’t had a thing on her.

The upload finished. Forty houses would see it. And it’d cross the river as far as their local relays stretched. And the undertaker would carry it somewhere—she couldn’t know, for the safety of the data—and if he got there and if the next truth-rider was alive, who knows how many more would know how far this Land of the Free had fallen.

Andy returned upstairs. She handed off the chip to the undertaker as she passed. It was his death sentence now.

In the tavern, Andy ordered a whole glass of the house’s best: the coolest, brightest water, tapped from the last aquifer in the West. She hadn’t had a drink that cool since…well, since she’d treated Sonia to a glass the last time they’d seen each other. Sonia had complained of the expense, but her face couldn’t hide her rapture.

Andy tried to feel that good about it, to let its freshness chase away her fears. She didn’t find peace in her glass. At best, she’d found that memory of Sonia’s smile. But that’d been worth letting the Kevlar-shirted barman con her the extra nickel for ice.

The room fell quiet behind her. Andy caught sight of tan Directorship fatigues in the mirror behind the bar. There were only three of them; Dan must have taken one with him.

Movement drew Andy’s eyes to the window. Outside, the horse ate a carrot and nuzzled the boy. The undertaker loaded up a trash-burner pickup with a new pine box, ready to ride with the truth and give the Directorship another few days’ trouble at least.

The barman coughed and blinked at her. In the mirror, she caught the specter of his sawed-off beneath the bar.

Maybe twenty-two years had been enough. But she was going to fight like it wasn’t.

She nodded and turned, pistol drawn. 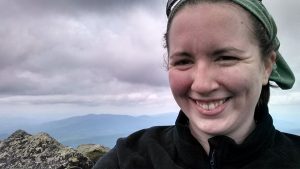 Victoria Sandbrook is a fantasy writer, freelance editor, and Viable Paradise XVIII graduate. Her work appears or is forthcoming in Swords & Steam Short Stories and Cast of Wonders. She is an avid hiker, sometimes knitter, long-form talker, and initiate baker. She often loiters around libraries, checking out anything from picture books to monographs. She spends most of her days attempting to wrangle a ferocious, destructive, jubilant tiny human. Victoria, her husband, and their daughter live in Brockton, Massachusetts. She reviews books and shares writerly nonsense at victoriasandbrook.com and on Twitter at @vsandbrook.

You Gotta Fight, For Your Right:

Feathers and Void, by Charles Payseur
There’s the explosion. The volley of missiles impact and my eyes widen even as my hands are ready to guide us in. We flock, the whole murder of us, as the Branthel 99X [JUPITER CLASS] Three Moons loses itself to the cold. The Distress blares as we approach, our sleek bodies the absence of light, wrapped in warmth and silence and life.

All the Colors You Thought Were Kings, by Arkady Martine
Moonrise glitters dull on the sides of the ship that’ll take you away. She’s down by the water, her belly kissing the sand and her skinny landing-legs stuck out like a crab. You and Tamar watched her land, stayed up half the night like babies staring at their first meteor storm, peeking over the railings of Tamar’s balcony and marveling at how the falling star-glimmer lit up the lights under your skins like an echo. You two have been full up with starstuff for as long as you’ve been old enough to go outside the crèche by yourselves. Now you’re almost home.

Define Symbiont, by Rich Larson
They are running the perimeter again, slipping in and out of cover, sun and shadow. Pilar knows the route by rote: crouch here, dash there, slow then quick. While they run, she ticks up and down the list of emergency overrides, because it has become a ritual to her over the course of the long nightmare, a rosary under her chafed-skinless fingertips. She speaks to her exo, curses at it, begs it to stop. The exo never responds. Maybe it is sulking, like Rocio in one of her moods.