Here’s what nobody told you yet: I loved both those girls.

The story as you probably heard it goes, once upon a time, a witch met your great-great-grands in the woods, blessed the good sister, cursed the bad. The sweet one went on to marry some jumped-up slick-faced city boy, while the sorry one lost herself in the woods and was probably eaten by a cougar.

That’s true as far as it goes, but the truer truth is that I intended neither boon nor bane. Since I split from my mother like a sprout from a seed, I had never laid eyes on another human ’til they came. When they did, the only words I said were words of love, declarations of devotion. How they twisted when they passed my lips, I couldn’t say.

The first sister came by my hollow on a fool’s errand, looking for water from a dried-up spring. I should’ve stayed hidden but when I saw her—petal-soft, virtue-bright—I filled like a cup with longing for something I never knew. I told her so.

Shaking like a spooked rabbit, she tried to talk. Instead she choked up garnets and emeralds, spat spring beauties and azaleas. Her quartz-cracked lips brushed, bleeding, against bearded iris the way I wished she’d brush against me.

She didn’t brush against me, not even as she scrambled towards the road heading to town. And I never got her name to call it after her.

A while later the next one showed up, champing at the bit for the same blessing. Alive with greed and cunning—for fame, for riches, for a better-looking fellow than her sister’s—but mostly just alive, a smile coiled in the corner of her mouth. I knew I should stay quiet but I burned like foxfire, cold-hot all at once at the look of her. My words this time laid eggs in her belly, slithered up her throat.

Last I saw of her, the blunt head of a kingsnake was slipping past the muscle of her mouth, making its way into the open air.

I loved them so much, they choked on it.

Believe it or not, I own a Bible. I know what the Good Book says. “In the beginning was the Word, and the Word was God.” But I learned that, god or not, the word infects. Say the words too hasty—”I like you,” “you’re beautiful,” “stay”—and the knowledge bleeds through the back of time, altering anything that came before. Like gunpowder in a mine, it detonates in the brain and body, a tingling at the base of the spine, the soft hairs of the arm raised up in surprise.

Love lays its eggs in the lover, too. Like a worm no thicker than a hair can crawl inside the brain of a cricket, take a creature made for jumping and singing and make him head for water and drown himself. Love takes hold of the mind and sets a new course, steering from a cabin of meat and hormones, locked in on the object of desire. I could no more stay away from those girls than an ant could leave the scent trail leading to its nest.

Is there anyone who can remain unchanged in the face of love?

After those girls left me, love turned inward, cancer-like, became hard, slick, spongy. I waited in the hollow like a seed in an airless cave, while love bubbled up, bloomed out, snaked through my guts, squatted in my throat.

My body betrayed me. The only use for my eyes was looking at theirs. The only use for my nose, smelling them. My fingers itched to touch their arms, their cheeks, their perfect thighs. Love tore at me until I fell apart, a clatter and mess of bits that didn’t match any more.

I don’t know how long it’s been. You’re the third to arrive—great-great-grand-niece-or-other of the two before—when you park your blue hatchback up the road and stalk through the undergrowth towards that spring. At dusk, you set up camp in the hollow, and I watch the neat bones of your wrists as you tie down the rainfly, read the murmur on your lips as you hum along with the battery-powered contraption you brought.

I do not come out.

Love presses words under my tongue, into the soft roof of my mouth. I wake with them tangled in my hair, pressed to my cheek like crystallized tears. I crouch like a waxcap mushroom, gilled with love, breathing clouds of spores, hoping for one of them to root down into the thin skin on the back of your hand, to come up spelling desire.

If I knew writing was safe, I might chance it. Drop verses through your day like maple keys. A sonnet folded like a flower peeping from under the edge of your tent. Haikus rain-slicked to your windshield.

But I learned the price of speaking long ago. 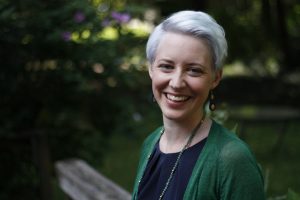 Kate Lechler’s work has appeared in Fireside Fiction, Podcastle, and Kaleidotrope, among other places. She teaches British literature at the University of Mississippi in Oxford, Miss., where she lives with her husband, a cat, a ghost-dog, and seven fish. When she’s not at school, you can find her sitting on a lawn chair in her carport, writing about genetically-engineered unicorns and dragons.

The Earth and Everything Under by K.M. Ferebee

In the Pines, by K.M. Carmien