A long time ago I was working with this computer programer, a guy I honestly didn’t like all that much. He was stiff and conservative and thought I was a hippie freak. One day we were stuck having lunch together and I tried to make conversation by asking what he liked about programming. Suddenly his face lit up, he looked rapt and engaging. He spoke of ideal computer code. It was compact, easy to understand and did exactly what it needed to do in as few lines as possible.

I hadn’t thought of it before, but we designers strive for elegance too. He and I found a little common ground that day. Recently a newer writer in my writing group asked how one should show setting to the reader. I think he was looking for an exact answer like, “Describe at least two things per scene. Use no more than four sentences, but no less than three words.” Of course the answer isn’t that static or simple. Each story needs different things.

The sky above the port was the color of television, tuned to a dead channel.

Sure, each writer will create setting in their own way, I might do it with simple direct language. Maybe you’ll do it ornately. As always, when you’re writing the first draft, just write. But when you’re rewriting that second draft, you should interrogate each detail. 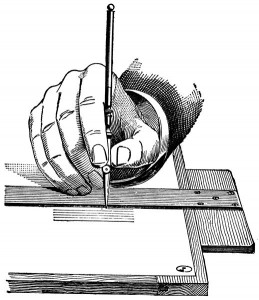 Does it add to the scene? No? Cut it. Does it contribute to the larger story? Is it clear? Is it interesting? What’s the right balance for that story? Do you have too many details? Not enough? Is your character in a blank room? Do you only have visual details, but no smells or sounds?

Newspaper comic creator Ernie Bushmiller, who did “Nancy” for decades, was famous for using just the right amount of detail. He would draw three rocks to show us there were “some rocks” in the background. Always three. Why? Because two rocks wouldn’t be “some rocks.” Two rocks would be a pair of rocks. Four rocks was unacceptable because it would indicate “some rocks” but it was one rock more than was necessary to convey the idea of “some rocks.”

Every summer Lin Kong returned to Goose Village to divorce his wife, Shuyu.

As you look over your writing, you might find elements to combine. Can something be visually presented and also give us an impression of smell? Or texture? It might be useful to go overboard in the first draft and write every detail. Then combine and compress them, see how few words you can use to describe your scene. If you go back and forth between adding and subtracting, you’ll eventually have the exact words that show setting, you might even slip in how the reader should feel about it. Boom! You have strong elegant description.

This process applies to dialog too. Readers mostly care about how the characters feel. They want to know how the characters are bouncing off of each other and how they each view the world. Add and subtract. Once you’ve communicated just what you need to say, it’s probably time to move on. Being elegant means always knowing when to stop. Too much dialog becomes mundane. Too little dialog and the reader might not feel the character. You have to cut out meaningless small talk, mundane things like ordering food or “Hi, how are you?” Replace it with things about the character and the story.

Beyond setting and dialog, elegance applies to all aspects of prose, including structure. How is your information presented? Is each detail coming at the exact time the reader needs it? How you parse out details is like the stones in a river, you don’t want them too close or too far away from each other. You need to build a path from the beginning to the end. That same interrogative technique applies to where you place information. Look at where you bring in detail and information. Have you described a room how a person just walking into it would see it? Is the reader learning things in an order that increases tension and interest? A well structured story is as compelling in structure as it is in content. The right number of words, the right words, showing up at the right time in the right order.