by Catherynne M. Valente (Feiwel and Friends, May 2011) 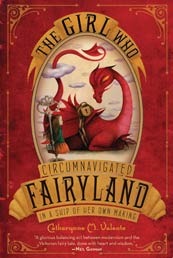 Mix all ingredients thoroughly and when bound into a smooth dough, lift and slice the shadow free. Any blood droplets should be kneaded back into the dough. Set to bake for one hour, until the house smells of vanilla and maple syrup. Serve warm with honey butter on the back of a penny farthing, shared with your very-red wyvern and your best blue boy.

Does every child dream of escaping their life and running into a land where the cities are made of bread or brocade? Does every child wish they might slip through a wardrobe or a window and discover a thousand new adventures? Surely most do–I did–and so does September, who, if one traced her family tree back, might be sister to Dorothy, Alice, and Persephone. Girls who longed for something different, and got it–in spades.

September doesn’t think she has much of an exciting life, living with her mother and washing teacups aplenty, so is thrilled to bits when the Green Wind arrives to carry her to Fairyland. Fairyland, however, has many more rules than September anticipated, and not every adventure is the lark she thinks it will be. When she accepts a quest from a trio of witches–retrieve their spoon–little does September realize what she has actually embarked upon.

In a bright orange dress and a green smoking jacket which knows how to appreciate its own lines, September sets out to cross Fairyland. She will encounter fabulous friends and terribly enemies, for this is the way of such stories. She will make sacrifices and receive gifts she never imagined. She will learn the worth of herself as well as her own opinions; when September sets out upon the ship in the book’s title, I cheered, for rarely does one find such a brave (and naked) heroine in YA lit.

September’s adventures will take her to lands that are eternally autumn, to the snow-locked north, to the horn of Fairyland where storms cling, and to the capital city itself. Pandemonium has some in common with Valente’s own Palimpsest, a city that is a character in its own right. Much of the landscape here comes to actual life; it only seems right that one finds beaches of gold and gems, migrating bicycles, and prisons of cold glass.

When I was a kid, graduating to chapter books was a bummer, because I knew I would miss the illustrations. But when I discovered that some of the best chapter books had illustrations before each chapter, my gloom fled. Charlotte’s Web, Little House on the Prairie, Alice’s Adventures in Wonderland. Every chapter would hold a special surprise, because one never knew what they would see. Even Harry Potter continues the tradition today. The Girl is no exception. Each chapter is illustrated by Ana Juan, and her style perfectly captures the wonder of Valente’s Fairyland.

I would have adored this book as a child. Lucky me, I can treasure it even more as an adult.