Sean Wallace, from Fantasy Magazine, Lightspeed Magazine, and a plethora of other fabulous projects (including twin girls), joins us this week on the Shimmer blog!

Every once in a while, we get an author who has gone over the line, and done something so horrible that they either get banned or receive a stern talking-to or are simply ignored. It happens very rarely, though, considering the hundreds of submissions received every month, maybe only representing less than one percent of the total slush. 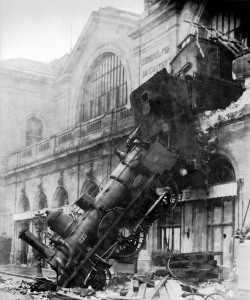 But I’m going to tackle five that boggle us here at Fantasy Magazine / Lightspeed Magazine, stuff that drives us bonkers and occasionally over the edge, and might have unintended consequences. (Editors talk!) So, here we go, with the five don’ts of submission blunders:

This represents the worst of them all:

Don’t brag, after we’ve rejected your story, that you immediately resold it to another market and then gleefully dance on our graves because we failed to acknowledge your God-given brilliance. I mean, WTF? It’s just downright tacky, unnecessary, and rather bugs the hell out of us, because it shows a level of unprofessionalism. We’re less likely to take a more studied look at your next submission. Oh, we’ll remember you, but for all the wrong reasons.

don’t argue with us, unless you want us to go Mamatas on your ass. (A pale-imitation of Mamatas, I grant you, but you still won’t like it!) I don’t care what it is, you shouldn’t be engaging with the editor on any level. And we won’t respond. You’re just wasting your time and energy, and you could be using those resources to write another story to later send in. That’s all we care about.

Which leads to the third don’t:

Don’t bother thanking the editor for the speedy rejection/reading your story/whatever. Just send another story more to our taste. We don’t have time to process emails, really. It’s just filling up the inbox, and usually gets automatically deleted every thirty days. We’ve got lives and families to attend to, and unwanted emails are going to get the (lack of) attention they so rightfully deserve.

don’t ask us to give you feedback. We’re not a writing workshop. We’re not a writing organization. We’re not your teachers. That’s what they’re there for. Use them! Magazines, on the other hand, are businesses, and in these days and times it’s not efficient for anyone to give detailed rejections, not without sacrificing response rates . . . and for us, responding quickly to your submissions is the greatest service we can do for you, which segues into

for the love of all that’s unholy please don’t attempt to question our submission return rates, or accuse us of running a scam, because we process your submission incredibly quick. The rates are what they are because of the time and energy the slush team puts in, and everyone works very hard so that it doesn’t pile up. (And it’s a pain in the ass when this happens!)  Usually a half-dozen times a year this crops up, where a disgruntled author bemoans that there’s no way that we could have processed their story in only a few days or even less. (I’ve been known to reject stories as they come in, which can be a few seconds after they drop into the system.) Most magazines have a slush reader, or even many. For the magazines I’ve worked with, we even have a dozen or more busy slushing, which makes for an even faster process. Every story gets its time under the sun; some stories get a quick glance, and some get a longer study, but every last story is looked at. There is no conspiracy, no scam. It is what it is.

So, if you can avoid these five major blunders you’ll be making a slush-reader or editor out there incredibly happy, and really, at the end of the day, isn’t that what you want?