Hi, folks. I’m Daryl Gregory, and I’m writing this during one of the busiest weeks I’ve had this year. I’ve got several comics scripts due, I’m writing material to support the launch of a new book, and the first chapters of a new novel are due in a few weeks. 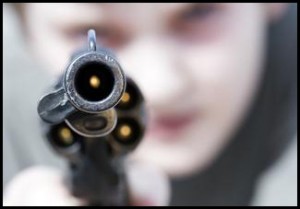 But that’s okay. That’s the point. Because the most important thing I’ve learned about writing as a career is this: Put yourself under the gun. Back yourself into a corner. Promise things you’re not sure you can deliver.

You see, I have self-discipline issues. If I don’t have a deadline, I goof off. I fritter. I start checking Twitter every ten seconds. And it was much worse when I was first starting out.

When you’re unpublished, no one is waiting for your next story, or your first novel. There is no ticking clock, except perhaps in the tapping feet of your spouse or partner as they wonder when the hell you’re going to finish something. It’s quite possible to wallow about like this for years. After all, life is busy. There’s your day job, and the kids, and that new series on HBO. And there’s the undeniable fact that if you don’t finish, you can’t truly fail.

I used to tell people, “Oh, if only I was locked up in a cell with a typewriter, I could finally get some writing done.” But because I was afraid of committing a felony (and afraid they’d never give me a typewriter), I had to give up on the prison fantasy. Instead, I started putting myself into situations in which I had to deliver, or suffer pain and humiliation.

Here are a few of the things that worked for me, and maybe they will for you, too:

But the most important thing I ever did was 24 years ago, when I told my fiancée that I wanted to be a writer. Amazingly, she believed me. And once she believed me, I realized I had to sit down and write, or I’d be a liar. While I’ve since lied about many things—“Feces? The other guys started it, honey!”—I’ve at least made good on the writing promise. For some reason she’s still married to me.

These days, I say yes to assignments that I don’t have ideas for, and agree to deadlines that are awfully tight.  And when I’m working on a story, I write at gunpoint, too. I deliberately put myself into jams on the page that I have to write my way out of. My outlines have gaping holes that must be filled with plot. Characters have to be invented when they walk into a room. Events and dialogue must be invented on the spot.

But this isn’t news, is it? It’s only an extension of what you do as a writer every time you sit down. The sentence doesn’t exist until you type it.  So get typing!

Daryl Gregory lives in State College, PA, where he writes programming code in the morning, fiction in the afternoon, and comics at night. Raising Stony Mayhall was published June 28, 2011 from Del Rey Spectra. His first novel, Pandemonium, won the Crawford award for best first fantasy and was a finalist for the World Fantasy award. His second novel, The Devil’s Alphabet, was named one of the best books of 2009 by Publishers Weekly. His first collection of short fiction, Unpossible and Other Stories, will be published by Fairwood Press in October, 2011. He writes the comics Dracula: The Company of Monsters (with Kurt Busiek), and Planet of the Apes for BOOM! Studios.

5 thoughts on “Writing at Gunpoint”