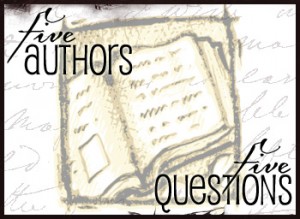 I like interviewing other writers, to find out how they do what I do: write! This idea came after too much coffee, I’m sure, but I thought what if I ask five authors the same five questions and see what kind of patterns emerge or don’t. Surely we can break the secret code to writing. For starters, I picked five random writers from my writing group.

My victims for these first rounds are: Luc Reid, Krista Hoeppner Leahy, Don Mead,  Justin Howe, and Vylar Kaftan. My thanks to them for taking part!

How do you begin a story? Does it start with the idea, a character, an image, a line of dialogue, or are all stories different?

LR: A story idea that grabs me usually has a character getting mixed up in something strange or difficult, and I write the story to find out more about that. For instance, my most recent story came from the idea of a stick figure who was in love with a cartoon–someone who was completely out of his league because the object of his affections was drawn so much better than he was. The world of the story emerged because it had to exist in order for that character to have that problem. For another example: my novel Family Skulls is about a teenager whose family can’t get help from anyone with anything, which doesn’t seem like such a bad curse until you break your leg at work, miss the bus back from a field trip an hour away from your house, or pass out on the street in winter. So: characters in strange and difficult situations. If the situation piques my interest and pushes my emotional buttons, I’m there.

KHL: Every story is different. Has a different inspiration, or spark. The challenge is how to kindle each spark into the best possible story. I like to sneak the theme in as early as possible, as that tends to lead to the most cohesive stories. I also find it helpful to think of the first paragraph as similar to a job interview. Lead with your strengths, and have the confidence that this particular story is the story that will change the reader’s life.

DM: I often start with dialogue—sometimes unattributed dialogue, which drives some people nuts though it’s worked for me quite well. I like to swing for the fences on the very first sentence. It’s not for everybody, but if I can get an editor to turn to the next page, I’ve broken through a barrier. I don’t want them to turn the page in mild interest or a sense of obligation, mind you. They have to want to know what happens next.

JH: All of the above which is another way of saying every story is different, which is also another way of saying by staring at my computer screen and mumbling to myself until something happens. Often the beginning, that arresting image, dialogue, nugget, or whatever you want to call it, will emerge only after a certain amount of drafting has occurred. It’s like that Steven Wright joke where he says he drinks at least three cups of coffee before his first cup of coffee every morning.

VK: All stories are different. Very generally speaking, the first line of a story should be a sentence that means one thing on first read, and something deeper or entirely new on second read (after the reader has finished the story). For example, an innocent-sounding line will take on a darker tone, or a play on words becomes clear.

How do you start a story? Leave us a comment. Next time, we’ll talk about story titles.