Ferrett Steinmetz’s “A Window, Clear as a Mirror” is this week’s featured story at PodCastle. The story first appeared in Shimmer 13. Congrats, Ferrett! 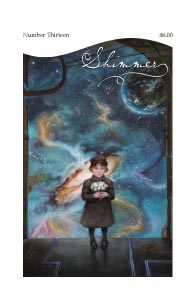 Readers, if you haven’t already lost yourself in this tale, seems like now is an ideal time.

Malcolm Gebrowski returned from his job at the stamp factory to discover his wife had left him for a magic portal. He stared numbly at the linoleum floor of his apartment’s walk-in kitchen, all scuffed up with hoofprints, the smell of lilacs gradually being overpowered by the mildewy stink of the paper plant next door. All that was left of eight years of marriage was a scribbled note on the back of the telephone bill.

He’d crumpled the note in his fist without thinking. He smoothed it out against the refrigerator to read Julianne’s last words again:

Malcolm,
Remember when I said you could sleep with Dakota Jewel if she ever dropped by? I sure hope so. ‘Cause if you had the once-in-a-lifetime opportunity to sleep with the most beautiful movie star in the world, I’d want you to take it. And remember when you said that if I ever found a magic portal, I could go?

Guess what? A magic portal opened.