That’s what we’re supposed to do, right? That’s what we’ve trained ourselves to do. It’s what we tell people when they come to us, saying “I’ve always wanted to be a writer” or “I can never get past a first chapter.” We tell them, “Just write. All you have to do is sit down and write.” Then, usually, they hem and haw and walk off, while we’re left thinking that they don’t really get it. 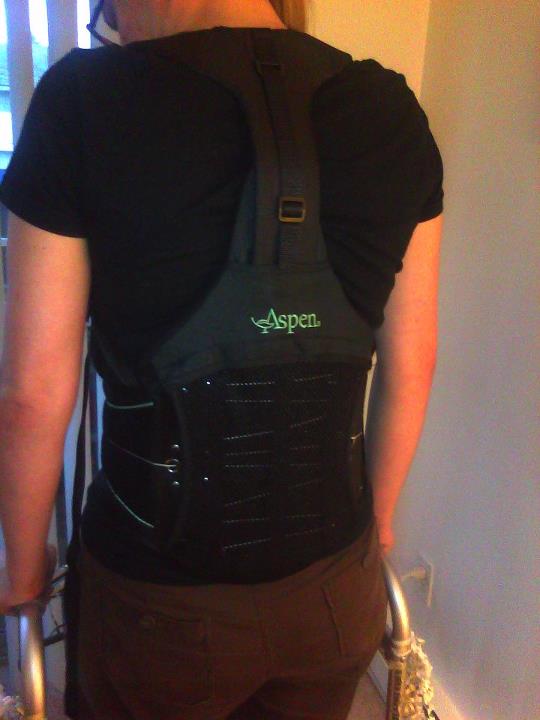 Or maybe that’s not you. But that’s me. I’ve always been good at getting a first draft out—locking that inner editor in a room and knocking out a word count. No problem. If I got stuck, I would either set that particular scene aside—and the answer would hit me later—or I would steamroll through it, no matter how awkward it felt, determined to fix it in the next draft. Sure, it would take more coaxing to get to revisions, but the first draft? That was cake.

Then, I broke my back. In four places. (I’m a “go big or go home” kinda girl.) Writing became harder. No, scratch that—writing became horrid. While the front of my brain was in story and setting and plot and plans, the back of my brain was constantly chanting mybackhurtsmybackhurtsmybackhurts. I’d take Advil and reposition myself and try to focus, but in every quiet second, between every thought, that chant came through. Like I’d left the radio on low and promptly misplaced it.

The pain affected my day job, too, since I also write for a living. I asked my boss to move me to something more technical (which ended up being editing) because simple writing tasks were taking three times longer than they should have. It’s not a big deal, I told myself. It’ll heal soon enough, and I’ll be back in the game.

That was in August 2011. It’s presently the tail end of June 2012, and this blog post is the first prose I have written in months. I had surgery in January (I’m now a cyborg, by the way), and kept waiting for the drive to come back. Or maybe just the inkling. Or, at the very least, to not feel dread and disdain at the very thought of actually making words happen.

I tried to deny that fear, because I wanted to be above it—and most of the time I could be. But every day, it would sneak in a little more. As I grew more afraid, I grew angrier. Angry for letting myself be afraid, angry at my situation, angry that I couldn’t even pick up my own fucking cane when I inevitably knocked it to the ground. (What was I, helpless? I’d been self-sufficient for a number of years—what was this “I can’t perform a simple task” crap?)

The toxic combination of fear and anger affected everything, including the relationship I was in at the time and my writing. Or rather, the way I thought about my writing. It was just another thing I couldn’t do, like standing up without wincing or emptying my own dishwasher. Another thing I was supposed to be able to do.

The simple act of writing this blog is a step for me, because I am writing. I am making words happen for the first time in months. The anger and the fear have drained away, and I’m left with the underlying confidence that I like to believe is at the core of my person.

“Just write” is simultaneously great and terrible advice. It’s fantastic when you know you’re just stalling (“no, really, just one more episode of Dr. Who, and then it’s straight to work”), but when you’re trying and failing and trying and failing, the surety of the words can convince you that you’re not a “real writer” anymore. Particularly when you’re the one doing the pushing. I wanted to want to write—I had this strange desire for a desire that is hard to describe or even really explain. I wanted to enjoy it again, not loathe it or fear it. I wanted to just push past it, but I really couldn’t.

What I did instead was something completely new to me. I’d bought a ukulele in February for fun, and about a month later, I surprised myself by writing a few songs—something I’d never really done before. Even though I still couldn’t write prose, it turned out I could write plenty of songs about the issues that weighed heaviest on my mind. It was sort of like setting a journal to music, and it was exactly what I needed to keep my head in the game. I think that’s what it takes—even when you’re so far away from your own writing: if you can stay connected to any kind of creativity, you have a pretty good chance of coming back around eventually to what you really mean to be doing—the way you really mean to be writing.

Everyone is different, of course, and my reactions to injury may not be yours. At the end of the day, though, whether or not you’re going to call yourself a writer has a lot to do with how willing you are to give it up. If you’re still fighting for your craft—even in ways you may not recognize as fighting—then you’re probably not out yet.

Turns out, it’ll take more than a broken back to stop me. What will it take for you?