Christie Yant penned the romantic post-apocalyptic “The Revelation of Morgan Stern,” which appears in Shimmer #16. 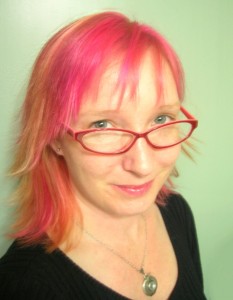 How did the story come to be?

Ah! I was hoping you would ask. This story was originally intended for only one set of eyes: it was a present for my then-boyfriend, now-husband, John. We met at a convention in 2009 and started dating long-distance a few months later. He lived in New Jersey, and I lived in California. We still spent more time together than we did apart, since we could both work from anywhere, but there were stretches of time when we had to stay on our own coasts, missing each other.

Anyway, at some point we were discussing the inevitable Zombie Apocalypse*, as one does, and it dawned on us that we needed a plan in case it happened while we were apart. So we looked at Google maps and established that Wichita, Kansas was almost exactly equidistant. We picked the landmark where we would meet, and I went so far as to plot my route. Because we are complete dorks.

John’s birthday was coming up–it was the first since we’d started seeing each other–and I had an idea. I got a cigar box from a local tobacconist, and started assembling a survival kit: waterproof matches, a compass, a space blanket, a multi-tool, a MagLite, etc. At AAA I picked up a road map, highlighted my route, and then left it outside for a few nights to weather it a little. I edited a picture of the landmark to look like a postcard, taped that to the inside of the lid of the box, and wrote “In Case of Apocalypse” on the top in red Sharpie.

I also left a small spiral notebook outside, which acquired that wonderful crispy, wavy texture that wet paper gets. I spent the weeks leading up to his birthday writing this story in it by hand, in different pens on different days.

I never intended to submit it anywhere–it was for him–but John encouraged me to. It’s actually really cool that it’s appearing specifically in Shimmer–my husband is an editor (it was intimidating writing a story as a gift for an editor!) and the Shimmer pirate issue was his first lead editorial gig.

*There are no zombies in this story.

You have attended Taos Toolbox, Launchpad, and possibly other writer workshops. What’s the most valuable thing you’ve learned from them?

I’ve learned different things at each. I got my new-writer mistakes mostly taken care of at the Santa Barbara Writers Conference; at Taos Toolbox I learned a lot about plotting and writing at novel lengths; Launch Pad is entirely about the science. I think a writer can’t go too far wrong with any workshop or conference because there is always more to learn. At Taos Toolbox, while much of what was taught was information I had come across before in other workshops or books, there was something about getting it all fed back to me at the same time that really made it all come together. I think Taos in particular really pushed me off the plateau I’d been on for a while.

Your website name and your Twitter handle, until quite recently, were “inkhaven.” Tell us what that word means to you.

“Inkhaven” was a hold-over from when I had more of a purpose to my blog. As a new writer, publishing seemed like a really cold and scary place where no one was ever allowed to make mistakes. Editors were terrifying, professional writers intimidating, agents practically a different species–I had a hard time getting answers to some of my own questions at first, and I wanted to talk about what I found out in a place where it was safe to just be new and not know everything, and I wanted other people to feel safe there too.

Unfortunately I’m a terrible blogger and my grand plans kind of went off the rails, but I maintain that I would like to be a safe person for people to just be new with and know that’s okay. I only recently changed my Twitter handle to my actual name because it was starting to get confusing–people I met at conventions couldn’t easily find me on Twitter, and I like to keep in touch!

If you could talk to any author from the past, who would it be and why?

I think you already know the answer to that because I know what your next question is.  The sad thing is that author actually is part of the past now, when it seemed like Ray Bradbury had surely earned the right to be immortal and share the present with us forever. Bradbury’s work was transcendent, accessible to everyone–he fit everywhere and nowhere. He painted pictures and evoked emotions like no other author I’ve read. And he was so encouraging to new writers! I got to meet him twice, and they are treasured memories.

What is your favorite Bradbury story or novel?

That’s so hard to answer! I think that probably the first two stories of his I encountered made the biggest impression on me, so I’ll call those my “favorite.” They were read to my fourth grade class by our teacher: “The Fog Horn,” and “All Summer in a Day.” I remember getting teary in class over that poor dinosaur, and just livid at those cruel children. I didn’t really know what science fiction was then, I only knew that these were the kind of stories I liked best–stories that had impossible things in them, and that made me feel something deeply.

I’m working on a novel now, a portal fantasy with other worlds and creepy monks and a small-time con artist who gets pulled into a tangle of magic and intrigue. And of course I’m writing short stories. I have a couple more coming out in the next few months, in Daily Science Fiction and Kaleidotrope.