A.C. Wise’s story in Shimmer #17 is “How Bunny Came to Be.” It’s a story of a person who finally comes to accept what they are, even if they have to do battle with a sea monster along the way. Here, A.C. gives us a peek into a cool show I’m pretty sure I’ll be watching soon! -ECT 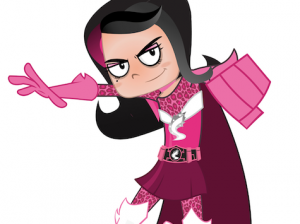 There’s a brilliant cartoon series on the Hub Network called SheZow. It’s not crisp, witty dialog, or tightly woven plots that make it brilliant. In fact, the first episode I watched featured plot that made little to no sense, even within a genre known for taking liberties with reality. It is brilliant because of the premise:  A twelve year old boy named Guy Hamdon discovers a ring belonging to his late aunt, and by putting it on he inherits her superpowers and transforms into the hero SheZow, complete with go-go boots, a pink, glittery skirt, and laser lipstick.

That’s right, there’s a kids’ show out there with a twelve year old boy fighting crime dressed as a girl. You know what the best part is? Everyone is okay with it. Guy’s best friend Maz becomes his sidekick, and life rolls right on. The world doesn’t end because a boy wears girl’s clothing. In fact, in a recent episode, Guy is asked in a dream sequence, “Dude, are you wearing a dress?” With barely a pause, Guy fires back, “Yeah, you got a problem with that?”

Of course One Million Moms is up in arms protesting the show and declaring the end of society as we know it. Personally, I want more shows like this on TV, more shows that not only flip and challenge traditional gender roles, but shows that tell boys and girls alike that being “girly” is okay. Liking pink, no matter what your sex or gender, does not make you weak. Wearing make-up and high heels, or flowery sun dresses, or layers of chiffon, or skin tight sequins doesn’t make you any less capable of fighting, or standing up for yourself and others.

While Kevlar and combat boots are more practical than stilettos and gold lame in real world combat situations, fiction doesn’t have to play by the rules. If Adam West’s Batman was able to repeatedly save Gotham City in heavy duty pantyhose while wearing his underwear on the outside, he should be just as capable of doing so in a sparkly ball gown. On the flipside, heroes like Superwoman, Jean Grey, and Storm, don’t actually get their powers from flashing their cleavage (despite what some artists would have you believe). They are strong and capable of kicking ass regardless of what they’re wearing.

Fiction should go beyond the surface of its characters, provide them with strengths and weaknesses that come from within, and those strengths and weaknesses should impact the plot. If a female character feels strong while wearing a chain mail bikini, more power to her. But if she’s wearing the chain mail bikini because of how awesome it looks on the book cover while contorting her spine in several impossible directions, and because her wearing it allows for loving descriptions of her breasts bouncing during battle scenes, then there’s a problem.

So give me men in short dresses and tall boots saving the world. Give me women in three-piece pinstripe suits battling monsters. Heck, give me a hermaphrodite in a full body fuzzy bunny costume taking down a room full of assassins. Just don’t give me blue is for boys, pink is for girls, men save the world and women stay at home. Don’t tell me there’s only one way to be strong, and that way is to purge any trace of anything the least bit “girly.” And this bit is especially true if I happen to be one of the impressionable young minds shows like SheZow are supposedly warping: Tell me I can save the world no matter what my sex or gender, and tell me you don’t give a crap what I’m wearing when I do.