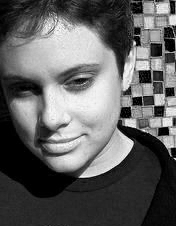 Sunny Moraine joins us in Shimmer #17 with a story that alarmed me the first moment I read it. I mean that in a good way, reader. I have never read anything like her story before. And may not again. Here, Sunny talks about the writing of it. -ECT

You can’t get to any of these truths by sitting in a field smiling beatifically, avoiding your anger and damage and grief. Your anger and damage and grief are the way to the truth. We don’t have much truth to express unless we have gone into those rooms and closets and woods and abysses that we were told not go in to. When we have gone in and looked around for a long while, just breathing and finally taking it in – then we will be able to speak in our own voice and to stay in the present moment. And that moment is home. – Anne Lamott

Many, many writers have influenced my writing, from the earliest days of wanting to tell stories via words on a page to the voice I often feel like I’m still struggling to find. But in terms of attitude toward writing, how I really think about the craft and what it requires, few people have been as influential for me as Anne Lamott.

Reading Lamott’s Bird by Bird was the first time I encountered an urge to go into the most uncomfortable places in myself in order to find material, to write about what one isn’t supposed to write about. There was something liberating about being told that so blatantly, though I’d never really believed otherwise – it’s different when you’re getting it from someone who isn’t you. But she doesn’t only claim that it’s important to do. She acknowledges that it’s painful and frightening, that the process of writing is often both, and that it’s okay to feel those things. That it doesn’t mean that you’re not doing well, but – on the contrary – that you’re doing what you need to do.

Stephen King, another writer who’s been a huge influence on how I go about the act of writing, has said many times that writing fiction is ultimately about telling the truth, and on this he and Lamott are in total agreement: the best fiction is the truth. But the truth hurts. The truth requires courage.

I’ve worked on a lot of things in my journey toward being a better writer, and all of them are things I’m still working on – technique, plotting, discipline, character creation, consistent world building, not overusing certain words (which seem to change with wild abandon as new ones move into and out of fashion in my brain). But I get the feeling that the most difficult and most important thing is that act of telling the truth. Like most people, I’m carrying around a lot of scar tissue, as well as wounds that are still pretty raw. There’s a lot of anger and pain and terror there. And I feel sure that when I can finally let that anger and pain and terror be present in my writing, I’ll be doing great work. But I don’t feel like I’m totally there yet. I’m not quite brave enough.

Which brings me to my story in Shimmer #17.

“Love in the Time of Vivisection” is a bloody, vicious story in a lot of ways, but it’s also tender and pained. It came out of thinking about honesty and how much it hurts, how it can actually be destructive, how it can destroy relationships just as easily as it can make them stronger. I was also thinking about how the most destructive kind of honesty is the kind that exists without any mutuality; it’s almost coercive, almost a violation. One person is stripped bare by someone else, submitting willingly but also left with little choice, and in the end they’re left with nothing at all. It doesn’t quite come out of my own experience – I’m happy to report that my own relationship is nowhere near as dysfunctional – but I can imagine myself there, and I know how hard it is for me to be honest.

In fact, if my own fear is at the heart of the story, it’s really more about the act of writing itself than it is about a relationship with a lover. It’s about the relationship between me and whoever is reading what I’m writing. I’m afraid to be stripped bare, but by the same token I think it might be necessary. And what happens then? What are we left with?

By the way, I realized that just as I was writing it. Huh.

So writing – good writing, true writing – is terrifying. It’s visceral. It can be ugly and beautiful in equal measure. And maybe, when it’s at its best, we as readers feel just as stripped as the writer, having read something so piercingly true that it’s as if the writer saw into us just as they were putting their own blood and bone and guts on display. Truth in fiction is mutual. It’s all done on faith, that we won’t actually be destroyed, that when it’s all over we’ll be left with something that’s fully ours.

Which means that if we’re really going to do this, we’ll all have to be brave before the end.