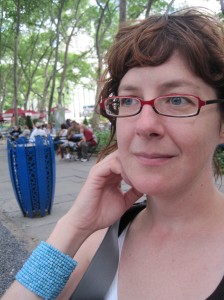 Rachel Marston blows things up in Shimmer #18 with “The Birth of the Atomic Age.”

Tell us how “The Birth of the Atomic Age” came about.

I was in a folklore narratives class and we were discussing urban legends and folktales.  I was living in Salt Lake City, where the conversations about Downwinders, those affected by fallout from nuclear testing in Nevada, is pretty prevalent. I realized that, though I was from Las Vegas, Nevada, I knew very little about the Test Site and the history of testing. I was also intrigued by the way comic books, particularly superhero stories, and B-movies had taken up the questions of radiation exposure. I began researching more about nuclear testing and reading eyewitness accounts. There were stories of people, particularly in Southern Utah, who had gone out to watch the tests.

My maternal grandfather had a winter wheat farm in Alton, Utah. He’d drive down every summer from Reno, Nevada to harvest the wheat. I decided to ask him if he’d ever seen any of the tests. When he told me he had, I pressed him for a little more information and he described the watching of the tests in such a nonchalant way, almost as if describing going on a picnic with your family. The story was born in many ways from that moment.

Tell us something about Minnesota. If we came to visit, where might you take us?

That is a hard question to answer in some ways since Minnesota is still so new to me. You would fly into Minneapolis, so I would definitely take you to the Mill Ruins Park on the Mississippi. Parts of former mills on the Mississippi have been excavated and revealed and another former mill has been turned into a museum discussing the history of milling in Minnesota.

Then we’d go to a deli, Rye, for delicious poutine (fries with cheese curds and gravy – trust me, it is delicious!). We would then drive about an hour and half northwest to St. Cloud, where I currently live, and then over to Collegeville to explore the arboretum and lakes on the campus where I teach. There are lakes everywhere in Minnesota (really!) and to be surrounded by so much water, especially living in the high desert my whole life, is pretty remarkable.

Kathryn Davis’s Duplex, a novel out from Graywolf Press. Davis deftly balances formal experimentation and story in an intriguing way. The book is also full of magic and other strangenesses, but constructed so that these things, while remarked upon in the book, are also accepted by the reader as very much part of the world.

What is currently in your cd player/iTunes/Spotify/8 Track?

I’ve been listening to a lot of Nick Drake lately, as well as The Organ.