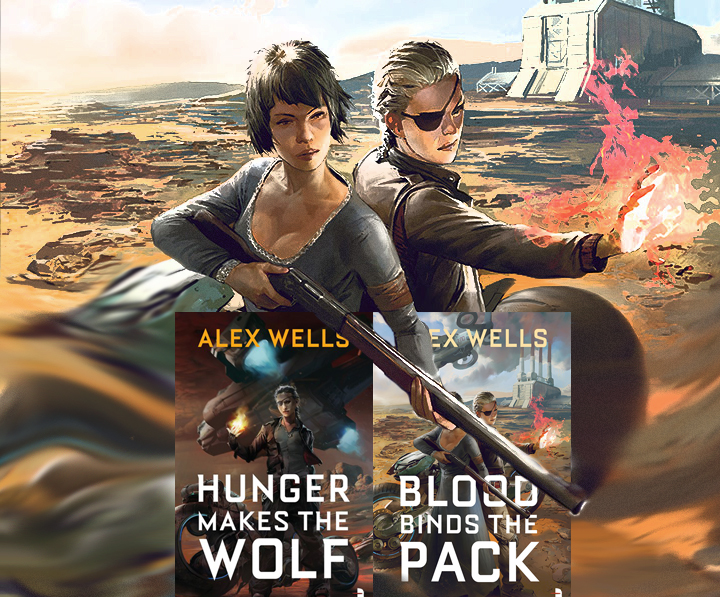 Last year around this time, we were getting psyched for Hunger Makes the Wolf, the debut novel from Alex Wells (whom you might know from Shimmer pages as Alex Acks). THIS year, we’re psyched for the sequel, Blood Binds the Pack, wherein everything is turned up to at least eleven.

Blood Binds the Pack is out today from Angry Robot (well today in the UK, in the US it’s February 8th!), and Alex was awesome enough to share some thoughts with us about writing, workers’ unions, and hey, video games! 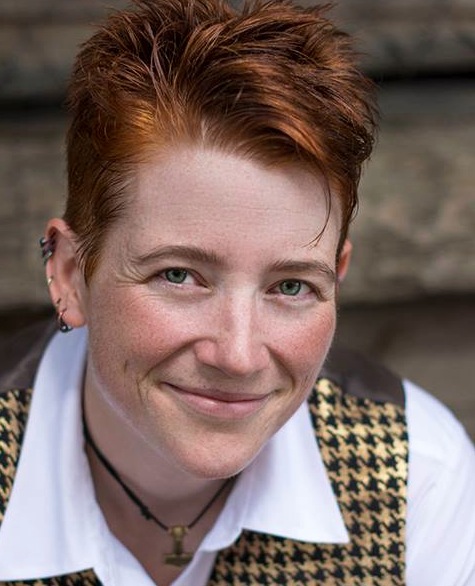 Writing a second book was actually very intimidating. I’ve written a lot of first books before. This is the first time I’ve ever written a second book—discounting the novella series I did, which feels like a different thing since it was supposed to sort of episodic anyway. I was afraid that I’d have lost the voice, for example, because I wrote most of Hunger Makes the Wolf over five years ago. I was worried that I wouldn’t be able to make the second book as cool or fun as the first book. I was so intimidated by this that I put off writing for way longer than I should have, and all that kicked me into gear was my agent gently but implacably reminding me that I needed to have this thing ready to turn in by a due date. (I do work better to due dates, though. There’s a point where I know I have to stop procrastinating, and I calculate it out fairly precisely.) Once I got over the psychological hump, actually writing the book was a lot easier than I expected. I got my outline done first so all of the major plot mechanics issues were already hammered out, so then I could just write, and I knew exactly what I needed to be writing when. I finished the rough draft in about three months, which is the fastest I’ve ever completed a book.

Blood Binds the Pack deals heavily with workers’ rights, with the idea that workers are people and are entitled to, gasp, certain protections in the course of their work. Where/when did your interest in labor politics begin?

It’s something that’s always been with me, though largely dormant until I hit my late twenties or early thirties. I grew up in a union household—my dad was the Chief Steward for the CWA local 7750 for a while—and we went through one strike while I was pretty young. Then I was actually part of the CWA while I worked for AT&T, right after high school. At the time, I didn’t appreciate it as much as I should have—it was later, once I’d been through several jobs and started really noticing shady labor practices (my favorite bit of subtle ick: the way everyone is discouraged from discussing how much they’re paid with coworkers), that I began to realize how much power workers had lost because most don’t have access to unions. That personal experience and Colorado’s local labor history (see: Ludlow Massacre) were really the foundation that all this grew on.

For readers who might be interested in learning more about such topics, can you point them to any good non-fiction reads?

Here, let me just give you the bibliography that will be at the back of Blood Binds the Pack:

Green, James. Death in the Haymarket: A Story of Chicago, the First Labor Movements and the Bombing that Divided Gilded Age America. Anchor, 2007.

Was there anything fascinating you discovered in the course of research, but it still didn’t fit into the book?

Pretty much every real detail of the Colorado Coal Field War isn’t included, since I used the history as inspiration but didn’t want to get too precious about it. Some of the stories that Mary Harris Jones tells in her biography will simultaneously make you laugh and curl your hair. I think the book that made the biggest impression on me was actually the one about Louis Tikas, though. Since there isn’t that much information about Tikas in the records, a lot of the book is a history that examines more the general lives of the Greek immigrant miners, and the way they went from outsiders to the backbone of labor resistance.

What was the most fun scene to write in Blood Binds the Pack?

Definitely the heist scene. I had a ridiculous amount of fun writing all the dialog for that, particularly Dambala’s. (Also, the chapters leading up to the heist when the plan is conceived.) I don’t want to get into more detail than that because it’s major spoiler territory, but the whole thing was so fun and easy to write! 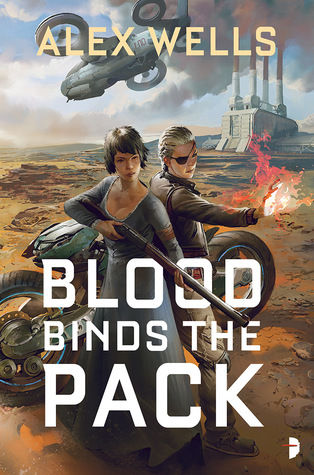 metaphorical and literal fire, and have these fires changed the way you approach and continue your work?

It’s hard as hell. The only reason I got Blood Binds the Pack done in good time was that I had a deadline, and flogging myself through deadlines is what got me through both undergrad and graduate school so I’m still in the habit. But the amount of time I’ve wasted angrily reading Twitter is downright shameful, and sometimes it’s hard to focus after all that. So I’ve had to just set times where I have to write, and set myself pretty stringent goals just to keep from getting distracted. I’ve noticed that everything I’ve written lately has been a lot angrier, though, even when I don’t want it to be. And it’s made me more determined to write about workers saving themselves, and rich people being shitty, and queer people being everywhere.

I hear you’re good at trivia; what’s one fun bit of trivia you learned while writing Blood Binds the Pack?

The current fastest helicopter in the world is the CH-47F Chinook, which looks like something out of an Avengers film, can fly 315 kilometers per hour.

I also happen to know that you enjoy a good game, be it tabletop or video. What’ve you played lately that you think your readers might dig?

Video game-wise, I’m still eternally stuck on Destiny, since that’s the game of my heart. Titan for life, basically. For tabletop, I’m now in two different D&D Fifth Edition campaigns, and this is a big deal for me… I’ve never actually liked D&D until this edition. And now suddenly, I can understand the rules! It’s glorious. It also doesn’t hurt that I have two great DMs that I play under. I’ve also loved playing Mysterium, which is by the same people who made Dixit, and you can play using Dixit cards if you want. It’s a semi-cooperative sort-of board game, where someone playing a “ghost” tries to communicate with you using very abstract cards. It’s easy to enjoy because it gets silly, and the cards are beautiful.

I’ve done some work for Six to Start’s Racelink, so hopefully those will be out in the world soon! And I just finished writing a scifi novel (not related to Hob’s world) so I think something fantasy is definitely next on my list. Oh, and I owe this really cool anthology about Battle Bards a short story…

HEY, that’s probably Sword & Sonnet, which readers should also check out. But first, go grab a copy of Blood Binds the Pack, and if you aren’t already on the Hob and Mag train to Wonderland, get Hunger Makes the Wolf while you’re at it! Alex, thanks for coming by, and thanks too for an AWESOME book!