It’s the time of year when badgers and people make lists!  Shopping lists, Naughty or Nice Lists and lists of books we loved.  The Border Keeper by Kerstin Hall was one of our favorite reads this year. It’s a story of journeys and secrets wrapped in gorgeous prose. Kerstin was kind enough to let us interview her earlier this month. If you haven’t devoured it already, add The Border Keeper to your holiday TBR list. –Suzan Palumbo 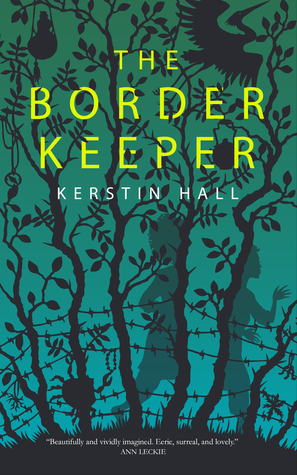 Your debut novella The Border Keeper was published by Tor earlier this year.  What has the experience been like for you?

Hectic! It’s been challenging and exciting and occasionally bewildering. You work on your writing for years without significant external pressure, publication is a nice-but-out-of-reach daydream, and then suddenly it isn’t. I somehow didn’t expect everything to become ‘real’ quite so quickly.

What was the original spark that put you on the path to writing The Border Keeper?

Travelling through the north-west of South Africa and southern Namibia — my mother grew up in Namibia, and I’ve spend a lot of hours driving those roads. The old train tracks running through the Ahri desert were specifically inspired by the railway line between Aus and Lüderitz, and the ghost town of Kolmanskop is echoed in the abandoned house where Vasethe breaks his leg.

The novella pays homage to the Greek myth of Orpheus while giving us an original take on the journey to the underworld story.  Have you always enjoyed mythology?  What myths in particular have been your favourites?

The Border Keeper was an attempt at worldbuilding outside of the European mode. When I started out, I definitely wasn’t writing with Orpheus in mind — I was actively trying to avoid the Greeks!

Therefore I completely undermined myself when I accidentally named my heroine after a Greek goddess. It should be pretty clear to anyone reading my work that I’m a proponent of throwing random syllables together to generate names. Googling my made-up nomenclature would have been a smart move, but by the time I realized the Eris was the Goddess of Strife, I was far too attached to her name. Besides it seemed appropriate, a bit like it was destined to be.

I’m definitely not an expert in mythology, but I have always liked hearing folk stories from around the world — bonus points if they are super creepy, feature take-no-shit women, or have a nice romance.

In many ways, the unravelling of secrets fuels the forward momentum of the book. Both The Border Keeper and Vasethe, the other major character, have parts of their pasts they’d like to leave hidden.  As a writer, do you like to know your characters thoroughly or do you let them keep secrets from you?

I’d like to believe that I’m the boss. I knew Eris and Vasethe’s Big Backstory Secrets from the start, which was necessary because those details shaped the narrative and their relationship in profound ways.

That being said, a lot of the less critical elements were invented as I went along. I remember that Eris’ friendship with Lfae wasn’t planned; that very much developed as I wrote it. And rewrote it. Making things up as you go has significant downsides.

If you were the ruler of your own demon realm in Mkalis what would it be like?  What would be its number one law?

Warm, because I’m not great with cold weather. I imagine it would look a lot like the Cedarberg: mountainous, dry, quiet, maybe containing leopards.

As for the rules? I’d like to think I wouldn’t immediately turn into a tyrant, but who knows. Probably “thou shalt not pirate my books” or “thou shalt not point out my plot holes in a public forum.”

One must not eat in Mkalis.  I personally would break that rule for cheesecake.  What food would you break it for?

You have a background in journalism.  How has this come into play in your fiction writing?

It encouraged me to avoid ambiguity on a prose level; I’m generally quite specific in my descriptions and details.

What books or stories have you loved this year?

Novels: Foundryside by Robert Jackson Bennett and The Raven Tower by Ann Leckie. I got to read an advance copy of The Unspoken Name by A. K. Larkwood, which was great!

There’s quite a lot in the works, most of which is either secret or in the very early stages. I am contracted to deliver two novels to Tor.com Publishing, the first of which I handed in a week ago. Star Eater is about ruthless cannibal women protecting their home from deathless monsters. It’s due for release in early 2021.

Thanks for chatting Kerstin!  We’re looking forward to reading Star Eater.  In the meantime, we hope readers will pick up a copy of the The Border Keeper.  Treat yourself!