The third book in Molly Tanzer’s Diabolist’s Library series landed this week! Molly was great enough to take the time to chat with us about the book, and writing, and secluded castles, because who doesn’t love a secluded castle? Grab your candle, your spell book, and get ready to fight some Nazis! 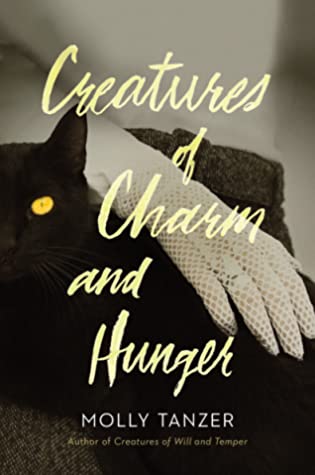 Creatures of Charm and Hunger is the third installment of The Diabolist’s Library, and takes us into the World War II era, where Bad People are doing Bad Things to further their Bad Causes. How did this book come to be?

I wanted to write a book about a teen witch fighting Nazis, so I did! Sort of. The Diabolist’s Library trilogy deals with demons and demon-summoners, which isn’t quite witchcraft. It’s more akin to a weird science. And of my two co-tagonists, Jane Blackwood and Miriam Cantor, Miriam (a German-Jewish refugee) ended up fighting the Nazis, and Jane ended up being a lot witchier.

The Diabolist books are something of a mash up; the first plays with the themes of The Picture of Dorian Gray, and the second muddles some Great Gatsby flavor into its brews. Did these works inspire your own, or did you chose the locations/times first and go from there?

The first one was definitely “inspired by.” I was reading Dorian Gray and the idea for it hit me like a sack of buckshot. With the second and third, I definitely thought about where I might like to set a sequel, since I knew I wouldn’t be continuing with the same characters or story!

If you were invited to, or in possession of, a secluded castle—and perhaps you are, who knows!—what kind of dark magics would you conduct there?

It depends on my mood, but likely I’d end up asking for some gardening help!

A lot of your work unpacks and updates typically Lovecraftian themes. If you could invite one eldritch horror to tea, which would it be? (Is it Toad?)

My cat, Toad, would probably just invite himself! I think if I was going to invite anyone over, it’d probably be Nyarlathotep. I think we’d have the most to talk about.

One wonderful thing about these Diabolist novels is your portrayal of women. As friends, as lovers, as people of ability and worth. We don’t see nearly enough of that. Is there a film or a book showing women this way that you consider a favorite or that has inspired you?

I’m reading Gideon the Ninth right now and it definitely has a lot of great lady relationships. In terms of a text that “inspired” me featuring such, I’ll say The Draughtsman’s Contract for sure. Content Warning: Everything with that one though.

You have worked as both a writer and an editor. Do you prefer one over the other? Do you find that the disciplines talk to one another, or are they isolated?

I really don’t love editing! It’s too stressful to reject people. I’m happy sticking to the writerly side.

I smile when I see your debut novel, Vermilion, on my shelf. The weather had looked as fine as cream gravy! Any chance you’ll return to that universe?

I don’t know. I so appreciate the love people have for Lou and for Vermilion, but it feels like going backwards! And I have a lot of new things I want to do.

If there’s one thing you want readers to know about (or take from) Creatures of Charm and Hunger, what would it be?

Be the teen witch killing Nazis you want to be in the world!

Tell us about one great thing you’ve read lately, be it a book or a blog or a fortune folded into a cookie.

George Orwell’s Homage to Catalonia! Wow, could he write.

Of late, it seems like more and more people are baking. What’s your favorite bread to bake?

That’s a hard one! Maybe challah, or anything I can braid or mess with. Or maybe this Tuscan coffee cake!

I’m currently working on a novelette, a novella, and a novel. And by working on them, I mean doomsurfing and watching movies for “research” and not getting much done. One day!

Molly, thanks so much for coming by. We loved the first two books and are stoked to read the third! Readers, you can support Molly and a favorite Colorado indie bookstore, The Tattered Cover, by ordering it there–or anywhere, really. You can find Molly on Patreon, the regular old web,  Instagram, and Twitter!