Issue #20 of Shimmer is a great reflection of the beautifully unexpected things we discover in our submissions, and the surprising things we end up loving as editors and readers both. Shimmer leans toward stories that cover new ground, and these four do that. They also feature authors making their Shimmer debuts — we love when that happens.

The Seaweed and the Wormhole, by Jenn Grunigen
Some days he hated sushi, other days it was all he’d eat. He was stubborn, he was subservient; he was abusive and he hated sex except for when he didn’t. His words were always unpredictable; the only thing you could expect from him was anything.

Ellie and Jim vs. Tony the Nose by Eden Robins
The afterlife resembles nothing so much as an old-fashioned automat. Just this long, narrow, possibly endless room. One wall is lined with shining chrome drawers and those tiny, cloudy windows where you can catch glimpses of sandwiches with wilted lettuce and sometimes more grotesque things, like gall bladders.

Allosaurus Burgers, by Sam J. Miller
Our teacher Mrs. Strunt said the allosaurus coming to Hudson Falls was the best thing that ever happened to Hudson Falls, but the worst thing that ever happened to the allosaurus. She herded us onto the bus looking mad about it, trying to keep us from seeing she was just as excited as we were.

Why I Hate Zombie Unicorns, by Laura Pearlman
The good news is, zombie unicorns almost never bite. The bad news is, even a tiny scratch from a zombie unicorn horn will turn you into a zombie. Mom discovered that by accident. 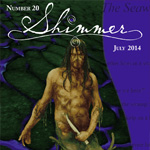