The future will be stranger than we can imagine, but so too was the past. Shimmer’s 22nd issue has four stories rooted in the here, the then, and the may-have-been, but the roots are never quite still, for they cross over and back and through. Whispers in welds, advertisements that don’t quite promise what you think they do; something moving within the very walls that enclose you; a scattering of falling, winter stars.

We’ll release a new story every other Tuesday; or you can buy the full issue now.

A Whisper in the Weld by Alix E. Harrow
Isa died in a sudden suffocation of boiling blood and iron cinder in her mouth; she returned to herself wearing a blue cotton dress stained with fresh tobacco. She was younger and leaner, as she’d been when she first met Leslie Bell. Her skin shone dark and warm without the black dust of the mill ground into it.

Caretaker by Carlie St. George
A ghost took care of you when you were young. She made you peanut butter sandwiches without speaking, shuffled silently from room to room in her threadbare bathrobe and bare feet. She didn’t have eyes, your mother. Or she did, but they didn’t work because she always stared right through you, even as she cupped your face with her cold, dead hands.

Cantor’s Dragon by Craig DeLancey
He beholds the dragon’s black head, its black shining scales, the smooth and sensitive circular membrane of each ear, vibrating behind a black eye. Cantor cannot discern the dragon’s tongue from the flames that churn in the cup of its jaw. Fire rattles in its throat, a sound like Rudolf’s failing lungs.

The One They Took Before by Kelly Sandoval
Kayla reads the listing twice, knowing the eager beating of her heart is ridiculous. One page back, someone claims they found a time machine. Someone else has apparently lost their kidneys. The Internet isn’t real. That’s what she likes about it. And if the post is real, the best thing she can do is pretend she never saw it.

Editorial, by E. Catherine Tobler
2014 has been rough, yeah? Let’s go out on a high note. 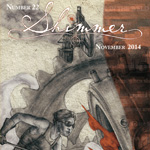