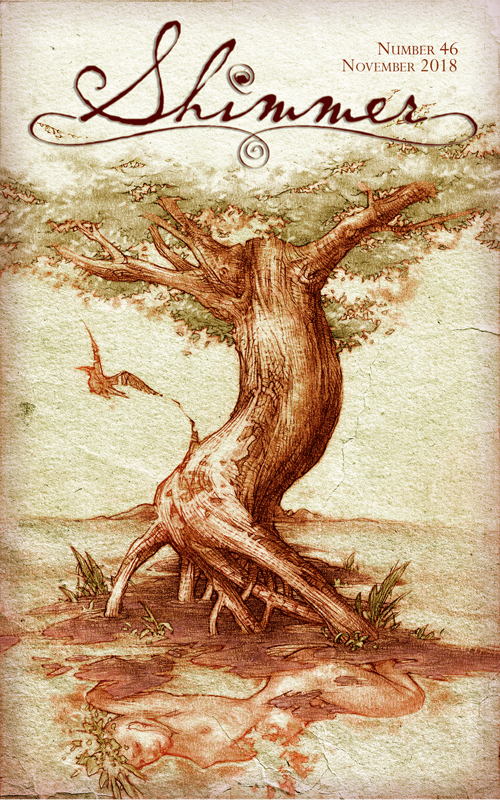 Come with us, into the woods, where we’ll meet a wolf, a witch, an orchard, a rocking chair, a roller derby, a strip mall, a hungry lake, fairies, cups of tea, a feather, a bit of thistledown, a ghost. The culmination of all your hopes and dreams.

Are you ready? Really ready? It’s the final Shimmer.

Rotkäppchen by Emily McCosh
The wolf arrives the same day Adeline buries Hugo on the edge of the woods, her boy’s grave forming a raft of upturned earth between two trees, just far enough from the fens that he won’t be drowning. She watches two young village men blanket him in icy soil. His shotgun leans against a nearby tree. His hunting knife is tucked under her shirt, against her back. Bone handle followed by colder steel. A second spine to hold her upright. (5600 words)

The Witch in the Woods Falls in Love For a Third Time, by Kate Lechler
The story as you probably heard it goes, once upon a time, a witch met your great-great-grands in the woods, blessed the good sister, cursed the bad. The sweet one went on to marry some jumped-up slick-faced city boy, while the sorry one lost herself in the woods and was probably eaten by a cougar. (850 words)

Streuobstwiese, by Steve Toase
Kate’s been out on the roof again. She’s drawn her finger through salt the color of wood ash, the sigils barely holding together on the terracotta slope of the tiles. The gutters are clogged with yellow fat, and dead hares whose eyes are gilded in gold leaf. Across the valley a field of barley whitens with mold and blight. (3100 words)

Lake Mouth, by Casey Hannan
My mother walks up dizzy from the pier with her mouth open and her arms out and dripping. The lizards on the boardwalk drop their blue tails to get out of her way.  (2100 words)

40 Facts About the Strip Mall at the Corner of Never and Was, by Alex Acks
A permanent shadow is burned into the cracked sidewalk outside the mattress store, tall and thin, with no head and too many fingers. (1400 words)

Antumbra, by Cory Skerry
As you enter the doors of this school for the last time, the girl who your brother slept with last night brightens for just a moment before she realizes you’re not Jesse. She deflates. (4000 words)

The Time Traveler’s Husband, by A. C. Wise
The time traveler’s husband leaves cups of tea throughout the too-empty apartment, waiting for his wife to come home. Sometimes – hours or days later – he finds the mugs drained, bearing the ghost imprint of lips, dregs staining the ceramic in dark, overlapping rings. Other times, the mugs are untouched, smelling of jasmine, bergamot, and orange pekoe gone cold. (4200 words)

Tyrannocora Regina, by Leonie Skye
Pursuit of her conjures a centripetal force that sculpts the seething ball of superheated wrongness inside my chest. Otherwise it would shatter my honeycombed ribs and blow a hole in the side of this cherry soda-smelling derby palace. (5900 words)

From the Void, by Sarah Gailey
The way I miss Esther is a slow-spreading bruise. It started in my belly, and every day, it spreads further across my solar plexus. If it had bloomed across my skin, I would sink my thumb into the center of it, press until the venous blue deepened into black. I would watch the color change with satisfaction, knowing that it would fade with time. (5000 words)

Thistledown Sky, by Stephen Case
The sky is crowded with ghosts. They pilot ships named after our rivers: Indus, Euphrates, Danube, Mississippi, Amazon, Tigris, Nile. My daughter’s is the Potomac, which she says is ironic and self-referential. It will be the eighth American ship, but only the third that has been piloted through our nation’s gate. (1900 words)

Ghosts of Bari, by Wren Wallis
Salvage is the only long-term game in the universe. No tyrant of the star-nets or titan of trade ever admired a salvage crew; we’re the crows on their trash-heaps, the rats in their walls. But I don’t think any of them’s ever considered, either, that when their names have long gone airless and their works are rust and shadow, it’s junkers who write their elegies. Every empire ever raised eventually falls. And sooner or later, the crows always come for the corpses. (4500 words)

The final issue of Shimmer is three issues in one! All the stories, editorials, interviews; no waiting. Only $4.99. 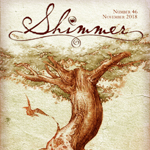