Come one, come all! Gather ‘round and let us tell you of a book; a book of wonder, a book that heals the lonely heart, a book written by our own head Badger. Do you hear that train whistle? Taste the tangy sweet memory of first love on your tongue? Get your ticket and sit next to me, Badger Suzan, as E. Catherine Tobler delights us with her collection The Grand Tour, out now from Apex Book Company!

What are your earliest memories about circuses? Did you ever go to one as a kid? How has the symbol/idea of the circus changed or remained the same for you over the years?

I went to one circus as a child, and I didn’t like it. It was too big and too loud, and ugh clowns. I don’t remember how old I was, but it wasn’t a good fit. It wasn’t until I discovered Ray Bradbury and his carnivals that I got more behind the idea of a bunch of really strange folks banding together and traveling about. HBO’s series Carnivale took that a step further (loved!)—but spoilers, I didn’t like American Horror Story: Freak Show. So I guess the idea of a circus/carnival does keep changing for me, but at the heart of it, it’s about family. 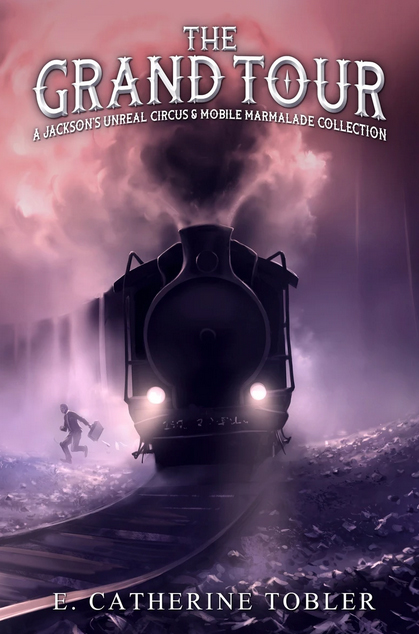 A train graces the cover of your gorgeous book. What’s magical about trains for you? Where or when would you go if I bought you a ticket to travel anywhere you’d like on a train?

Colorado has a train line that runs through the Rockies, all the way to San Francisco, and I would definitely take that, were the world not on absolute fire right now. Trains are romantic, aren’t they? I definitely fell in love with them through fiction, thanks Agatha Christie!

Which story in this collection was the most difficult to write and why? Were there any that flowed on to the page effortlessly?

The difficult story is “We, As One, Trailing Embers.” This was a challenge because the story involves conjoined twins, and I wanted a perspective that embraced the duality of that life, but also the singularity. One twin is a “monster” (whatever that means in this universe—we explore that at length!), the other tries not to be, and yet together they are something else, too. I am not sure if I succeeded—I hope I did. It allowed me to play with language a lot more than I usually do. I don’t find anything in writing effortless, any more; I think that’s the curse of learning too much. I kind of miss playing.

If you were part of Jackson’s Unreal Circus what would be your act? Which performer in Jackson’s circus would you swap talents with?

I don’t think I’d be a good part of the circus, though I am definitely broken and misfit enough to belong there. As the creator, I think I might be accorded a special act. Jackson needs a specific something—who else is he going to ask to make it? I think swapping talents with Beth would be fun—but as the creator, I suppose I already make and infuse the marmalade…

Beth’s mobile marmalade collection offers sweet treats that come with the chance relish one’s past.  What’s your favourite kind of marmalade? Tell us about a memory you have eating it.

I’m more of a jam girl. Strawberry is my favorite—and I didn’t get a lot of it as a kid, which maybe explains why I always try to have a jar of it now.

In your acknowledgements you mention your time writing online RPGs. Your first story in this collection was directly inspired by your experience there. Did you set out to create a set of shared world stories? Is this world complete or are there more tales to tell?

I set out to see if I could do something interesting with voice in a story, for a character. And only after “Vanishing Act” sold did I think that I could do more. I didn’t think it would sell, or sell as well as it did. That’s proof writers should never self-reject, ever. Send the story our, you never know. I don’t think this world will ever be complete, there’s a lot more to tell.

Jackson’s origin story is told in your novella The Kraken Sea. In this collection we glimpse Jackson  through the POVs of the people who work and travel with the circus. What draws these people to Jackson? Why is he more magical than your average ring master?

Are they drawn to him, or does he draw them to him? It’s hard to say. Everyone in the circus is broken, but that means Jackson is also broken. Sometimes coming to the circus heals the break, but sometimes it allows the break to shine more brightly. It’s a double-edged sword, the circus.

Will badgers ever join Jackson’s circus?

How do you know the circus doesn’t already contain badgers? That train has a compartment for everything.

The carnivals have been cancelled this year where I live. How have you been amusing yourself during this time of social distancing? Any suggestions for readers on how to keep busy until the circuses return?

I have been drafting a novel—which I do not recommend for everyone, but it turned out to be the perfect time for me to finish what I started uh, two years ago, gosh. And now it’s with readers, and it’s been a whole day, and there’s been no response, so clearly it’s awful and I have more work to do. My suggestion is to do what brings you comfort. We live in strange times. Be comforted.

No doubt it’s the search for an agent, if the book stacks up. And I’ve got a circus novella I need to write, and a science fiction short, and another book to draft, and Guilder to frame for it. I’m swamped!

Thank you, E. Catherine Tobler. Readers, grab yourself a copy of The Grand Tour. It’s a beautiful ride.