Write what you know…they all say it! Author Cassie Alexander stops by to tell us why writing what you know can be so awesome and can take your writing to the next level.

For me, the best stories are firing on three pistons – they’re good, interesting, and true. 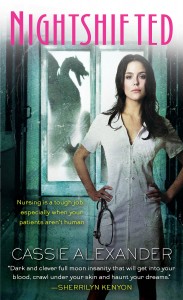 Goodness is a matter of storytelling skill. It has everything to do with pacing, voice, the rise and fall of action, and emotional resonance. Interestingness is all about novelty – new people, new places, new emotions. And truth is about being honest with your reader, and yourself.

The ability to tell a “good” story (for my limited criteria above) is acquired through time and patient practice, and is a longer, vastly different post. Same thing for emotional truth. But interestingness is something you can seek out and find. And what better place to do that than in your job or passionate hobby?

I never intended to write books about being a nurse while actually being a nurse. I went into nursing as a career to have a part time job I could afford to live on, while having enough free time to write. I assumed I’d be nursing at night, and writing science fiction during the day, and for a while that’s what I did.

Friends encouraged me to use the frankly absurd work stories I accrued in fiction, and for a year or two I said I couldn’t. Things were too weird, no one would believe me, and I didn’t know enough about nursing yet to write with any authority – I felt too new. All that ended the night I called a doctor to ask for more sedation on a patient who was crawling out of bed. The doctor clearly didn’t believe me, and left me hanging – I practically had to sit on this patient to stop him from extubating himself all night. I got off the phone too angry to breathe, and my first thought was, “That’s it. You’re going in a book.”

After that, I started writing Nightshifted – and that scene is pretty much the introduction to my book.

Now, Nightshifted isn’t completely truthful, in that it’s completely factually accurate in every way. I mean there are vampires in it for crying out loud. And honesty and the urge to not get sued compel me to note that there’s no one event or patient in Nightshifted that comes from any of my working life, etc. etc. etc. (Which you’d think would be evident from vampires, but you never know.)

However, being a nurse gave me the opportunity to sprinkle Nightshifted with moments that were interesting, loosely based on experiences I had, and with emotions that were true. And anything that you’re passionate about can provide you with those opportunities too.

You don’t have to have a job in your field, you can be an enthusiastic hobbyist or dedicated researcher. It just needs to be something that you’re into. If you’re writing something historical and researching it is a drag…why are you writing it? Ditch that project and find one you’re really interested about.

Everyone knows something interesting about something. Work with yourself until you find it – or with other people until you find theirs. (This is how I have survived many long trips with chatty people on planes.) And even if you look at your life and think it’s plain – consider how you would be under vastly different circumstances. You could be an accountant…dealing with ledgers on a colony ship. Or a teacher with a classroom full of aliens. Or a nurse – working on a floor with vampire exposed humans. You get the picture.

Every authentic experience you have as someone In the Know – be it in health care, law, cooking, parenting, teaching, quilting, bronco-busting, you name it, is an experience that you have had that other people might not have had before, that readers will want to share through you. There’s also probably a themed romance or mystery series in there for you to publish in, too.

The key to using that knowledge – to make readers excited to go on your same ride — is to filter it appropriately.

Have you ever read a text book? Or read somebody’s draft that read like a text book? There’s a temptation as an expert to overshare – after all, you really know what’s happening in a courtroom! Only…as most of us know from jury duty, the vast majority of that stuff is deadly dull. Same thing for the hospital. I get so excited to write accurate scenes sometimes. I’ll think, “And here is the one book in all of fictiondom that will teach everyone how to start an IV!” (Note to self: if you have ever sat and honestly wondered, “Why has no one ever written this before!?” think very, very hard. There is probably a reason.) Cue angels singing above at the genius of my completely new scene. I write it, content – because being overly accurate feels really good. Word count racks up. You don’t have to wonder what’s coming next, you know, because you’re dryly describing it, like an Ikea instruction manual. And then you reach the end of the page, and realize all your facts have done nothing for your plot and you have to delete it all.

Unless my imaginary patient has iron skin which makes an IV start impossible and which’ll be a plot point later, there’s no point to having it in there. Iron skin = bullet proof? IV = way for poison to get in? If it doesn’t come up again, it needs to go.

Another good way to pull facts and minutiae in, is to use them in relation to a character’s emotional state. What if, instead of my character dryly describing wiping skin with alcohol, she’s trying to start an IV on a crying child and her own baby just got kidnapped by werellamas? That’s a great moment for your character to have some personal revelation about the nature of protecting children, or a mental infodump about “If only my own child were here crying, and I could comfort them like this mother, I wouldn’t have to worry about who is looking after her on this, a full moon night.” Then we’re advancing the plot via characterization, and explaining the factual activity, which is a nice way to block a scene. (Oh, for the good old days when everyone could endlessly smoke, and thus always be doing that with their hands!)

I used to be scared about writing things that could (were vampires real) happen. I felt like I’d be trapped. But over time I realized there’s a beauty in the constraint of facts, and I find that research used really helps my stories grow. Instead of having a vast open plane (actually and metaphorically) my characters could travel through, where anything could happen at any time, and who knew what would happen next, facts gave me a fence line to follow. I know characters can realistically only cover so much distance in a day, or fight with certain weapons due to the time period, or have certain pop culture references. It’s much easier once you’re set into a certain time and place to know how things will have to flow – after running for 20 hours, my protag will have to hide out and sleep, where at, oh, that park that I know is there in my fictional town – where the werellamas roam! Plot spools out from plausibility which comes from personal knowledge.

I was also worried about being found out as a fraud. You do want your writing to be as plausible as it can be – you don’t want your cowboy to tame the dragon he’s bronco-busting overnight, if it’s actually a three day saga in real life. (Real-ish life.) Or, your character to be resuscitated sheerly by CPR when the actual chances of that happening are abysmally low.

But there’s also no use in worrying about pedants, if people using CPR like magic on TV have shown us anything. Most people won’t know when you lie, if lie carefully. Only you can tell if you’re working as hard as you can to make your story work within the constraints of personal knowledge. If you are, don’t let your facts hem you completely in. Sometimes you have to bend facts to fit the story. It is completely okay. And hey, if you’re in outer space or using genre tropes, oftentimes you can consciously handwave out of it anyhow. If you’re telling your story right, people might notice but enough other things will be going right not to care. They’ll be so consumed by the fact that your protagonist has almost found her daughter at the werellama ranch that they’ll flip to the next page anyhow, and your well told story is more important than any single fact.

If you are the boss of your research, and you can keep plot foremost in mind, then beach-comb as many truths to use from your own job/hobby/research-addiction as you can, and you’ll be golden.

Cassie Alexander is an author and a registered nurse. Her debut novel Nightshifted is out now through St. Martin’s Press.