I’m going to tell you one of publishing’s best-kept secrets. It’s time for the truth to come out.

All rejection letters are written by badgers.

This industry protects this sordid secret for countless reasons — not the least of which is the terrible conditions in the industrial rejection factories. Long hours, no pay, unsanitary and and even dangerous conditions.

When I started Shimmer, John Klima took me under his wing and gave me a tour of the factory that Electric Velocipede buys its rejections from.  We had to shout to be heard over the roaring of the machines and the moans of the badgers. “You can never tell anyone about this!” Klima shouted.

Thousands and thousands of badgers, crammed into tiny rooms full of huge machines, darting among the bobbins and levers. I saw one badger get an arm tangled in the machinery. He — or she — was drawn into the machine with a terrible shriek, and disappeared.

The machines didn’t even stop.

Here’s one photo I took with my iPod camera when Klima wasn’t looking. 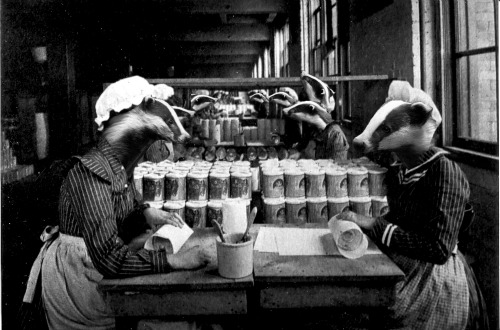 You can’t tell from this picture, but the stench of a badger factory is intolerable, an acrid miasma of badger feces and despair so thick you can touch it.

I knew there had to be a different way, and I vowed that Shimmer would never participate in the badger-factory rejection system. I vowed to find a better way.

Shimmer‘s rejections are written only by free-range badgers who live in companionable colonies in a wooded preserve. They work less than ten hours a week, and spend the rest of their time digging for juicy organic worms, enjoying the fresh air and sunshine, and frolicking with their friends.

When it’s time for work, the badgers assemble in the back garden. Soft breezes carry the scent of honeysuckle, and dozens of butterflies brighten the soul while pollinating the masses of brilliantly colored flowers. Each badger receives a freshly sharpened quill pen, a pot of ink, and high-quality stationery.

After a period of meditation and yoga asanas for spiritual and physical purification, the badgers begin reading submissions. Each story is considered carefully, and in the unfortunate event that a rejection is necessary, the badgers carefully craft a letter to the author.

So the next time you get a rejection letter, just remember. Don’t take it personally; it was written by a badger.

44 thoughts on “The Truth About Rejection Letters”