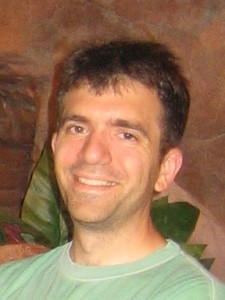 Ramsey Shehadeh tells me this is his first interview. How is that possible?!

Tell us how “Psychopomp” came about.

For as long as I can remember, I’ve had it in my head to write a story about a guy whose job it is to ferry people between life and the afterlife. This isn’t quite that story, but it’s close.

I’m not entirely sure why this stuff interests me so much, except that I grew up sort of half-immersed in faith, and the notion of an afterlife plays to a lot of my obsessions: the troubling contradictions of a benign god who allows hell to exist, the magical things that happen at the borders between places, the enduring danger of absolutes.

But I didn’t really start “Psychopomp” with an agenda in mind. I’ve tried that before, writing to plan, and it always leads to sickly stories that eventually just sort of keel over. This one started with the first image, a demon in an alleyway holding a soul under a flickering fluorescent light, and went from there.

Google Maps, because I enjoy arriving at my destination. Apple Maps does get you very prettily lost, though.

Dungeons and Dragons, of course. You can take the dragon out of the dungeon, but you can’t etc.

Lately it’s The Circle, by Dave Eggers. I distrust how much I love this book, because it plays perfectly to all my paranoid fantasies about ubiquitous internet companies inching their way into every aspect of our lives, and then quietly taking over the world. But I think it really is just a fantastic novel.

The best I’ve read in the last couple of years is Wolf Hall, by Hilary Mantel. My profound ignorance of history really paid dividends with this one, because almost everything that happens in it was a complete surprise to me. Mantel is a ridiculously talented writer, and her Thomas Cromwell is the most fully-realized character I’ve met in a while.

Another book I absolutely adore is Jeff VanderMeer’s Shriek: An Afterword. It’s a kind of a dual narrative, two people telling the same story at the same time, each piggybacking on and extending the other’s view of their shared history. It’s so absorbing and scary and well-written that you barely notice what an amazing technical feat it is.

But my favorite of all is probably Never Let Me Go, by Kazuo Ishiguro. I’ve never read anything that’s drawn so much beauty out of so much tragedy. The novel’s final image still haunts me.

What is currently in your cd player/iTunes/Spotify/8 Track?

Frightened Rabbit, Jonathan Coulton, and Vampire Weekend are my mainstays lately. The Pixies, They Might Be Giants and Springsteen always have a spot on my playlist.

I’m also listening to a lot of terrible 80s music. There was good music floating around in the 80s, but I grew up listening to the crappy stuff, so that’s what I listen to still, helplessly.

“The Veldt.” It really holds up. The notion of our technology eating us is even more relevant now than it was in the 50s.