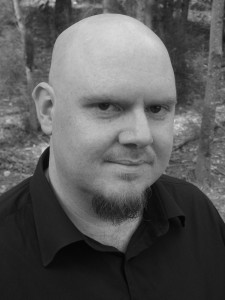 Australian author Ben Peek tells us about “In the Broken City,” his Shimmer 18 story. He’s also going to feed us really well before he abandons us…

Tell us how “In the Broken City” came about.

“In the Broken City” is set in a world I made a few years ago now. ‘Cause I never name anything, someone online, I’m not sure who now, called it the Red Sun world, and it sorta stuck. I think it’s the fifth, maybe sixth of them — a handful of them are being reprinted in my collection, Dead Americans, in March.

The basic idea of the Red Sun world is that everyone in it is living in a end of world time in a vague, steampunk, weird science scenario. There’s environmental decline, social and moral decline, and a remapping of professions. In an odd way, the doctors of the Broken City are still faithful to the original idea of their profession, but of course, they work in a giant underground hospital that may or may not also be functioning as an ark that will provide them with survival when everything above goes real bad.

I’d had the idea of the doctors for a while, but hadn’t really had a story to fit into it until I was reading about xenomelia, or body integrity identity disorder, which is an mental illness wherein a person feels that a limb on their body is not their own, and go to extraordinary lengths to remove it. One of the controversial ways of dealing with it is to organize an amputation through the person’s limb, and there are recorded cases of men and women who are healthy after that. Naturally, I thought I should use that as a starting point for my story – and so “In the Broken City” begins with a man who, after his leg has been removed, is in the happiest place he’s ever been.

Honestly, now, how could you not write a story about that?

You write both short stories and novel-length works; do you prefer one over the other? Does one come easier?

Truthfully, these days, novels seem to be easier to write.

It puzzles me a bit, y’know. I remember coming across the short fiction of Peter Carey years ago, and thinking it was superb, at its best equal to the best of his novels, but by then, he’d stopped writing them. In a Paris Review interview, he said that he had become addicted to the dangers and pleasures of the novel, but he said that in the early 2000s. Maybe twenty five years ago before that he wrote a letter in which he said, “And who the fuck wants to read short stories anyway? Who does? Who reads them- two thousand academics and people who work in publishing houses? What’s the point?” Both probably exist as reasons in the great strand of life – it is hard to imagine that a short story Carey wrote now would struggle for an audience, but it is easy to see a younger author struggling to find an audience and a life looking to the form he was writing and blaming it for its failure to be commercially viable.

I think for a lot of authors that experience rings true, but I found it a bit unsatisfactory to explain myself. There are different dangers and different pleasures for both, and I’ve had no one read both a short piece and a novel of mine, because I’m lucky like that, I guess. Instead, what I have started to think that the skillset for writing a novel is a bit like a costume, much like the skillset for writing a short story is another, somewhat similar costume. But because it takes me roughly a year to write a novel, I wear that costume a lot longer, and I’m a lot more comfortable in it, and when it comes to a short piece, I suddenly find myself confused on how to strip down and change.

Tell us something about Sydney. If we came to visit, where might you take us?

There’s this cool vegetarian place in Sydney called Mother Chu’s. Mother Chu — if she is indeed Mother Chu — is this tiny little old Asian lady who sits in the back corner of it, wrapped in blankets, and who smiles and waves as you come in and go, and they make some sweet food there. I’m not vegetarian or anything, but good food is good food, and its pretty cheap, and still has that worn out feel I like in Asian places, so I’d take you there, before I abandoned you in the main hub of Sydney with its one way streets, confusing back alleys, and abandoned monorail.

It’s a cool place, though. Lot of variety, lot of different people, cultures, etc. It’s a real shame that the new government wants to get behind that argument that the Multiculturalism Experiment has failed. I mean, seriously? It was an experiment? The world is multicultural, and you live in the world. But no, they want to push that it’s some kind of social failure, that the grand old man of Western culture is struggling to draw breath, that people aren’t learning good, christian values – so you ought to probably come visit before that sort of ideology sinks its claws in over here, and see a large, multicultural city and country with nice, clean empty skies and sun that feels different to a lot of visitors.

Tell us about the best book you’ve read lately.

The best book I read last year was Coetzee’s DISGRACE. I thought that was a superbly done book, excellently structured. I recommend it entirely. I’m currently reading Forster’s A PASSAGE TO INDIA, which has some amazing writing in it, really. I also totally loved the latest issue of SHAOLIN COWBOY. Few people give you four issues of one man, two chainsaws, and a pole against an endless horde of zombies, but if the few people who do are going to number Geof Darrow, then fuck it, man, just hook the tube to my arm and leave me be in my high.

I don’t really like Bradbury at all, I’m afraid.

There’s something in the writing — just the way he does it, that turns me off. It’s just taste, for the largest part, but I also think Bradbury has to get you before you’re too cynical and disillusioned, when you’re young, and for me, it just didn’t happen. But such is life.