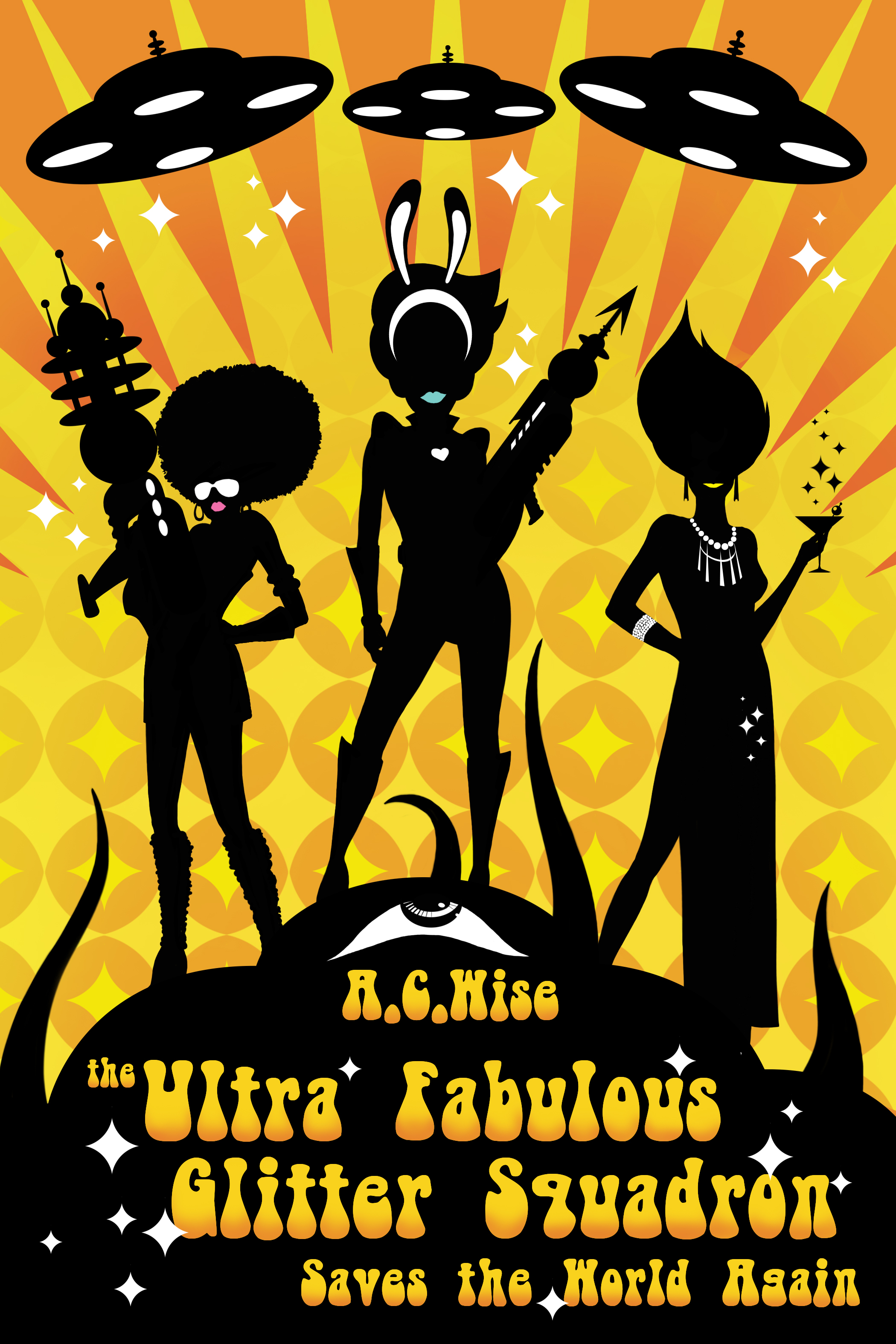 A.C. Wise first hit Shimmer’s pages in issue #14, with her story “Trashman.” We’ve been lucky to have her four more times, including one of her Glitter Squadron stories, “How Bunny Came to Be.”

She hails from the land of poutine (Montreal) and currently resides in the land of cheesesteaks (Philadelphia), and today we’re helping her welcome THE ULTRA FABULOUS GLITTER SQUADRON SAVES THE WORLD AGAIN. This collection debuts tomorrow, and if you didn’t pre-order like we did, you can grab your copy from Lethe Press or Amazon!

A.C. was awesome enough to sit down and chat with us about this collection. Be sure to stick around, because at the end, you’ll find a Glitter Squadron Drink Generator and an opportunity to win some glittery swag!

What was the process for putting this glittery collection together and does it collect every Glitter Squadron story to date?

As far as collections go, The Ultra Fabulous Glitter Squadron Saves the World Again is a bit of an oddity. It all started with “Doctor Blood and the Ultra Fabulous Glitter Squadron,” the first story I wrote featuring the wonderful ladies of the Glitter Squadron, which was published at Ideomancer. I thought it was a fun one-and-done kind of thing, but then along came “How Bunny Came to Be,” a prequel story, which appeared in a wonderful publication you may have heard of called Shimmer. I briefly thought I might be done after those two stories, but as it turned out, the Glitter Squadron had strong opinions to the contrary. Aside from “Doctor Blood,” and “How Bunny Came to Be,” all the stories in the collection are original. The ladies (and M) had plenty more to say, and about the same time I started writing the rest of their stories, Steve Berman at Lethe Press approached me about doing a collection. The rest is history!

What can readers expect to find in this collection?

Sequins! Drink recipes! High heels! Ass-kicking! Friendship! Exclamation points! Okay, that last one might just apply to my answer to this question. What readers can expect is a series of inter-connected short stories about a group of queer, trans, agender, and gender fluid characters saving the world from various supernatural threats, all while looking terribly fabulous in glitter, lame, velvet, feathers, and so on. It’s a bit campy, a bit serious, a bit about gender, and hopefully a lot of fun. It is also about different ways of being strong, and about how glitter is the best thing ever and severely unappreciated when it comes to world-saving materials.

“Dr. Blood and the Ultra Fabulous Glitter Squadron” (Ideomancer, 2013) appears to be the first story in this universe; what sparked the initial idea for you?

The original story was sparked by a call for submissions for an anthology themed around B movies. I happened to see this call for submissions just over 24 hours before the deadline. Oops. My Unlikely Story co-editor and I dared each other to see what sort of story we could write within such a short time frame. And thus, the Ultra Fabulous Glitter Squadron was born.

We had the good fortune to publish “How Bunny Came to Be” (Shimmer #17); it is a story that speaks to being true to oneself, whatever that self may be. This feels, in some ways, to be the heart of the Glitter Squadron, but what other themes are in play?

Friendship, in particular, female friendship, to me is the heart of the Glitter Squadron. Too often we get dude-centric narratives where one, lone exceptional woman is allowed into the club. Said woman then has to stand for all women everywhere, because anyone outside the cis-het-white-able-bodied-male is not part of what is ‘normal’ and therefore has to answer for their entire gender/race/sexuality etc. They are not individuals. The one lone exceptional female ends up being criticized no matter what she does. If she’s too girly, she’s a stereotype. If she’s too tough, she’s just a guy with boobs. If she’s too needy, then she’s saying all women are needy. If she falls in love, well of course she does because all any woman cares about is getting married and having babies. Often times, said lone exceptional woman never even gets to speak to another woman the entire time she’s on the page or screen.

However, with more than one women, or even a whole group of women, you start to see that women are indeed human beings. They want different things. Some of may be interested in babies and relationships. Some may be worried about a bad hair day. Some may have PTSD from their time in the military. Some may know exactly who they are and carry themselves with confidence; others are insecure, and still trying to figure it out. But none of them are carrying the entire weight of their gender alone. Together, they’re stronger than they are apart. They support each other, and complement each other’s strengths and weaknesses. They don’t always get along, but ultimately they are family, and they love each other.

Aside from CeCe and M, the members of the Glitter Squadron are also very ‘girly’, which was another important theme I wanted to explore. They wear glittery dresses and high heels and makeup. They are fabulous and badass and they aren’t asked to shed the traditional trappings of femininity in order to be battle ready. Femininity isn’t demonized. In the end, the Glitter Squadron members are far from perfect. They have their insecurities and flaws, but together, when they aren’t asked to carry they entire weight of femininity on their shoulders alone they are fucking strong.

Do you have a favorite story in the collection?

Nope. I love them all for different reasons. The collection is anchored by two stories featuring the team as a whole, but most of the stories in-between take the time to explore some aspect of one of the individual characters. They were all fun to write in that they allowed me to get to know the Glitter Squadron as individuals and as a team along the way.

Picture it: Netflix wants to make a Glitter Squadron series. Any casting dreams?

Eeep. This is a hard question. Part of me thinks that largely unknown actors might be the way to go. I do have certain specific casting ‘rules’ I would insist on, presuming this is a magical world where the lowly author gets a say. Sapphire, Starlight, and Bunny would be played by trans actresses. No one would be white-washed, thin-washed, or straight-washed. Looking up various trans actresses make me think that appearance-wise, some combination of Estelle Asmodelle, Candis Cayne, Nina Arsenault, and the late Coccinelle would be perfect for Bunny. However, even though I saw Bunny as Caucasian while writing her, there’s no reason why she has to be, and I think Laverne Cox would be a brilliant Bunny. For Sapphire, someone like Ines Rau, but a bit older would be excellent. CeCe was actually directly inspired by photos of Marlene Dietrich in a tuxedo, and Renate Muller as the original star of Victor Victoria. In a modern show, I think Scarlett Johansson could totally rock that 1930s suave-butch look. Someone like Aidy Bryant would be good for Ruby. As for Penny, Starlight, and Esmeralada…I’m still thinking about those ones. And M? Well, maybe whoever wore the gimp suit in the first season of American Horror story?

Which would you rather have a squadron of: poutine or corgis?

Corgis. I love poutine, but I don’t think it would make a very good squadron. Corgis, on the other hand, can be pretty fierce (I say as my own corgi is passed out snoring beside me). People tend to think of them as small dogs, but secretly, they’re big dogs with no legs. And if you get between them and food…well you can forget about it.

Is there a soundtrack/playlist for the Glitter Squadron?

Funny you should ask! I was just thinking about what song each member of the squadron might listen to in order to get pumped up before a fight. So I went ahead and put one together, and you can find it here.

What does the future hold for the Glitter Squadron?

The Glitter Squadron fans out there (if there are any) may be pleased to know that there are at least three more stories rattling around in my head. I haven’t done anything with them yet, other than make tons of notes, so I’m not entirely sure whether they’re short story length things, longer pieces, or if any of them will ever see the light of day. I am quite enamored of my beautiful, glittering ladies however, and thrilled to keep chronicling their stories as long as they keep telling them to me.

Now that you’ve had a taste of what the Glitter Squadron is all about, don’t you want a customized cocktail recipe of your very own? All you have to do is use the Glitter Squadron name generator to create your drag name/cocktail name, and drop your results in the comments.

A winner will be chosen at random, and the Glitter Squadron’s bartender supreme, Sapphire, will create a drink recipe for you based on the name. But wait, there’s more! You’ll receive the recipe on a Glitter Squadron coaster along with a glittery flask so you can take the party with you wherever you go. Contest closes on Monday, October 26! 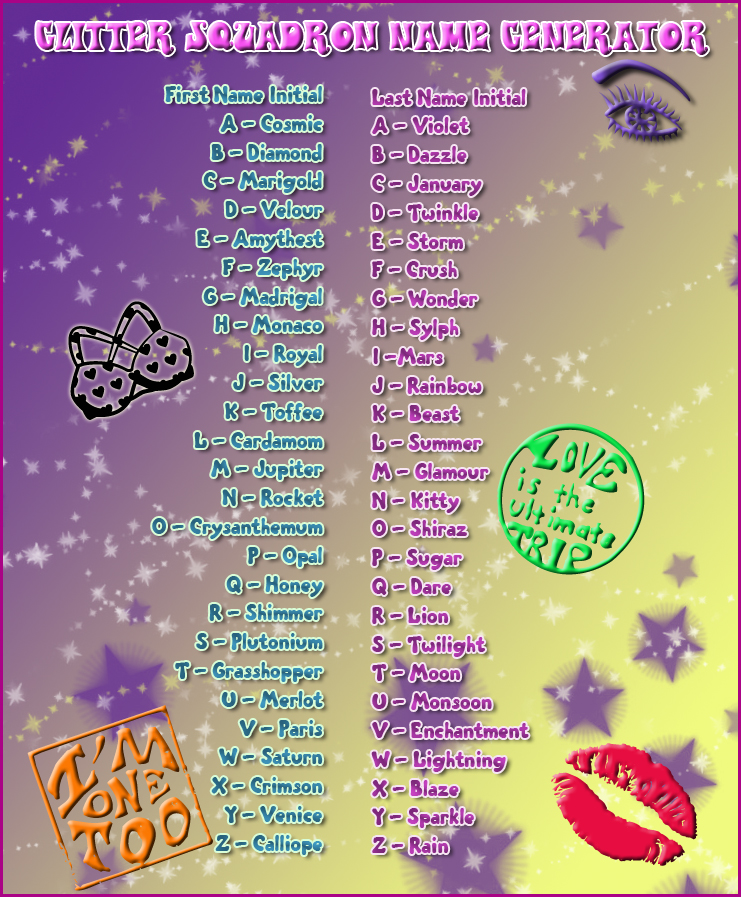