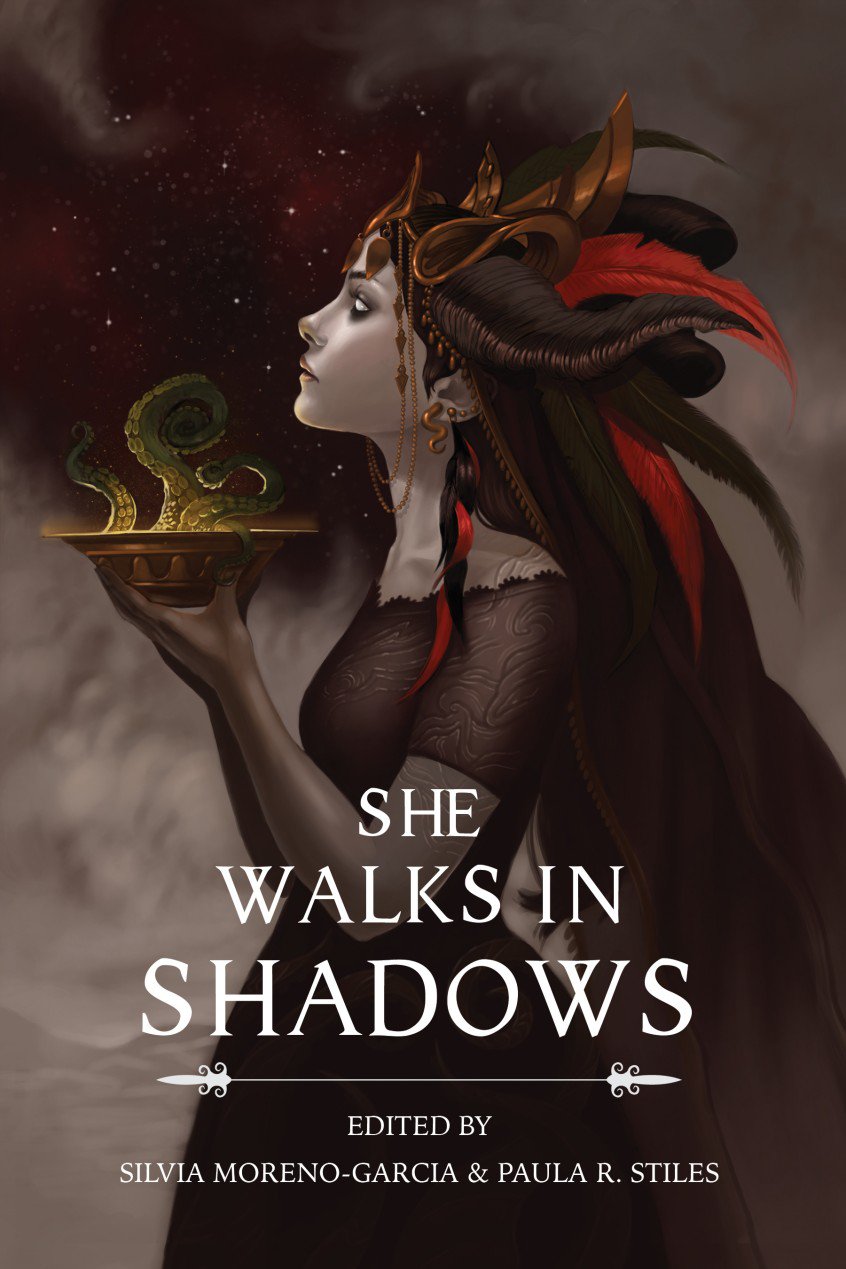 She Walks in Shadows is the newest anthology from Innsmouth Free Press. Best dressed editor Silvia Moreno-Garcia was kind enough to sit down with me in this virtual space and talk about the project, which I and another badger have stories in.

How did She Walks in Shadows come about?

There was a discussion; it started on Facebook and trickled into some other spaces, which made it obvious most Lovecraft fans couldn’t name more than one woman Lovecraft writer (Kiernan), and some couldn’t even recall her. There was even a gross comment that women are biologically incapable of writing Lovecraftian fiction. As often happens in these discussions someone will pipe in and say “if you don’t like it why don’t you do something about it rather than whining,” so, since I actually tend to do things, we got together this anthology project to help showcase the work of women .

The cover art is striking and beautiful. Who did the art and what was the idea behind the image? Was it just “women and Lovecraft, go”?

That’s Sara K. Diesel‘s work. She did the cover for This Strange Way of Dying, my debut collection, and I contacted her for this. I asked her to do something inspired by a rather lousy movie with Barbara Steele called The Crimson Cult. Despite being kind of dull it features Steele in a distinctive headdress. I asked Sara to create a cultist or priestess inspired, but not identical, to the one in that movie. Her sketches were very good and I picked one with a profile pose because it seemed different than some of the other covers we’d done before.

With the anthology, what was it you most hoped to accomplish and what did you want to avoid?

We wanted to feature a wide variety of voices and characters. Not just women as heroes, but as villains, mothers and daughters, young and old. We didn’t want it to be too Mythos heavy. It’s always a delicate dance because some buyers love and only love the “monsters” and deities, but others want stuff that uses less places and people utilized by Lovecraft and is more about mood or ideas. So there’s that back and forth. We didn’t want to just have the Who’s Who of 1920s Lovecraft Mythos and I believe we avoided that. Cthulhu appears, but probably not the way you expect him, we get a kind of funky Asenath thanks to Molly Tanzer, and some people go ahead and spin stories like the opening one, about Lovecraft’s mother, which don’t namedrop any famous entity but are still preoccupied and responding to Lovecraft in some way. The anthology also features a good number of POC contributors, seven as I recall, and other writers who are not POC but are from outside the United States, which is obviously a dominant force in the Mythos market. So you get to meet people like Inkeri Kontro who is from Finland and I think it helps to show how widespread Lovecraft is nowadays.

After all these years, and all these beautiful anthologies from Innsmouth Free Press, why Lovecraft? What is it about him and his stories that continue to fascinate?.

To be honest I don’t know how much longer I’ll be dealing with Lovecraft. I am working on my thesis, and it involves Lovecraft and eugenic thought in the early 20th century, so I’m very much exhausted of reading about him by now. Next year, after that’s done, I think I’m going to take a long stretch of time without him, maybe I’ll even be done with him forever. I’ve had a long time to build a dialogue with him and I’ve worked hard to get more POCs and women noticed in this niche, but at some point I guess we all grow out of certain things and I’m at the point where this might be true for me and Lovecraft. On the other hand, my husband thinks I’ll never stop. I’ve been reading Lovecraft since he’s known me, which is a long time, and he can’t picture me without something vaguely related to him in my hands. We’ll see.

Do you have a favorite Lovecraft monster?

The Deep Ones. It’s not Lovecraft per se, but I liked Derleth’s Ithaqua. I live in Canada so part of the appeal is the snowy landscape.

How did you first discover Lovecraft?

Like most people, as a teenager. I read Poe and then moved onto Lovecraft, and from then on read quite a bit of pulp fiction and Gothic fiction for a while.

After reading, editing, and writing so much Lovecraftian fiction, what’s your advice for writers jumping into the genre?

Know your Lovecraft. There’s a lot out there and you want to know the original sources but also some of the newer stuff that’s been done. But knowing doesn’t meaning imitating. Trying to slavishly replicate Lovecraft’s style is not going to get you very far.

My second novel, Certain Dark Things, sold recently and will be out in 2016. It’s about a garbage collector in Mexico City who ends up involved with a narco vampire and they find themselves trying to outrun rival narcos, cops, and almost everybody.

Thanks, Silvia! Readers, you can grab She Walks in Shadows here, in a variety of formats, including a beautiful trade paperback! You should also grab Silvia’s debut novel, Signal to Noise. The badgers give it two paws up.