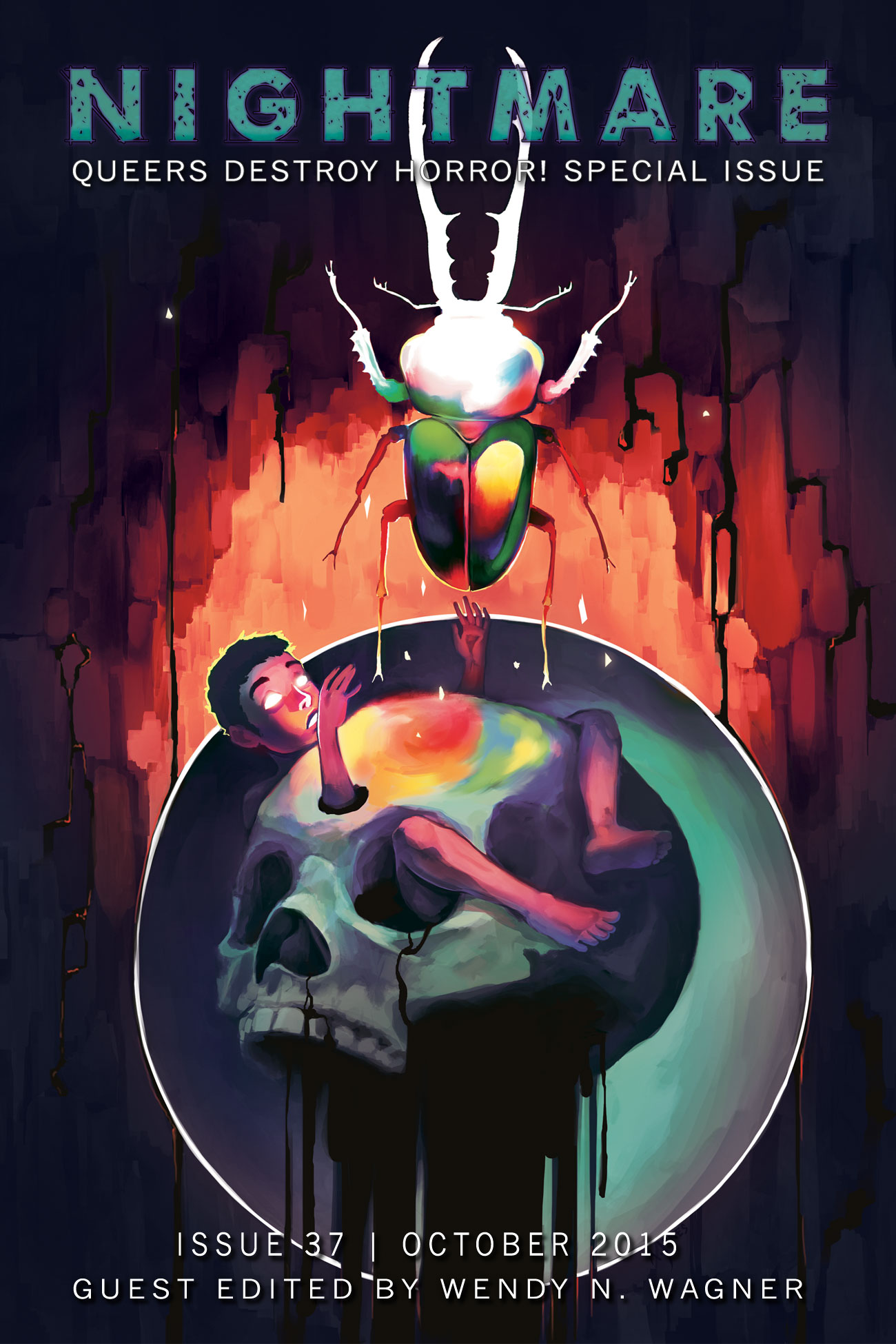 Queers Destroy Horror is a double-issue of Nightmare that’s written, edited, and illustrated by LGBTQUIA creators. There is a former Shimmer badger among them — not to mention a couple Shimmer authors in the mix, which we love to see. Today, we’re talking to guest editor Wendy N. Wagner about the project, monsterflails!

QDH is the newest member of the Destroy family. How did this amazing journey begin?

The Destroy projects really ARE amazing. Back in 2013, Christie Yant, one of our Lightspeed Assistant Editors, got fed up with the state of genre fiction. The genre’s main trade organization, SFWA, had included some articles that were disrespectful to women; bloggers and analysts (like Nicola Griffith) were putting together uncomfortable statistics about the ways women writers don’t make recommended reading lists or get reviewed in the same ways that men do. And then an article came out that claimed Lois McMaster Bujold’s books weren’t real science fiction, because they included romance and balls and court scenes with descriptions of people’s clothes. So Christie made a joke on Twitter about how women were just DESTROYING science fiction with all our icky girl germs, and the joke sort of snowballed.

The publisher of Lightspeed and Nightmare, John Joseph Adams, thought the joke could be used to make a positive difference in the industry, so invited Christie to do a special issue of the magazine that would celebrate women’s work in science fiction. They wanted to make it really special and really inclusive, so they decided to run a Kickstarter campaign to give them some extra funds to work with. The Kickstarter exploded! They (we, by that time, because John had brought me on as the Managing/Associate Editor of his magazines, and I immediately wanted to help with Women Destroy SF) raised ten times the amount of money they had hoped to make. And the feedback was phenomenal! People wanted us to destroy everything. And everybody wanted a chance to come out of the shadows and show the world how they could contribute to the field.

Last year, we published Women Destroy Science Fiction!, Women Destroy Horror!, and Women Destroy Fantasy!; this year we’ve asked gender and sexual minorities to smash up the genres. Next year we’ll be putting people of color in the driver’s seat.

Talk to us about this cover art — it’s amazing. How did this concept come about?

When the team was working on the cover for Queers Destroy Science Fiction!, they really struggled to find an image that meant “science fiction” for them. I was just a fly on the wall, listening to their conversation, and I found myself thinking that for me, nothing said horror like a skull. And I immediately had this vision of a skull with this black beetle crawling on it, and the beetle’s carapace had this wonderful rainbow shimmer on it.

So when Cory Skerry, our art director for QDH, asked if I had any ideas about the cover art, I shared that idea, and he thought it would be cool. Neither one of us was really prepared for AJ Jones to come back to us with this image. It’s so much more nightmarish and exhilarating than what we imagined!

Why horror? What draws you to the genre?

The strongest memories I have from early childhood are all about Halloween. My mom and my sisters always made these great costumes and we decorated the house and made a big fuss about it. It seemed like Halloween was made out of some kind of magic — the kind of stuff that let three-year-old kids turn into bats and made candy into an acceptable meal. I loved (and still love!) everything about Halloween. I can not get enough of it. So much of horror looks and feels like Halloween. I can’t resist that aesthetic!

On the other hand, I’m also a super emotional person. Unhappy things affect me deeply, and the heart of horror is unhappiness and darkness and the deep injustice of bad things happening to people. And reading about that stuff in a safe, fictional way helps me cope with the real world.

Plus, being scared when I know I can hide under the covers is the most delicious feeling possible!

After choosing the stories for this issue, what advice do you have for writers working in horror?

Worry less about being original and more about being meaningful. If you infuse your work with a feeling that comes from your core, you can make any situation, any trope, any monster interesting. Look at Let the Right One In. At a time when people were rolling their eyes about vampires, this story came along and hit them over the head. Why? Because it’s such a powerful story about being isolated and lonely and finding someone who gets you. It’s very meaningful and real.

I want to read stories that make me feel. So get out there and scrape up some feelings!

What makes for a great horror story?

A main character whose feelings and thoughts come clear in the prose. Every image and plot development is only as interesting as that character’s response to it, so if your character is a piece of cardboard being dragged along by the story, your story will fail.

In your QDH editorial, you mention falling in love/horror with “The Raft,” from Stephen King’s Skeleton Crew collection. What other authors and stories have influenced your writing (and perhaps editing)?

The unintentionally big influences on my writing are Margaret Mahy, Pamela Dean, Robin McKinley, and David Eddings. These are the writers I read and re-read as a kid and I absorbed them like I was a sponge. I don’t mind writing like the first three, but I am still trying to expunge David Eddings from my brain, because I don’t think I want to write like him. (His books are still fun — they’re just not me.) Some influences I’ve tried to cultivate are Octavia Butler, David Mitchell, Tana French, and Scott Fitzgerald.

But the person who has had the biggest effect on my work as a writer (and editor) is John Joseph Adams. He’s published me a couple of times and the edits he gave me were incredibly insightful—I learned a lot just working on them. And I’ve been his editorial assistant or assistant editor or associate editor on and off since 2010. I’m hoping some of his good taste has rubbed off on me.

You recently did an amazing thing–bringing home a Hugo for the work done on Lightspeed, Nightmare’s parent pub. Is that thing heavy, or what?

The Lightspeed team won the Hugo for Best Semiprozine, and the group included John Joseph Adams (our editor-in-chief/publisher), Stefan Rudnicki (our podcast producer), Rich Horton (our reprints editor), Christie Yant (head of special projects and Guest Editor of WDSF), and me, so there was rather a horde of us. It takes a lot of people to make the magazine come together!

The Hugo award this year weighs about 8 or 9 pounds. The base is also covered in metal triangles that are quite poky and sharp-edged. It looks like a medieval mace or something. It’s kind of terrifying.

Horror seems to be making something of a comeback with television series like Scream Queens, American Horror Story, and Hannibal. Do you think visual horror is more effective than written horror, or are they simply two sides of the same coin?

I think visual horror is a paper dollar bill and written horror is a gold one dollar coin — they’re equally effective, but most people seem to prefer using paper. Visual horror has a lot of advantages, like jump scares and musical scores, and I think it has the luxury of building on a visual language that has saturated our culture. I mean, even if you haven’t seen the movies, you’ve usually picked up some of the tropes and standard images coming out of popular horror movies. That can make a new horror film/show more accessible to new viewers.

I know a lot of people who say they don’t find themselves as frightened when they read horror as when they watch horror. But I also think that horror is about a lot more than just being scary, and that’s where writers get a chance to shine. Horror is the genre where we get to explore everything dark in the world. Fear is one part of that, but I think it’s just one corner of the playroom.

If you could invite one horror author (dead or alive, naturally) to tea and spider scones, who would it be?

Shirley Jackson! I just read Let Me Tell You, a new collection of shorts and essays by her, and I’m pretty sure we have a lot in common. Plus, I love her work. She’s the writer I most want to be when I grow up. I mean, if I have to grow up. 🙂

What’re you destroying next? What does the future hold?

I am currently revising a novel that is destroying science fiction with werewolves and philosophy. I am very excited about it. I also have a new novel coming out in August, which is a dark adventure set in the world of the Pathfinder role-playing game. It features the same main character as my first novel, Skinwalkers, although it’s not a sequel per se, and I think it’s going to be a really fun book.

Thanks, Wendy! Readers, you can get your mitts on QDH here. The issue is available online, in trade paper, and a variety of ebook formats!