A new novel hits the shelves today — Hunger Makes the Wolf by Alex Wells. You might not know this name, but this is a Shimmer author in disguise. Alex took the time to tell me about their novel, and this world, both of which I hope you adore as much as we did. And yes, this interview contains those marvelous words, “the sequel.” Happy release day, Alex!  –ect 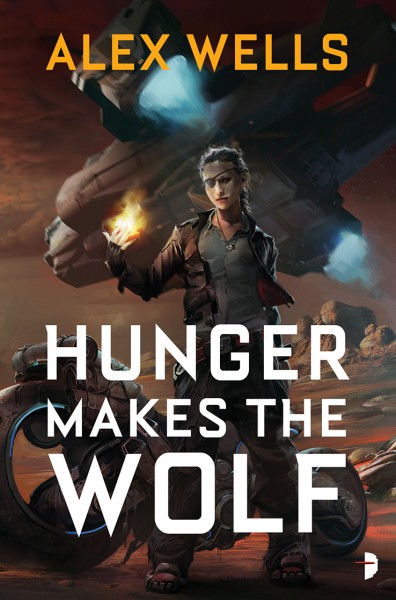 Shimmer readers may know you best from your short fiction (as Rachael Acks); tell us how you turned your thoughts toward a novel length work, and this story specifically.

This is actually the fifth novel I’ve written—but the first one that’s been fit to see the light of day. I’ve been more comfortable in long form for a while; back in my fanfic day, I was Mr. Thirty-Plus Part Epic. Short fiction was more of a recent thing because I decided to try it as my entry point for writing original fiction and getting published. There’s a lot less time sunk into writing a short story (or novelette or novella, which is really my preferred length because my goodness I am long-winded) so it felt like a better shot at trying to find my way. I’m honestly still not sure if that was my smartest idea, because my constant struggle to try to come up with stories I can tell in less than 10,000 words is kind of hilarious. But then it turned into a challenge, because I still feel like I’m not great at short fiction, and gosh darnit, I want to be able to write consistently decent things.

Hunger Makes the Wolf actually started with the short story Fire in the Belly, which I finally sold to Mothership Zeta last year. Then I started writing more stories about Hob’s life, and my friends gently pointed out to me that these were really more chapters in a book. So fine, I wrote a book.

The book has a weird west feel to it; many reviews liken it to Dune and Fury Road, but I’d also dare to mention Firefly. Everything feels real and gritty and immediate. Were there other speculative worlds that helped inspire this one?

I think Firefly definitely deserves a seat at the influences table, if for no other reason than it showed me how wonderfully Wild West and Scifi can work together. I really wanted to take that aesthetic and combine it with the utter expansive feeling you get of living in the mountain west. I also watched a bit of Deadwood because my housemate around that time was into it. Not really my show, but I think that also got me thinking of grit and dirt and just how sweaty you get, running around in that much direct sunlight.

In the book, Hob hides part of her nature, as “witchyness” isn’t fully accepted by the world at large. At times this read as a metaphor for our own less-than-accepting world. Was that intentional, or something that developed along the way?

That was definitely something that developed along the way. It’s not an intentional allegory for any particular difference, though I know you could read nearly anything into it and I’m also not going to say any particular interpretation is wrong. I wanted to have a small group of people able to do some Really Weird Shit™ that was connected to the wider strangeness of the world. But of course, when you set up a minority group that can be picked out and used as a scapegoat (in this case by corporate interests who want to keep their workers divided), particularly a minority group which could exercise real power within a society if it weren’t consistently oppressed, we’re going to see parallels with the modern world. Because that stuff has happened and is still actively happening.

I recently finished Uprooted by Naomi Novik, and the friendship between Kasia and Nieshka is everything my heart has ever wanted. Anne Bishop’s Black Jewels books are some of my favorite brain candy reads, and one thing I love about them is that they center on female characters and there are so many strong friendships to be seen. I wish I could think of a few more examples, but most of what I’ve read has had a lot of male characters, and some pretty solid male-female friendships (which are great in their own way), but not a whole lot centering female friendships. That’s part of why the Mag and Hob relationship is so important to me.

What is UP with the Bone Collector? So creepy, so fascinating. Where did this character begin?

He started as a statue sitting next to an underground lake in one of Hob’s earlier adventures, not included in Hunger Makes the Wolf. I wrote him as sort of the otherworldly, overly-mysterious guide character, and then he just developed from there, much to Hob’s annoyance. There is a lot more up with him than that, but if you want to know what it is, you’re going to have to wait for the next book. All of his secrets get revealed.

I had a ridiculous amount of fun writing the final combat scene, which I’m not going to spoil here, but I wanted to make it as gonzo ridiculous as I could. That’s a tie with the scene where Hob punches the Bone Collector in the face, because there has always been a part of me that wants to punch characters like him in the face, and that was my chance.

The most difficult scene to write was early on, when Mag deals with smiling Mr. Franklin. I felt so creeped out by everything involved in that, and genuinely scared for Mag as I was writing it.

Does this book have a soundtrack? Is “Hungry Like the Wolf” by Duran Duran on it?

It does have a soundtrack, of course. While I was writing it, I actually listened to the soundtracks from the Transformers films. Because those movies are absolutely awful, but the theatrical scores for them are great writing fuel. I also built a playlist with songs that reminded me of the various characters–which sadly includes no Duran Duran, but a significant amount of Flogging Molly and Dropkick Murphys. There’s an incomplete version of it here if you’re curious: https://www.youtube.com/playlist?list=PLCt4iTv8uk5S15hivnIm_a0ItbSdiMXKm

In that same vein, which member of Duran Duran would play the Bone Collector in the film adaptation of the book? Who would play Hob?

Nick Rhodes, if I’m allowed to import him from the 80s. Though to be honest, I always envisioned the Bone Collector as a bit more David Bowie, because of course the weird, mysterious dude is going to David Bowie. I’ve had a heck of a time trying to come up with an answer for the Hob question. When I look up actresses, it’s all publicity shots and it’s like… all of them look way too pretty and not nearly pissed off enough to be Hob. Maybe Olga Fedori? Or Milla Jovovich. She has a great angry face.

What’s next for you? More books? Scripts? Watching bad movies for good causes?

Well, I’m writing the rough draft for the sequel to this novel right now. I’ve got a lot of stuff in progress for once that’s put to bed—a couple novellas, a romcom script that I’m feeling really good about, and a few short stories that have been languishing while all my energy goes into the novel. And I’ve got a short story set to come out from Tor.com later this year!

Thanks, Alex! Readers, check out HUNGER MAKES THE WOLF from Angry Robot, and also go visit Alex on their site, katsudon.com! You can find Hunger Makes the Wolf at Angry Robot, B&N, and Amazon.