Shimmer author Kristi DeMeester’s debut novel, Beneath, is out on April 30th from Word Horde. Kristi was kind enough to spend some time with us, pondering scary things and the nature of snakes… 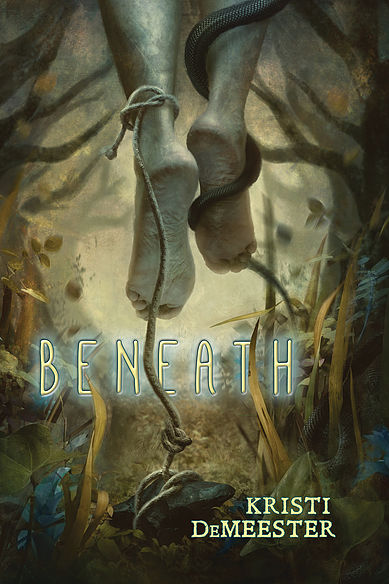 Tell us how Beneath came to be.

Beneath started while I was in grad school as a very different book. I’d been reading far too much Pat Conroy and was trying to write a bastardization of The Prince of Tides. In order to graduate, you had to submit 150 pages of a novel to selected advisors, go through the critique and revision process, and then do a formal presentation. I got about fifty pages into that first book, when I realized I wasn’t telling the right story. The mother in that first book was Ruth McDowell, and her story—filled with snake handling and delusion—was infinitely more fun than the one I was writing, so I turned tail right then and started writing of the night Ruth gave birth to her daughter with the fleck of red in her eye. After that, I dutifully wrote 100 more pages, submitted it in dead exhaustion, and then didn’t touch it for another two years. It was only when an agent reached out to me, asking if I had a novel, that I dusted off Beneath and realized it wasn’t as terrible as I remembered. I made a pledge to myself that I would spend that summer finishing it, and so, slowly but surely, I added 1,000 words and then 2,000 words a day until it was finished. By that time, it had become something completely different: the story of a journalist facing what seems to be demonic possession but is actually the awakening of something much older. After that, it went through rounds and rounds of revisions until Ross Lockhart asked to take a peak, and he was kind enough to see something in it and agreed to publish it. Four years after I started it.

Do you have a favorite snake?

NOPE. I don’t like snakes. At all. I realize the irony in that, but I’m terrified of them.

What kind of research did Beneath entail? Was there anything fascinating you discovered in the course of research, but it still didn’t fit into the book?

I pulled quite a bit from my own background with fundamentalist religion, but I did research on the practicalities of snake handling. How the preachers will keep the snakes close to starving in order to keep them docile, which seems like the opposite of what you would want, but is true. A lethargic snake is less likely to bite or feel threatened than a lively one. Research about the flora and fauna of Appalachia itself was something I had to pare back but wasn’t that interesting. There’s a detail in there about how to siphon gasoline out of a car without using your mouth, which I thought was cool. It’s still in there. I don’t think anything fascinating didn’t make it in. I wish I did have a little nugget to share!

Beneath deals a lot with ritual, with belief. Do you have rituals when it comes to the writing process?

Right now, my ritual is firmly grounded in being flexible. I write most often upstairs, in my bedroom, in a little nook that has a chair. If I have quiet, I need ambient music, but usually the television is on in the background and someone is trying to talk to me.  In the summer, when I have hours that belong only to me, the ritual is coffee, stare at the screen, type a little, check my email, more coffee, type some more. Minimum of 500 words a day. If I get more, great. If I don’t, that’s okay. Slow and steady.

When did you decide you wanted to be a writer?

I came to writing later than a lot of people, and for that I have some regrets, but I also think those years formed and shaped the fiction I was going to create. In 2008 I started writing semi-seriously. I had just gotten married, and I was going through some old folders when I found a story I’d written while I was student teaching. I remembered how I’d written it only for me, for the sheer enjoyment of doing it, and I thought yes, this is something I want to do. I applied for grad school and got in and then spent two and a half years writing terrible workshop pieces, but I learned a lot and find the experience invaluable. In 2010 I started submitting in earnest.

What is it about dark fiction that draws your interest? Was there a certain moment that you remember saying “oh yes, this is for me”?

I’ve always liked spooky stuff. I was the kid who got into trouble for the books I brought to school. I tried for a long time to write things that were not dark, but everything felt forced and stilted and when I finally came back to it, it was like coming home. The very first story I remember reading and wanting to emulate was Charlotte Perkins Gilman “The Yellow Wallpaper.” There was something that disturbed me so much about that story. Later, I realized it was the true horror of that quiet, little story. How things in our lives can morph and change into things we don’t understand, and I wanted my fiction to be like that.

Related to that, what’s the moment in a horror movie or book where you were really and truly scared? Whose work made you feel that?

That’s the hardest question ever for a horror fan. Because after a time, you aren’t really scared anymore. Perhaps unsettled or disturbed or uneasy, and, for me anyway, those emotions are more powerful than the jump scare. Stephen Graham Jones has been one whose writing has left me feeling that way lately. Laird Barron. Robert Shearman. Livia Llewellyn. Joyce Carol Oates. Michael Wehunt. For films it’s even narrower. Stoker left me both fascinated and terrified. I like my horror quiet and gentle. The kind that sneaks up behind you and whispers poison into your ear. Picnic at Hanging Rock and Lake Mungo did that for me.

You write both short stories and novels; how is the process different for you? How is it the same?

Novels can feel more defeating because the pay off of the end is so far away. The process is largely the same because I don’t outline, but I have to allow myself to stretch out and breathe, which is hard for me sometimes because I’m such a fan of ambiguity and brevity.

Do you have a favorite story among your own?

As of now it’s a tie between “The Language of Endings” which appeared in the April 2017 issue of The Dark and “Saints in Gold” which is forthcoming in a Ramsey Campbell tribute anthology titled Darker Companions.

Picture your own work as a compass; are there authors who make up north, south, east, and west for you? Authors who gave/give you guidance along the way?

The constant need to put out new work. To not settle for the same story I’ve always told.

Loss. Not living up to my own expectations. Failure.

Does Beneath have a soundtrack?

The Southern Gothic playlist on Spotify.

If we came to visit you in Georgia, where would you take us?

For a beer at one of our local breweries and then outside under the stars somewhere to experience what it smells like in Georgia when the sun sets.

My debut short fiction collection, Everything That’s Underneath, is forthcoming from Apex Publications this summer. My second novel, The Kingdom of Beasts, is out with agents currently. I’m at work on my third novel, currently titled Lessons in Vanishing.

Thanks, Kristi! Readers, you can get a signed copy of Beneath with the ebook directly from Word Horde when you buy the Beneath bundle! You can also find Beneath at the usual suspects, Amazon and B&N.