Has this summer been a crazy one for awesome books, or what! Today, we’re chatting with A.C. Wise, a Shimmer regular who is out with her first novella-length work, Catfish Lullaby!

She’s also running a giveaway for a free copy, so as soon as you finish reading, you need to hop on over there, and enter! We still think it (and all books) should be called Badger Lullaby, but whatEVER. We enjoyed it anyhow! 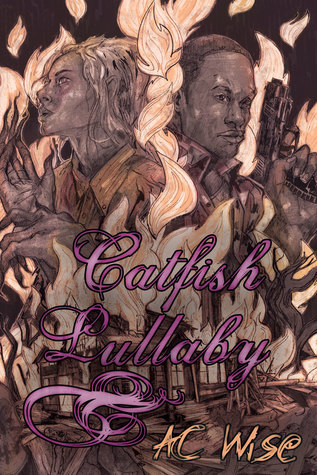 Your newest release (and first longer-length work!) is Catfish Lullaby, a gorgeous Southern Gothic novella from Broken Eye Books. Tell us how this story came to be.

It started as a short story, inspired by misheard song lyrics. You know, the usual way authors go about creating novellas. My family and I were at a state fair in Florida. There was a band playing in one of the tents where we stopped to get out of the sun and have something cold to drink. Due to tent acoustics, and a questionable sound system, I couldn’t hear what the band was actually singing about, so I chose to interpret it as a song about a myth/tall-tale/legend, someone or something walking into or out of a swamp, leaving only footprints behind. It’s highly unlikely that they were singing about anything remotely of the sort, but I thank them for the inspiration nonetheless!

Much of speculative fiction deals with outsiders coming to learn their “strange” talents have value. What talent do you have that you have also discovered to be invaluable?

It hasn’t proven useful yet, but I’m really good at breaking computers and technology in unusual ways, just by interacting with them. If humanity ever finds itself in a robot uprising, or with a computer counting down to launching doomsday devices, I expect to be invaluable. Just call me Newton Pulsifer.

This book feels like a fantastic companion to Cherie Priest’s recent book The Toll, which also explores folk tales and monsters in the South. Is there something about the South that makes it perfect for these kinds of stories? The South feels like a character all its own!

I really need to read The Toll! It seems Southern Gothic has been enjoying a bit of a revival lately, or maybe it’s just because I’m paying more attention at the moment. That said, I do feel like the South lends itself to tales of the monstrous and supernatural. There’s a certain kind of Southern setting, the one I tried to capture, that is particularly perfect – a small town, surrounded by deep woods, with more trees than people, where even your closest neighbors are a drive away. It’s a setting that simultaneously breeds isolation, and a sense of claustrophobia. Everyone knows everyone else, and have for generations. Outsiders are viewed with suspicion. Secrets grow in the soil, and there are plenty of shadowy places for rumors to grow into legends, and impossible things to hide until such a time as they choose to make themselves known. You can’t discount the heat as a factor, either. Oppressive, close, it slows everything down, gets inside your skin and lungs, it makes the sense of being trapped that much worse. Or maybe that level of heat and humidity is just what horror looks like to a Canadian…

This book talks about monsters, both real and imagined. Which, do you think, is worse?

The real ones. Part of the reason why I think horror is so appealing is that it turns the monstrous into something impossible and exaggerated, but also something that can be conquered. It gives us hope that survival is possible. And even bleak cosmic horror where humanity loses out is something we can walk away from when the book is over, or the movie ends. We can leave it safely in the realm of the imaginary. Real life horrors are much more insidious and harder to defeat.

How much inspiration for your fictional monsters comes from your pets?

Ha! None yet, but I could see it. “The night the snacks ran out, the humans came to understand the true horror of…The Hungering Corgs!” I could also imagine a monster that very slowly drowns its victims in wave after wave of shed fur.

How is writing a novella different than writing a short story—or is it? This is not necessarily a trick question—but maybe it also is. Was your approach to this project any different?

It may not be a trick question, but I may give a trick answer? The novella started life as a short story, so my approach wasn’t really all that different. It was mostly a matter of expansion. One nice thing about writing at a longer length is there’s more room for scenes, characters, settings, and even individual moments to breathe. One of my favorite scenes in Catfish Lullaby is a quiet moment where Caleb and Cere talk and eat ice cream. It’s the kind of scene that might not have survived in a short story requiring a tighter focus.

There is a definite Lovecraft vibe to this story—fucked up families and secrets and such. What other works/authors might you count among your inspirations?

For dark fiction with Lovecraftian overtones, I would point to Caitlin R. Kiernan, Livia Llewellyn, John Langan, and Gemma Files as inspirational. They all write fantastic stuff in varying shades of twisted, horrific, and fucked up.

Which Hogwarts house did you get sorted into?

I haven’t been officially sorted, but I feel like I would be a Hufflepuff.

As is right and proper.

This almost feels like a new Golden Age of books because everyone is writing the most amazing stuff. What have you read lately that is Gorgeous and Outstanding and readers should absolutely get?

Aaah! So many things! I will try to limit myself to just a few suggestions… Under the Pendulum Sun by Jeannette Ng, Riverland by Fran Wilde, An Unkindness of Ghosts by Rivers Solomon, Gods of Jade and Shadow by Silvia Moreno-Garcia, The Luminous Dead by Caitlin Starling, and the Poppy War by R.F. Kuang. There. That was kind of restrained, right?

I recently completely my first novel and its now out on submission, looking for a good home. Eep! I’m also working on a handful of short stories/novelette type things. My laptop exists in a perpetual state of chaos, with half-finished documents in various stages of completion scattered everywhere.

Look, just consider Badger Lullaby, that’s all we’re asking. Thanks for coming by! Readers, go enter to win your copy of Catfish Lullaby, or just buy a copy, because you’re not gonna wanna wait!